A small but exasperated group of protesters gathered on Staten Island tonight to denounce a grand jury’s vote not to bring criminal charges in the death of Eric Garner, accusing the Staten Island justice system and the NYPD of once more discriminating against communities of color.

Livid locals rallied at the Tompkinsville site where Garner, a black Staten Island man, was placed in a chokehold by a police officer in July and died. The death spurred outrage and also hope that the Republican Staten Island District Attorney Daniel Donovan could indict the officer, Daniel Pantaleo, for allegedly killing Garner–those hopes were dashed today when Mr. Donovan announced the grand jury decided not to charge Mr. Pantaleo, a Staten Island resident, with a crime.

“Everybody saw that the man was murdered. He was begging for his life,” said Kevin Buford, a resident of the nearby Park Hill Apartments. “We know that the DA directs things the way he wants them to go. That grand jury–they should call it a sham jury. It’s not a grand jury.”

Police targeted Garner for illegally selling cigarettes in the neighborhood, a gritty enclave with startling vistas of New York Bay. His resistance to arrest, caught on video, culminated with police placing him in a chokehold while he cried, “I can’t breathe!” Unlike in the highly controversial case of Michael Brown in Ferguson, Mo., Garner’s arrest was videotaped, leading some community members and elected officials to believe that an indictment was possible.

The rally tonight, which lasted several hours and never seemed to attract more than 50 people at a time, was relatively subdued, a stark contrast to the violent protests that roiled Ferguson last week after a Missouri grand jury voted not to indict a white police officer for shooting to death the 18-year-old Brown. Police descended on the borough but mostly stayed out of view–elected officials like Council Speaker Melissa Mark-Viverito, Public Advocate Letitia James and Bronx Councilwoman Vanessa Gibson, the chair of the Council’s public safety committee, addressed the rally in the wet cold. News trucks, cameramen and reporters almost seemed to outnumber protesters and pols.

The rhetoric, for the people gathered at the makeshift Garner memorial on Bay Street, could be hot, but few had an appetite for confrontation or even a long march. Several shouted “fight like Ferguson” or “I ain’t worried about ISIS, I’m worried about the cops,” while many huddled solemnly on the sidewalk, the bright red-and-white awning of DeJoy’s Red Top Cars glowing above them.

One man blamed Mr. de Blasio and his Police Commissioner Bill Bratton for Garner’s death, accusing the Democratic mayor of appointing a top cop who once served under Republican Mayor Rudolph Giuliani.

“People who have lived in the city long enough have known what Bill Bratton means for communities of color,” said Josmar Trujillo, an East Harlem organizer with the group New Yorkers Against Bratton. “What else can you say when you brought back a police commissioner from the Giuliani days?”

At least one protester had walked from the Staten Island courthouse where the grand jury deliberated on the Garner case to the memorial several blocks away. Wearing a Guy Fawkes mask and a checked shirt, he stoically clenched a cardboard sign. 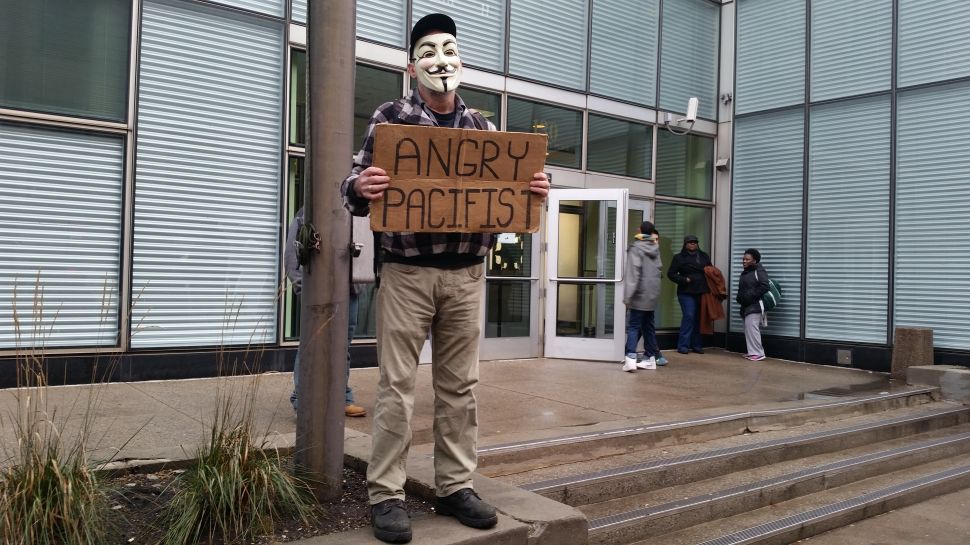