Elected officials rallied with union leaders and community groups outside City Hall today to promote a bill that would prevent employers from inquiring early in the hiring process about potential employees’ criminal backgrounds—which the law’s proponents allege leads to discrimination and recidivism.

The bill’s sponsors, Brooklyn Councilman Jumaane Williams, Manhattan Councilman Corey Johnson and Bronx Councilman Ritchie Torres joined with Manhattan Borough President Gale Brewer and supporting Councilman Andy King of the Bronx and Danny Dromm of Queens. Also on the scene were activists from 32BJ SEIU and VOCAL-NY—all arguing in favor of the “Fair Chance Act,” which would prevent private employers from asking if job applicants have past convictions, and instead force them to leave background checks until after they have extended a conditional offer of employment.

“This bill will ensure that all New Yorkers, including those who have become stigmatized because of a previous conviction, will be able to compete for jobs for which they qualify. As a matter of fact, if there are some people who need employment more than some others, it might be those who have just come home,” said Mr. Williams, arguing that inability to obtain a job can lead to repeat offenses. “These are the same people who are often stigmatized and discriminated against and are being pushed to have a cycle that we want, that we need to break.”

Mr. Williams and his colleagues noted that laws are already in place outlawing discrimination based on criminal history except in select circumstances, which the new bill would not impact, and that former Mayor Michael Bloomberg issued an executive order requiring for city agencies a similar policy to what the Fair Chance Act would mandate for private enterprise. They claimed that many employers are currently able to unfairly and illegally discard the resumes of those who check a box on job applications indicating they have a criminal history.

“All New Yorkers should be considered for jobs solely based on their qualifications,” said Ms. Brewer, who first proposed the bill last session as a Manhattan councilwoman, taking aim at those who might claim that the bill could endanger the public. “All state and federal laws that exist now will continue to exist. We will not have pedophiles working in schools, or people who rob banks working in security. So stop thinking that’s an impediment. It’s not!”

She also claimed that business leaders she had spoken to supported the Fair Chance Act.

Mr. Torres was one of several of those present to connect the law to longstanding claims that nonwhites face discrimination in the courts and from law enforcement

“I feel there’s a critical connection between the struggle for fairness in the job market and the struggle for police reform, which is not only unfolding here in New York City but across the country,” Mr. Torres said. “It’s about our criminal justice system, about the fundamental unfairness of a criminal justice system that denies a fair chance to communities of color.” 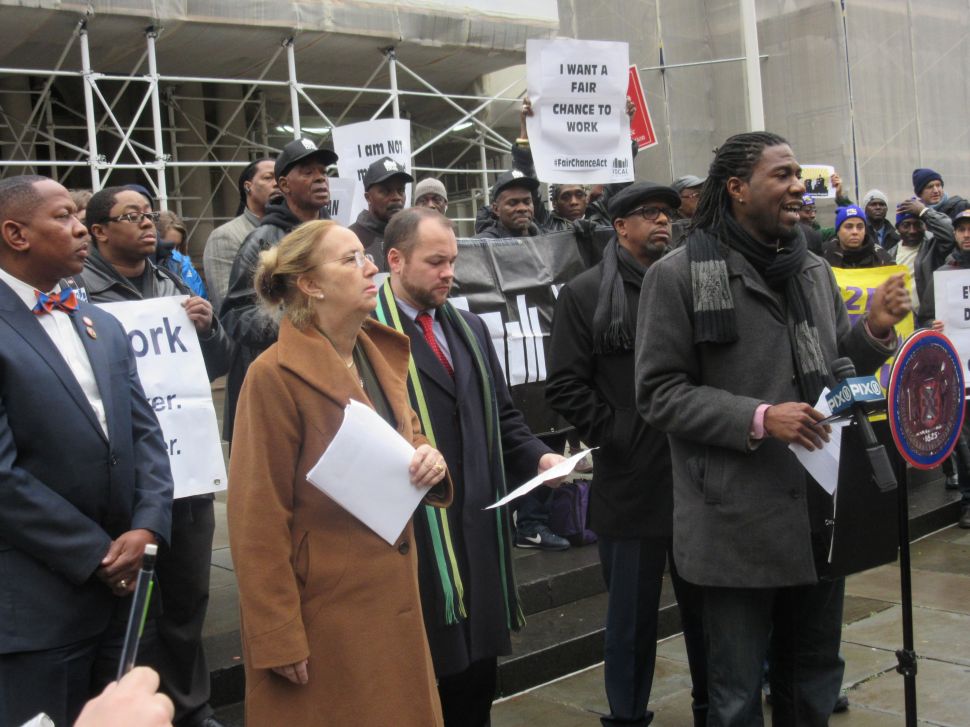