Walking today on the Upper West Side, I noticed recently placed phone booth advertisements on 68th & Broadway that featured a picture of Colin Powell with the tagline: “This is what happens when there is no second opinion. Iraq War: No WMDs, 141,802 civilian deaths. Go to RT.com for the second opinion.” RT.com (formerly Russia Today) has similar ads that feature former President George Bush with the same message. In short, the Kremlin-funded Russian TV station is using street advertising in NYC to influence the American people.

It’s a stroke of Machiavellian genius and continued proof that in the world of media and public relations, Russian strong man Vladimir Putin is without equal. Putin has repeatedly pulled off PR stunts to enhance Russia’s image. From walking through Siberia shirtless to “finding” two ancient amphoras’ on a dive, the man is brilliant at manipulating the media for Russia’s political interests.

As Mr. Putin’s politics are opposed by much of the free world, the strong man continues to act as he pleases, his government funds advertising buys on the Upper West Side of Manhattan even as his currency faces collapse. Talk about uber-confidence. Through a regular stream of media, Mr. Putin has justified Russia’s defiance of much of the world. He knows that a war-weary America with a liberal President at its helm means he has a strong position.

RT’s so-called “second opinion” comes courtesy of Russia’s Prime Minister who in September 2013 wrote an op-ed in the New York Times that urged the American people to oppose a U.S. initiative for military strikes in Syria. Thus far, America has not attacked Syria. Russian interests were protected, and Syria’s dictator Assad remains in power. He won then and continues largely as he wishes.

Mr. Putin’s forces continue to occupy areas of the Ukraine, and he acts acts without fear worldwide, despite the fact that President Obama had proclaimed that “there will be costs” if Russia intervenes militarily in the Ukraine. Russia occupies Ukraine—and the only costs I have seen are the bills which the Kremlin is receiving for ad buys in my backyard.

Mr. Putin, whom Forbes named the most influential person in the world is a brilliant tactician. Russia used the Edward Snowden affair to its advantage to make the case that America was a bully—meanwhile, despite all of America’s huffing and puffing, Snowden continues to enjoy Russian hospitality.

From the Sochi Olympics, to the release of the world’s most famous Russian political prisoner, Mikhail Khodorkovsky, Mr. Putin has positioned himself in certain circles as a humanitarian. At the time of the Snowden affair, a Russian political analyst was quoted as saying, “What happens now doesn’t matter because public opinion in Russia has already been shaped—America is lying, dishonest and has double standards.” That narrative continues with advertising on the uber-liberal, wealthy Upper West Side—wise positioning for the Russian premier.

Mr. Putin, who has spoken of the fall of the Soviet Union as “the greatest geopolitical catastrophe of the 20th century” pursues his precise agenda of strengthening the Russian empire with ads in the right areas focused on what was a very unpopular war.

RT editor-in-chief Margarita Simonyan noted: “Alternative voices, however rare, are often met with fear, hostility and bureaucratic obstructionism in the attempt to stifle them—because they are inconvenient to the establishment. We want the viewers to know that no matter what, RT will remain THE place to go to for that second opinion.”

As one who has Russian TV running in my house all day due to my Ukrainian-born, Russian-speaking wife, I know that Putin continues to pursue his agenda impervious to America’s impotent threats. President Obama was caught by a live microphone in March 2012 telling President Dmitri Medvedev of Russia he would soon have “more flexibility” on Russian issues: “This is my last election. After my election I have more flexibility.” Mr. Obama’s “flexibility” sees ads from Putin influencing America’s world on the Upper West Side—simply amazing.

As Putin continues to win politically and in the media war, I find solace in the fact that at least my kids speak Russian. 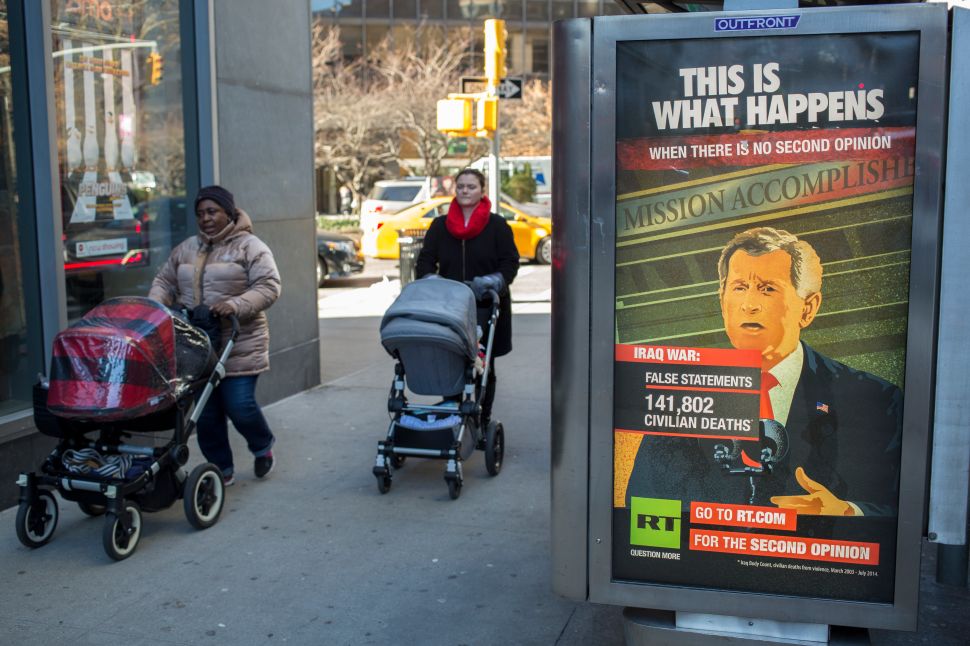