Well, all sorts of fancy types seem to be involved with the sale for $10 million of the six-bedroom townhouse at 121 West 81st Street recorded today in city records. As the Times had it in the spring, when the house went on the market asking $12 million, the seller was Lisa Belzberg, the founder of Pencil, an equity-in-education nonprofit—and the former wife of Seagram heir Matthew Bronfman. And indeed the Lisa Belzberg 2003 Residence Trust appears on the deed, along with trustees Andrew Farkas, chairman and CEO of the Island Capital Group, a real estate merchant banking firm, and Merryl Tisch—chancellor of the New York State Board of Regents and wife to Loews heir James Tisch.

That’s quite a lot of firepower! And the buyer, naturally, is no slouch either, being Denis Hickey, CEO of Americas for Lend Lease, an international property and infrastructure group.

According to the listing held by Brown Harris Stevens’ Norah Burden, the home, which dates to 1900, has been both restored in its historic detailing and renovated in modern style. The latter is perhaps most visible in the garden floor kosher kitchen, which sports a zinc-top center island and gleaming Viking stoves.

More classic details include an original mantle of carved wood, intricate door frames and banisters and a small, paneled office toward the front of the home. A cozy library features built-ins, a fireplace and an en suite bath, lest studious residents be distracted from their reading by clamor at large during trips to the loo. And a third-floor mezzanine with 10-foot ceilings has a wet bar, lest users of the media room—also on the third floor—be forced to go downstairs to get drunk.

When the Times visited, their reporter seemed unduly impressed by the addition at the back of the home of a wall of steel and glass, which features French doors and Juliette balconies. It’s pretty, to be sure, but also pretty standard in townhouse renovation nowadays. The Observer, for one, is far more enamored with one of the home’s more timeless features, which is to say the bar. 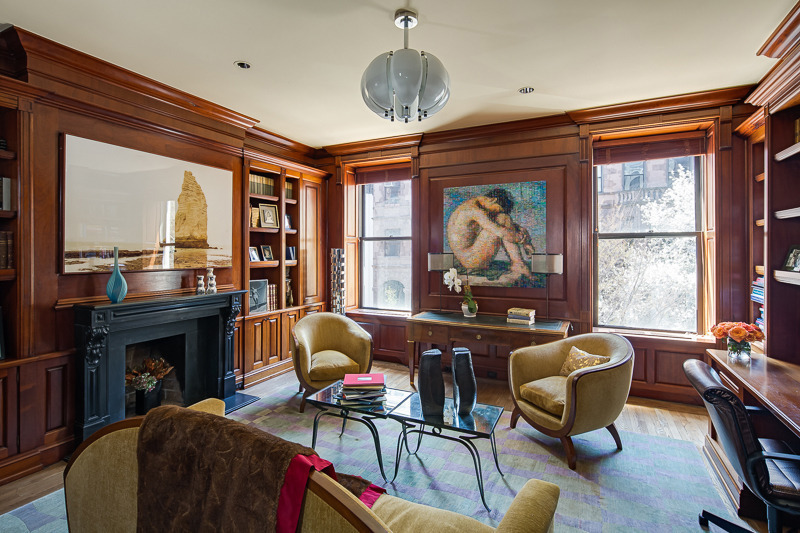