In regards to “Acts of War,” the show ended on such a hideously disturbing note that it’s hard to discuss the episode in the usual conversation concerning plot points, character development and the innocuous storytelling tropes that have come to define teen dramas.

Last month, the prospect of a rape scene on the show leaked online and fans bitterly opposed the prospect of watching Mary undergo a sexual assault. This led to over 1300 horrified fans singing an online petition to get the storyline scrapped.

I’m not particularly opposed to the portrayal of sexual assault on screen. It’s certainly a horrifying epidemic in the present day and undoubtedly more so in a historical period where the worldview was more unapologetic about viewing women as property and it’s almost surprising that the physical violation of women hasn’t come up as a more common occurrence throughout the show’s run. The show doesn’t seem to pull punches when it comes to mutilation, torture and other archaic forms of body horror. Even still, if you’re going to write that kind of assault into your show you still have to wrestle with how it will be depicted and if throwing that kind of imagery out there is even worth what you’re trying to achieve. After having seen the episode, I’m not sure having Mary being held down by two Protestant insurgents posing as castle guards, at one point being gripped by her throat, and then violated during a POV shot was really worth serving as an inciting incident.

It’s worth noting that Mary Stuart herself was the rumored victim of a rape in her post-Francis years, so it wasn’t historically necessary for the writers to introduce the assault. However, at this point, so many historical liberties have been taken with the timeline, characters, personalities and — in the case of Bash — the existence of the figures in question that calling out almost anything as a flagrant historical inaccuracy is moot.

Post-assault, Mary shares a heart-wrenching scene with Catherine where she too admits she’s been the victim of sexual assault. Catherine is empathetic to her daughter-in-laws trauma and advises that Mary bottle up the trauma and address her subjects under the guise of a strong, unshakable monarch. Catherine is trying to instill in Mary that she’s a survivor, because given her pragmatic nature, surviving is what she does best. However, to TV Junkies writer Eleni Armenakis, Catherine’s counsel “…fed into a culture of shame that encourages survivors to keep silent.”

One of the most appealing and intriguing aspects of the show was how the narrative dealt with young women trying to advocate for themselves and their believes in a time that was restrictive and outwardly hostile to their own agency. This episode saw Greer being duped by Castleroy  into a Protestant plot to overthrow the king without her consent and Claude being bandied about by Mary and Catherine as a marital bargaining chip in order to end political and religious discord within France. We can assume that the show will eventually rely on Greer and Claude’s own agency to extricate themselves from unwitting treason and a royally mandated marriage. However, I’m a little nervous that the show will rely on the old male gaze trope of experiencing the aftermath of Mary’s rape through the lens of Francis’s rage rather than Mary’s viewpoint as a survivor. We saw a similar misguided viewpoint earlier this year in Downton Abbey when the aftermath of Anna’s rape revolved around hiding it from Bates so that he didn’t murder her assailant.  However, this show has a way of surprising me, so hopefully, this will be one of those times. 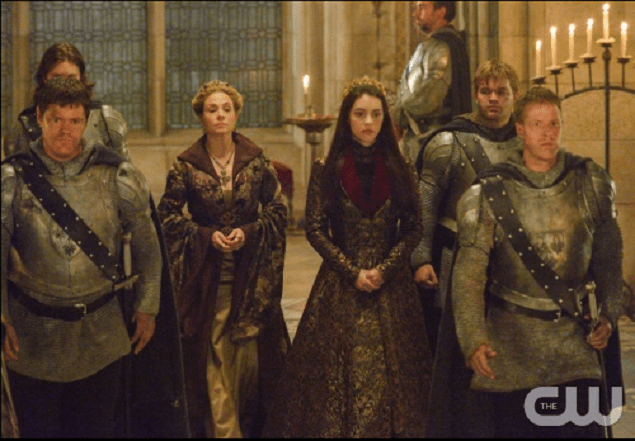