The Howard Hughes Corp. wants to invest a billion and a half dollars in and around the South Street Seaport. This being New York, not everybody is on board with the plan. Some apparently prefer the neighborhood’s economic malaise and untapped potential to the dynamic change Hughes would bring. Hopefully, as the Hughes proposal moves through the city’s land-use bureaucracy, saner voices will prevail.

It has been more than a generation since South Street was transformed from a tired relic of the city’s past into an attraction for tourists and, yes, even the occasional Manhattan resident (although good luck finding one who’ll admit to it). Authentic it wasn’t, but the bars, restaurants, museum, and tall ships berthed adjacent to the Pier 17 shopping mall at least added some vitality to one of the city’s oldest commercial districts.

Recent times have not been kind to the Seaport area. The recession of 2008 brought a noticeable decline in business, but it was Superstorm Sandy two years ago that literally wiped out portions of the neighborhood. Pier 17, which for some New Yorkers symbolized the Seaport’s brilliant reinvention nearly three decades ago, re-opened briefly but it is now just a memory. So are many of the small shops that made the area a must-see stop on any tour of Manhattan.

The Hughes Corporation, which leases the Pier 17 site and other locations in the area, wants to build a 42-story tower outside of the seaport’s historic district, on the site of the old Fulton Fish Market, which moved to the Bronx in 2005.

As part of the company’s broader strategy to revitalize the area, it plans to spend about $300 million to redevelop Pier 17 and to add other public amenities. In response to neighborhood concerns, it included a new middle school on several floors of its proposed tower.

Some neighborhood residents want to keep things as they are. They envision the old fish market as a community marketplace where artisans can hawk their wares, from fresh fish to cheese to produce, to like-minded consumers. But the city doesn’t lack for public markets, and the neighborhood itself needs more than artisans to bring back its vitality.

Several key elected officials are lining up to oppose the Hughes plan. That’s unfortunate, for their vision seems clouded by a longing for a Manhattan that disappeared a long time ago, if it ever existed at all. The seaport district needs a jolt of old-fashioned capital, and Hughes is eager to provide it. And that capital will create businesses and new residences that will transform the neighborhood for the better.

South Street, vibrant, noisy, tumultuous, profane, and pretty darn smelly, serves as a reminder of New York’s roots as a seaport and as of its place in the world of global trade. It has always been a place of change and reinvention.

The Hughes project will re-imagine the neighborhood for the 21st century. It deserves support from local officials. 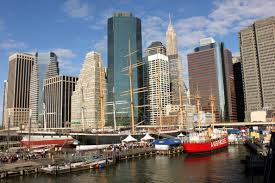