For one aide to a Republican State Senator, Melissa Mark-Viverito is anything but golden.

John Quaglione, the deputy chief of staff to State Senator Martin Golden, called for Ms. Mark-Viverito, the Democratic council speaker, to resign from office following the murder of two police officers on Saturday. After he tweeted at Ms. Mark-Viverito that she is a “disgrace,” Mr. Quaglione, a former GOP City Council candidate, stood by his comment today.

“The City Council doing the ‘die-in’ was really the point where I said to myself, this lady has taken the City Council to a whole different style of governance,” Mr. Quaglione told the Observer, referring to the day when City Council members lied down outside City Hall to protest a Staten Island grand jury’s decision not to indict a police officer in the death of Eric Garner.

“All the City Council members that joined in with her, it was absolutely disgraceful. She’s the mayor’s pick, so if the mayor is trying to get control of this city here, he’s got to rein her in or she has to move on. She’s definitely part of the problem,” he added. (Ms. Mark-Viverito did not actually take part in the “die-in” and traffic-blocking protest outside City Hall, though she was in support of activity.)

Like a couple of police unions and some conservatives, Mr. Quaglione blamed Mayor Bill de Blasio and Ms. Mark-Viverito, a close ally of the mayor, for creating an anti-police atmosphere that led 28-year-old Ismaaiyl Brinsley to ambush and kill Officers Wenjian Liu and Rafael Ramos on Saturday. Mr. de Blasio and his allies rejected that reasoning.

“@MMViverito You are a disgrace – you have shown no respect for #NYPD- don’t act like you care now @BilldeBlasio #BlueLivesMatter,” Mr. Quaglione tweeted from his personal account. He also tweeted at Ms. Mark-Viverito “resign – you show no leadership – we need a real leader.”

On Saturday, Mr. Golden said that it was “unfortunate that our city has back tracked on 40 years of police relations. Our NYPD have become targets of violence, and this cannot be allowed to go unanswered.” Mr. Golden did not disavow Mr. Quaglione’s call for Ms. Mark-Viverito to step down.

“Our office does not comment on personal opinions offered by staff on off
hours,” said Ray Riley, a spokesman for Mr. Golden. “John expressed an opinion which all New Yorkers have the right to.”

Mr. Quaglione is the second Brooklyn Republican staffer in the past week to make a controversial remark about a City Hall Democrat. Liam McCabe, an aide to Congressman Michael Grimm, called Mr. de Blasio an “asshole.” Mr. Grimm said Mr. McCabe would be disciplined.

This story has been updated to reflect that Ms. Mark-Viverito did not participate in the “die-in” outside City Hall and that Mr. Quaglione did not delete one of his tweets. 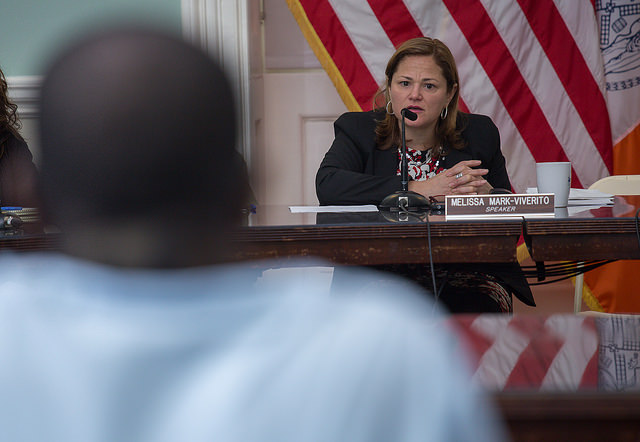