After being told last week that someone will die, of course we have an episode where every character probably should. Tensions are high between Victoria and David over his debt and affiliation with Malcolm Black, aka Canadian Conrad, who Victoria seems to know. She wants David to pay Malcolm or go to the FBI, instead of blackmailing him, which may be the only good advice she’s ever given. Like last week, David’s trust in V seems to have gone the way of his beard. He’s not buying what she’s selling.

With the information Ben gave her, Emily figured out that Agent Kate works for Malcolm Black. Of course she pursues this with Nolan’s hacking expertise and access to technology I’m not even sure exists. Em handles a fingerprint reading laser and an invisible sticker camera like it’s something she does everyday. I’ve said this before, but it’s still so true – The FBI should totally hire Emily.

Jack’s not just a crummy cop. Now he’s a crummy cop blinded by yet another pretty sociopath in The Hamptons, Agent Kate. We probably all reacted to Jack kissing her the way that Em reacted to Nolan punching her wooden boards. Don’t do that.

Daniel and Nolan are both making amends this week, first Daniel with Margaux, and then Nolan with Louise. Nolan invites Louise to cohost an event with him, where his attraction to her reminds us of his fluid sexuality. They dance, flirt and get the cool social media nickname #Lolan, which is weird because they both kind of look like Lindsay Lohan.

Daniel’s reconciliation is much more complicated and not only about Margaux, who seems to get even more French when she yells at him. Surprisingly, ice queen Victoria is the one who warms Marg up to the idea of forgiving Daniel. Not so surprisingly, V handles the exciting news of her first grandchild by reaching out to her estranged son via text message. Classic Victoria.

At first it just seems like Daniel is being reflective about fatherhood, but after he has not one, but two flashbacks about his father it’s clear. Daniel is the one who is going to die. For a minute we think Victoria may be getting offed, but in the world of Revenge bad people live forever. If they didn’t, Em would have to get a hobby.

It seems like Victoria could be killed off only after David visits his celly (prison roommate). David is given powdery bag of stroke inducing poison from a guy who totally shouldn’t have gotten paroled. I assumed it was for Agent Kate or even Malcolm Black until David deliberately puts it in V’s wine. In his defense, who hasn’t wanted to kill Victoria? She confesses to betraying him and vaguely implies that David killed his wife, which is one of those things on this show that seems like it should be explained but never will. David already seems to know about her betrayal, or he’s just crazy and is killing her because it’s murder time. Still, that would’ve been boring compared to the actual death they had in store, but more on that later.

Somehow Emily gets Jack on board with her Scooby-Doo-esque rouse at Nolan’s event, where they plan to steal Agent Kate’s secret phone. Jack is basically like, “I’ll do whatever you want as long as you’re nice to me,” and just like that he turns on the lady he’s been kissing (and probably more). Side note: Who knew secret phones were the same size as Zack Morris ones?

Agent Kate confronts Emily, both about being a phone thief and Amanda Clarke, but is so quick to try and team that it feels like a set up. Kate works for Malcolm Black, but claims she does this because he has her mother. It’s a real “I’ll save your dad if you save my mom situation” and Emily sees right through it. Kate’s fatal mistake is trying to play on her emotions, because like normal childhood memories, Em doesn’t really have any. In reality Kate is Malcolm’s daughter, so her and Emily still have a bit in common.

What ensues is probably the best fight scene between Em and anyone in all four seasons, which is saying a lot considering her major rage issues. It ends brutally when Kate uses Emily to break her fall from the second floor. In between dead dad flashbacks on the beach, Daniel sees this and comes to his ex wife’s rescue just in time to take a bullet for her. All I could think was, “Victoria is going to be so pissed.”

Jack then shoots his date from a few hours before, because he’s Jack and his life is the worst. At least he kind of cracked his first case and graduated to a maybe-not-so-terrible-cop? Poor Jack, but also poor Emily. She seemed to actually care about Daniel, and not only because of their relationship in real life. Em is such a natural at revenge that she got Daniel back for shooting her, and she didn’t even want to. This really is her gift and her curse. 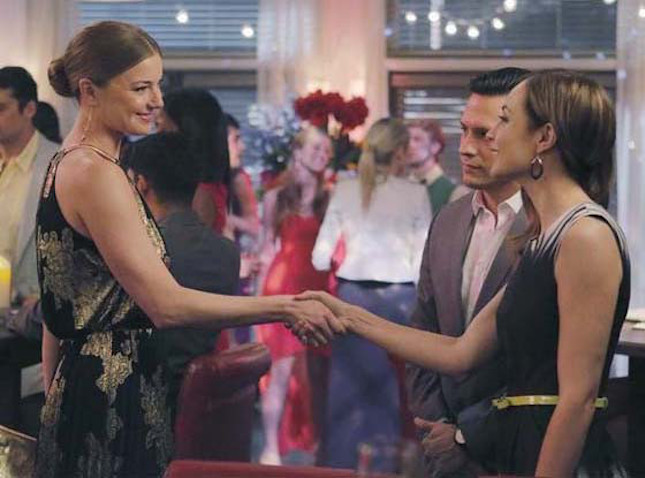