David’s beard is gone, so really anything is possible this episode. Now would be a good time to review where we left off two weeks ago. David and Victoria were attacked in the hospital by two mystery men and saved by Emily, who looks like she’s auditioning for one of the Kill Bill movies. Em captures one of these contracted goons and plans to torture him to find out why another person wants her dad dead.

The remaining goon winds up in police custody just in time to interrupt Jack’s date with Agent Kate. When they arrive to question him he turns up dead in a suspicious, potentially staged suicide. Lucky for Jack, Agent Kate is not fazed and still seems pretty DTF.

Em takes a break from torturing to answer the doorbell, only to be tortured by Ben with another romantic proposition. Em eventually accepts his offer just to probe him for information since Jack is useless. She needs a man on the inside of the investigation and it helps if that man wants to make out with her a little.

Meanwhile Nolan frees Emily’s hostage and lectures her about torture. He’s like a frenemy and father figure all in one well dressed, rich package. He’s tracking the guy he released too, so you can’t stay mad at him for very long.

Nolan has also been faced with the dilemma of clearing his name in exchange for being a bad person. Given her severe mental illness, it’s strangely sad how Nolan and Margaux conspire to take down Louise. You almost forget that Louise tried to kill Marg, but she totally did. Still, if anything, her creepy photo projects of Victoria should give her a crazy pass.

In both their defense, Marg and Nolan have both been through a lot lately. Margaux was victim of infidelity, attempted murder and a terrible haircut. Nolan was slandered and threatened by someone he looked up to. Going after Louise seems like the only solution for both of them, until David apologizes to Nolan. “You owe me a reputation, a cell phone and about 23,000 twitter followers,” he fires back. Classic Nolan.

He eventually prioritizes being compassionate with Louise over clearing his name. Nolan’s lack of cooperation really screws over Margaux, who we later learn is raging with pregnancy hormones. More on baby Dangaux later.

Any allegiance David felt towards Victoria seems to have been shaved off with his beard. She is so desperate it almost overshadows her calculating behavior. V asks Daniel for help starting over with David, as if having him and his ex-wife (who he shot) act like super happy stepsiblings wouldn’t be weird at all.

With no other options, Victoria uses the one pawn left in her game – Police Chief Alvarez. Given his position of power, Alvarez almost seems like he could be a player high up in this conspiracy. That is, until you realize how much of a dope he is. Clearly V let him smell her neck a while back and he was like, “Uh… you can have my gun.” He is a weak, opportunistic man, but he’s no criminal mastermind. The real issue is much higher up and better looking.

That’s right, it turns out that Agent Kate is not terrible at her job. She’s actually really good at it, but it’s just that her job is being a bad guy. Making Jack think he’s a great cop is a part of the gig. So for those of us keeping score, Jack’s dog is dead, his dad is dead, his brother is dead, his wife is dead, his bar burned down, he can’t escape a childhood crush who keeps catching him in her crossfire, and everyone thinks he’s a terrible cop. As if he wasn’t the show’s punching bag enough already, now the first woman to hit on him all season is part of a huge criminal conspiracy? Poor Jack.

If Victoria’s source is telling the truth along with David, then Kate works for Malcolm Black, a Canadian arms dealer. Think of this guy as Conrad’s evil twin, who’s been harboring David all this time. David proves to be plagued by the same hereditary hubris as Emily, and sets out to blackmail Canadian Conrad. Sure, that’ll get him to stop trying to kill you.

Despite the fact that David is in danger, Victoria is mostly just psyched to have some leverage. She confronts David and he comes clean about Malcolm Black, unknowingly giving V want she wants – A way to protect him while destroying Emily. Victoria tells Black’s team that getting Emily will get them whatever they want from David. She’s still got it, and by it I mean sociopathic tendencies.

An episode of Revenge would not be complete with only one bombshell. According to the preview, someone is getting offed next week. Though we’d be happy to see him go, Ben is still an obstacle and potential resource for Emily that should be kept around. More likely, Margaux may be the one to go. After all, The Hamptons have proven to be no place for children. Seriously, did Jack give Baby Carl away to the nanny or what?

Losing Marg would not affect the storyline as much as keeping her on as some pregnant media monster who probably pronounces “baby” as “bébé.” Who knows, it might be worth it just to see Victoria cope with the idea of being a grandmother. 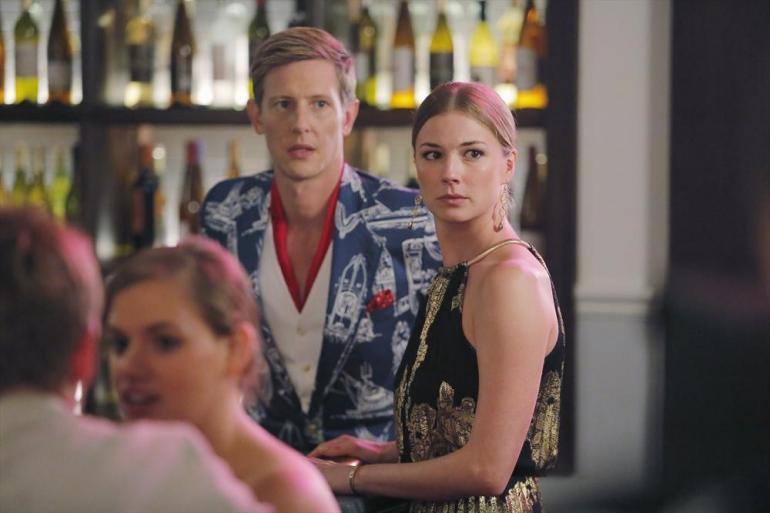