If you feel left out of the whole Twin Peaks phenomenon, we’re here to help! Every week, associate tvDownload editor Vinnie Mancuso attempts to figure out what the hell is going on in this town, while senior editor/Twin Peaks expert Drew Grant answers his questions. This week: ‘Cooper’s Dreams.’

Let’s recap, shall we, the things Drew has taught me so far on this dark road we call Twin Peaks, and see if I’m any closer to understanding…anything: BOB is the most terrifying set-dresser on any TV set ever, but BOB and one-armed Mike are not the same as Mike and Bobby and also not the same as themselves when they’re not sleeping, the owls aren’t anything you think except phenomenal DJ’s, and basically Twin Peaks is like the time Drew tried to potato-peel herself while on Ambien.

Let’s begin things, as all things should begin, with Margaret the Log Lady. The Log Lady’s log, so far, is the most credible witness that anyone has in the Laura Palmer case. It not only knows more information about what happened that night, but is more charismatic than James. #Log4StarringRole. Anyway, with Margaret doing all the talking, the log relays to Dale Cooper and Co. that it saw two men and two girls the night Laura Palmer was murdered. There were some owls and some laughter, presumably not from the owls but that’s not clear. Eventually everything got sort of quiet and dark. You know what? I think someone was definitely murdered that night.

With all that helpful log-formation the detectives head back out into the woods, where they stumble on to yet another log cabin in the woods. Bad news, this one contains not one sentient log. Good news, it quite obviously contains the entire murder scene and countless pieces of evidence. You take the good with the bad, I suppose. But there’s a pretty hefty pile of blood, a Myna bird and a camera with film in it, along with a cuckoo-clock filled with One-Eyed Jack tokens that Laura Palmer apparently used like a candy machine before she was killed.

Elsewhere in Twin Peaks, Donna and James are hard at work making me hate them. Early on we learn that James’ parents are not, in fact, dead — his mother is an alcoholic prostitute and his dad, even more tragically, is just a musician. But the secrets of James’ past don’t stop him and Donna from trying to get to the bottom of Laura’s case, either. “[Laura] is out there wandering like a restless spirit,” James says. Yeah, wandering and like, watching you guys make out and stuff.

These two recruit Madison into their detective work, and Madison is shocked they might be on to something. “We have some ideas,” James says. No, you don’t. You have no ideas. About anything. Ever.

Madison finds a record tape (not to sound my age but am I saying that right? “Record tape?”) in Laura’s old hiding spot. Unfortunately Madison has no tape player, so who know what batshit banana crazy stuff is on that thing.

Doctor Jacoby is…pretty terrific at his job, actually. He gets right to the core of Bobby by asking if he cried the first time he and Laura made love (works every time). Turns out it’s Laura who sort of dragged Bobby into the dark seedy underbelly of Twin Peaks, not the other way around. Bobby gets emotional and breaks down into tears, before we slow-dissolve into an eagle soaring majestically into the sunrise just to remind you that this show was made a long time ago.

Audrey is seriously the Batman to Donna and James’ like, Bulk and Skull. While D&J have super secret detective meetings in public diners, Audrey is busy strong-arming a guy into getting a job at the mysterious perfume counter, and snooping around to find some pretty hefty information. She now knows not only about her father’s infidelity, but his plan to burn down the Packard Mill. The will to bone Agent Dale Cooper is a strong motivator, I suppose.

Leland Palmer once again demonstrates he is the worst party guest, prone to dancing by himself, which is a strange choice when Ben Horne makes it clear that the God of Thunder himself is in attendance.

This episode ends (not including Dale Cooper finding Audrey in his bed, because who didn’t see that happening eventually) with Leo Johnson returning home from a Hank Jennings ass-beating. Shelley, who has taken just about as much as she can take, busts out her tiny gun and shoots Leo. Leo makes some animal noises. It’s all very strange.

Are we to believe that Dale and Harry are taking the whole log thing in stride, or do they think Log Lady is a clearly insane person using the log as an outlet for what she saw that night? Which, wouldn’t that make her kind of not credible?

We know that Dale has some unusual methods that seem at odds with what I imagine is in the Federal Bureau handbook. He takes notes from his dreams, he throws rocks at bottles for clues, he doesn’t antagonize the local police during his investigations. J EDGAR IS ROLLING AROUND IN HIS GRAVE IN A PINK, FRILLY DRESS. So why shouldn’t Dale listen to the Log Lady’s translation of her log. Even if she’s insane, she still led them to the cabin, meaning that worst case scenario she’s a witness to the murder herself and using the log as some sort of dissociative tool. Sure, you can’t put her on the stand, but she’s been damn useful so far.

So Ben Horne is a double-crossing double-crosser? Or is Jocelyn Packard playing everybody?

I don’t think those two ideas are in opposition to each other. What we do know is that Jocelyn isn’t the innocent naif we originally perceived her to be, and that Ben Horne is going behind Katherine’s back. Honestly though, who cares about Katherine? She’s the meanest. You know who I feel bad for? Sheriff Truman and Pete, the real patsies in this development. Also for Laura, who wasted all that time tutoring Jocelyn in English. I bet she knew English all along. That faker.

Why was Audrey so upset watching Leland Horne dance crazily and all that? I actually did think her motivation for finding Laura’s killer to this point was her insatiable lust for Dale Cooper?

UH BECAUSE THAT SHIT IS UPSETTING. Have you ever seen an adult lose it? Like lose it, lose it? One time in high school I showed up to a party where there was supposed to be drugs and/or alcohol, but when I got there I saw that one of the popular girls had brought the “cool substitute teacher” (read: loved Grateful Dead/had been to Burning Man more than once) as her date. He was obviously on…something…and was doing this goofy monkey dance in the kitchen while everyone just slowly put down their red plastic cups and backed away. A couple of us huddled in the doorframe and discussed what to do. Calling the police was out of the question. But it was really unclear if the guy was drunk or high or having a psychotic break, and maybe he was dangerous? Or maybe just eccentric? Was he breaking the law just by showing up a students’ party? Was this some sort of D.A.R.E. scare tactic? Seriously, our brains might have melted that night watching Mr. Whatever-the-Fuck do his simian mating dance in the overly-lit half-furnished basement of a JV lacrosse star. It is terrifying to see an adult out of context. It makes you question everything you know about the natural order of things. Which, ultimately, is what Twin Peaks has always been about.

Am I wrong in thinking parts of Twin Peaks just don’t hold up, and not just in a “David Lynch is an acquired taste” sort of way? That eagle shot i mentioned comes to mind, but also pretty much anything Donna and James say?

It’s funny, I was thinking the same thing. At the time, I think everyone reacted to Twin Peaks like Homer Simpson:

But the problem is that a lot of this imagery doesn’t read as symbolic anymore; it reads as cheesy. All this analog tape stuff is a good example: Lynch has always been retro in his aesthetic, but pretty progressive in terms of technology. (Inland Empire was shot completely in digital.) It “reads” wrong to have a scene where a major clue can’t be uncovered because Maddie doesn’t have a tape player, because why doesn’t she just use Siri to upload the audio into the iCloud? Haha, just kidding. But any show that uses too many artifacts of its time risks becoming anachronistic on repeat viewings: what once might have been spooky now comes across as silly and old-fashioned.

The one exception being the tape recorders used by Dr. Jacoby and Cooper, which are just baller. 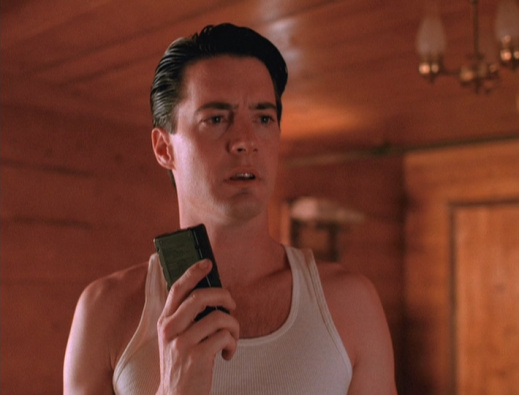 Like literally we’re 25 years in the future and my recorder is…half that size. I feel like maybe we haven’t made as much progress as we thought? 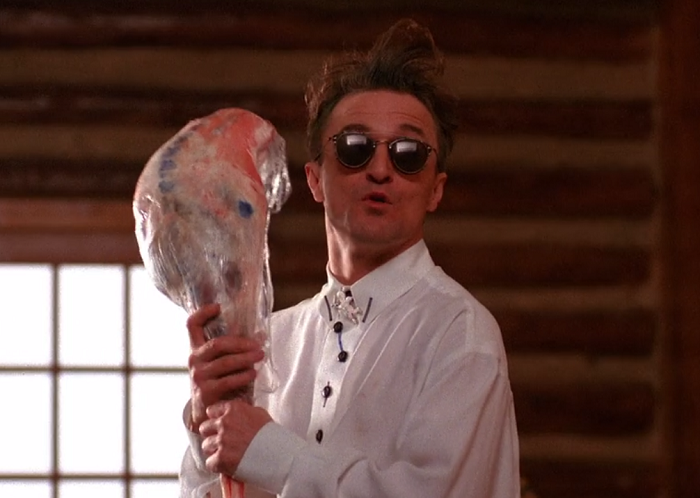