If you feel left out of the whole Twin Peaks phenomenon, we’re here to help! Every week, associate tvDownload editor Vinnie Mancuso attempts to figure out what the hell is going on in this town, while senior editor/Twin Peaks expert Drew Grant answers his questions. This week: ‘Realization Time.’

I get so, so annoyed watching this show sometimes. And then, the second I get annoyed, I immediately second guess myself. Am I supposed to be annoyed? Are the characters acting stupidly because they’re…stupid? Or because it’s “Lynchian?” What does “Lynchian” even mean? Am I supposed to say “Oh come on” approximately 18 times per episode, or is this show just flawed? Or just, dare I say it, old? How am I supposed to even feel? Am I not getting it?!

I think what I’m trying to say is, Twin Peaks is slowly but surely driving me insane.

Speaking of driving me insane fucking James man. Ugh with this guy. Ugh with his stupid face. James and Donna, now with the help of Maddie, are hot on the trail of Laura’s killer. Except not really. They just found some tapes Laura left in her bed post. Apparently, while she was alive, Laura used to get blazed off her mind and leave vaguely sexy tapes for Doctor Jacoby. It’s never technically said that she’s high but…come on.

“Why is it so easy to make men like me? And I don’t even have to try very hard. Maybe if it wasn’t so easy…” Laura says on one of the tapes before James get’s antsy and turns the tape off. No, James! You can’t commit to finding the truth about the mysterious and brutal murder of your ex-girlfriend then turn off the most solid piece of evidence ANYONE in this town has because you got some sort of jealous heebie-jeebies. For all you know Laura was about to say “…if it wasn’t so easy you wouldn’t be constantly threatening to murder me in that cabin, Doctor Jacoby.”

Long shot, but we’ll never know because James was like “Oooh, I don’t know. That’s a little much.”

Meanwhile, Audrey (not Aubrey as many, MANY people were quick to point out last week. My deepest apologies,) is in the middle of a much more successful investigation. She’s gone undercover…can we call it undercover? Technically she’s a high-school girl with a part time job going undercover as a high-school girl with a part time job. I guess it is sort of dangerous when your boss is a weirdo handing out little glass unicorns all over the place, offering jobs as a “hospitality girl” to pretty employees. Yo, Jenny, I think that means prostitute. Don’t take the unicorn.

Audrey learns all this while hiding in Mr. Battis’ closet and eavesdropping, casually smoking a cigarette. Sidenote: I don’t think that’s how sleuthing works. If some girl is smoking a cigarette in the closet two feet to my left, I’m probably going to know. Still, Detective Smoke Stacks does manage to learn the name Black Rose, who handles all the “hospitality girls.”

Not Audrey’s finest episode. She begins it naked in Dale Cooper’s hotel room. Dale Cooper understandably doesn’t give into a high school girl’s seduction techniques. Oh, not because he doesn’t want to. I think we all know he wants to. But when joining the FBI, one must take an oath to uphold certain values, which apparently offer no grey area when it comes to naked high school seniors in your bed.

In the end, Audrey meets up with Black Rose at One Eye-Jacks, and wins her over by tying a cherry stem in a knot with her tongue, which funny enough is exactly how I got a job at the Observer.

Moving on. Dale Cooper and The Bookhouse Boys, who desperately need a theme song, are also at One Eyed-Jacks doing a little undercover work of their own. Two things with this little mission. 1) Dale Cooper has $10,000 of bureau money to use for gambling. Oh, OH so using department money for gambling isn’t part of your “oath.” You should contact the guy who wrote that oath and question his priorities. And 2) No, that is not a disguise. That is Big Ed in a wig. 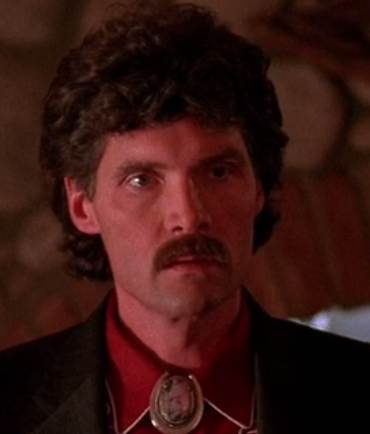 Meanwhile, after what I can only assume was hours and hours of crying, James puts together a plan to get the final Laura Palmer tape from Doctor Jacoby. They’re going to slap a blonde wig on Madison and pretend she’s Laura to draw him out of his house. This works because why not, and James and Donna sneak into Doctor Jacoby’s office. While this is happening Bobby sneaks some cocaine onto James’ motorcycle and holy shit I’m so confused because wasn’t Bobby just pretty concerned about Leo, who BTW Shelley completely whiffed on shooting in the last episode?

Yeesh. We haven’t even seen Nadine in a while. What do you think Nadine’s up to? 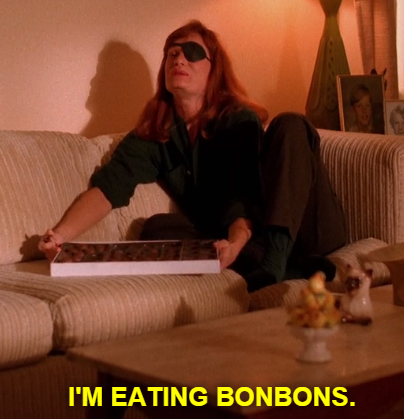 Okay so this isn’t really a question but I didn’t see any place to put it above: the Myna bird saying things like “Laura” and “Hurting me” (before getting sniped by Leo) was like, the creepiest shit this show has done so far. Creepier than BOB and much creepier than one-armed whatshisface. Um, I don’t know, thoughts?

You know that myna bird was our very first spirit animal! Or at least, one of the first? Like so many subplots in Twin Peaks, I think we just gave up on that weirdness after awhile.

Anyway, Waldo is such a creepster because he’s basically a talking tape recorder, a term you’ve already mentioned being unfamiliar with. Okay, so, backing up a bit: when I was a kid there was this movie called Home Alone, and they had a tie-in with this product called a TalkBoy that existed IRL after the film came out. The commercials for it were amazing:

So the only function of the Talkboy was too fuck with your sister’s weird, Yuppie boyfriend, but it was still 100 percent the best product that ever existed and COMPLETELY terrifying because of the implications. I used to tape myself making ghost noises and then put the Talkboy behind the TV in my basement, where I’d lock my sister for not-okay amounts of time. And this was right after she’d seen Poltergeist, so I should basically be in jail right now.

There’s just something very creepy about that mediated voice, you know? Like hearing an old song on a scratchy record player slowed down to half speed, or one of those freaky “number stations. You hear it and you’re like “Something horrifying is about to happen.” Waldo has that some haunting effect because he’s just playing these recorded noises through his beak, and you know he’s witnessed something bad, but he can’t tell you what, because he’s a bird and birds can’t talk. Not even in David Lynch shows. So he’s like George’s briefcase in that Seinfeld episode, which is another thing you are probably too young to know about.

What in the world is wrong with my dear, sweet Lucy? Is she sick? Pregnant??

I don’t know! It’s one of the show’s greatest mysteries! Maybe she has a stomach bug or maybe there’s a baby in there, or maybe she’s just a crazy lady like Nadine! WOMEN, am I right?

Is it ever really explained how Laura Palmer managed to be this cocaine-snorting, men-seducing, apparently crazy person with crazy secrets and basically everyone in Twin Peaks still thought of her as the quintessential Homecoming Queen good girl?

I do not know what the Homecoming Queen was like where you went to high school last semester, but mine definitely sold me blunts sprinkled with Adderall dust when I’d see her at raves (which were big, terrible parties filled with foam and pre-Furry furries), so none of this reads as “off” to me. Isn’t it always the sweet girl who has the terrible secret? Isn’t the craziest, meanest girl always the most popular? The biggest logic problem I have with Laura is why she’d hang out with drips like James and Donna. That’s the only part of personality that doesn’t add up for me…where were the rest of the bitchy girls at that high school that should have been in Laura’s clique? She needed to go all the way over to the bad side of town just to find a girl who she could party with, and Ronette Polowski wasn’t any kind of Heather either, if you know what I mean.

I thin the secret to Laura’s success is that she seems to be the one blond in all the Pacific Northwest. She’s a pretty big novelty over there.

Now, after the penultimate episode of season one, is probably a good a time as any to ask this: Am I just straight up wrong about anything?

Yeah, her name is Aubergine, not Audrey.

Bonus: What do YOU think The Bookhouse Boys’ theme song should be, and why?

So imagine this with some awesome Saturday morning cartoon graphics and a happy hardcore bass! 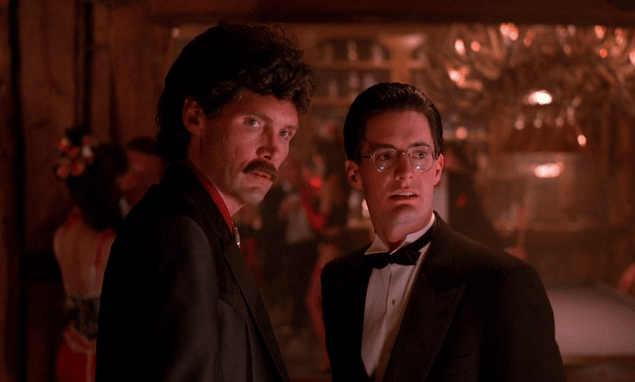