The Def Jam records founder stood in the blowing snow outside City Hall next to leading rap music figures like Common and Immortal Technique, and beside leaders from singer Harry Belafonte’s Gathering for Justice group and with Eric Garner Jr., son of the late Eric Garner. Mr. Simmons said he spoke personally with Mayor Bill de Blasio and Mr. Cuomo on the phone and that the latter had promised him that local district attorneys like Staten Island’s Daniel Donovan will no longer handle cases like NYPD Officer Daniel Pantaleo’s killing of the elder Garner, a black civilian.

“The governor said, and obviously he’s going to meet with the group as well and we’re going to hold him to it, that he would issue an executive order that would create a special prosecutor that would be outside of the police force for these kind of cases going forward,” said Mr. Simmons

Mr. Simmons said he and other members of the coalition—calling themselves the Justice League NYC—had also met with Attorney General Eric Schneiderman to call upon him to bring an indictment against Mr. Pantaleo. They presented a 10-point list of demands, which included calls for Mr. Pantaleo’s firing, an end to “broken windows” policing, extensive police retraining and the immediate passage of the controversial Right to Know Act, which would require officers to inform citizens of their right to refuse a police search without a warrant.

Mr. Simmons, however, seemed most sure about Mr. Cuomo fulfilling his purported promise, and the famed music icon and activist said he had known and worked with the governor for decades. The pair both hail from Queens and previously worked together on reforms to the state’s harsh Rockefeller Drug Laws.

“I’m very excited about what the governor said, and I want to hold him to it. We grew up together, I have a lot of faith in him, he’s marched with us on many occasions, and if he said it, that he’s going to issue the executive order, we can certainly count on. But we will make sure it happens as well.”

Common—born Lonnie Rashid Lynn—argued that entertainment figures can play an important part in helping the movement for police reform and accountability.

“We are part of the people, we are reflections of the people, and we understand what the people need, and this organization, we’re going to do whatever it takes to get justice,” said Mr. Lynn.

Joining the group later was Brooklyn Councilman Jumaane Williams, who insisted that the high-power powwow had “nothing to do with being anti-police.” Instead, he argued that police are forced to to take on responsibilities that should be spread across multiple social agencies to deal with issues arising from systemic racism and white privilege.

“In 20 years, when our kids say, ‘Why are we living in such a good world,’ let us say ‘In 2014, the country woke up. The country decided we had to have an honest discussion about white privilege, about racial injustice in this country,'” he said.

At roughly the same time, several dozen demonstrators from the advocacy group Picture the Homeless rallied outside the Vanderbilt Avenue headquarters of the Manhattan Institute, a conservative think tank, in protest against the Staten Island grand jury’s decision not to indict Mr. Pantaleo in the Garner homicide, and against broken windows policing.

“We’re here because that theory was promoted inside that building, the Manhattan Institute,” Picture the Homeless board member William Burnett announced through a megaphone. “So now NYPD is institutionally equipped to judge whose rights merit protection and whose don’t. Combine that with the department’s militarized policing tactics, and we effectively have, instead of a civilian police force, a standing army occupying this city. As if its inhabitants were a foreign population they must intimidate and control.”

“No wonder we’ve had to endure so many Eric Garner scenarios throughout the last couple of decades,” he continued.

Chanting, “Broken windows equal broken lives” and “They say get back, we say fight back,” they spilled briefly in the street near Grand Central Station before police forced them back. They then turned and marched south on Fifth Avenue.

Updated to include comment from Mr. Lynn, Mr. Williams and Mr. Burnett. 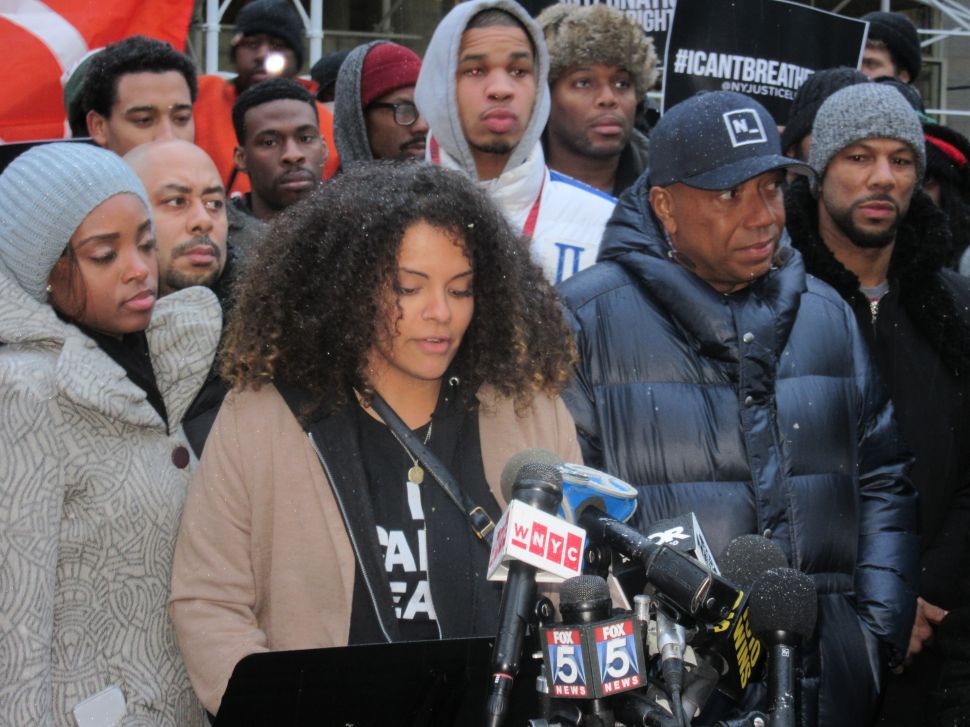