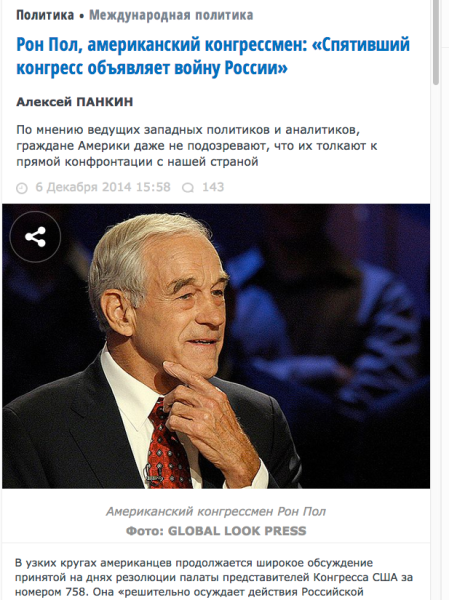 For years, the Russian media has been presenting members of the US Congress as a bunch of old, corrupt millionaires who are nothing but Russophobes and poodles on the leash held by the global corporations. Senator John McCain, for example, deploying famous phrases like “Today we all are Georgians” and “now we all are Ukrainians,” never misses the opportunity to attach the KGB label when he pronounces the word “Putin.” He has become a household name in Russia and a symbol of a Russian-American “reset” that was never meant to be. According to the Russian media, most congressmen are crazy to the point that one has to be mentally ill even to listen to them.

But there is one good egg, a positive exception. Never mind that he is a former congressman. His name is Ron Paul and he has become a rising political star in Russia. Mr. Paul became a darling of the Russians back in March when in his interview to the USA Today he declared “Crimea secedes – so what?” In arguing that “self-determination is a centerpiece of international law,” Mr. Paul seemed to hit upon language that rang true to many Russians, writing in his op-ed, “What’s the big deal?”

Nowadays, he gives interviews to the Kremlin international mouthpiece RT, he has been quoted by major Russian newspapers and TV channels. He is a representative of the progressive America.

All because of Mr. Paul’s position on Resolution 758, passed by the House on December 4, which condemns the actions of the Russian Federation toward Georgia and Ukraine starting from the year of 2008 (a policy “of aggression against neighboring countries”). The 16-page Resolution that “nobody read” passed the House with a vote of 411 to 10, said Ron Paul in his interview with RT. The only people who read it were the 10 who voted “no.”

Resolution 758 was introduced by Rep. Adam Kinzinger (R-Ill), according to the most influential Russian TV program Vesti Nedeli (News of the Week). The program describes Mr. Kinzinger as “not educated in international affairs, a young American former military pilot that had distinguished himself in Iraq”, who “loaded the Resolution with so many factual mistakes that if he would had operated his plane with so many mistakes he would have crashed it into the ground or been shot down.” 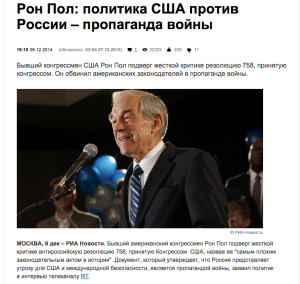 Another celebratory article, this one from ria.ru, is headlined “Ron Paul: US policy against Russia – the propaganda war.” (screencap ria.ru)

In his new article, entitled “House Chooses New Cold War with Russia,” Ron Paul lashes out at Resolution 758, calling it “one of the worst pieces of legislation I can remember,” and “so full of war propaganda that it rivals the rhetoric from the chilliest era of the Cold War.” No wonder Ron Paul enjoys enthusiastic support in Russia.

According to Mr. Paul, Resolution 758 condemns Russia “for doing exactly what the US government has been doing for years” around the world. Mr. Paul cites many examples of Russian tactics that he considers no different from American maneuvers, like imposing economic sanctions (on Ukraine), selling weapons (to the Assad government in Syria), invading (Ukraine, though according to Mr. Paul, the US government has offered no proof of invasion), attempts to “illicitly acquire information” (about the US government), using (Russian) state-funded media with the goal to “distort public opinion” (in the West), for provision of weapons (to the Russian-speaking eastern part of Ukraine), etc.

Resolution 758 could even pave the way for a potential war with Russia, similar to the way Congressional resolutions set the stage in Iraq, Ron Paul warns the world. At the same time he hopes that it is nothing more than public relations and grandstanding but still concludes it’s a “very dangerous action because it reflects the general opinion.”

Last month, Observer columnist Lincoln Mitchell wondered whether Rand Paul’s presidential aspirations would be damaged by his outspoken father’s popularity in Russia. Mr. Mitchell wrote, “It is not altogether insignificant that Ron Paul continues to be active politically, in part as a frequent guest discussing a broad range of policy questions on the network RT (formerly Russia Today). The cable television network is widely seen as the major English language propaganda arm of the Kremlin.” He also quoted Columbia University political science professor Kimberly Marten describing RT as “the mouthpiece of the Putin regime… but with much better graphics and production values, and more global coverage.” Professor Marten said American politicians should be wary that their “words will likely be distorted and mistranslated in the Russian version of the broadcast.”

That may be, but with the senior Ron Paul, no such distortion or mistranslation is necessary. In Russia, people love to hear Ron Paul saying that America will go broke supporting the sanctions, just as the Soviet Union went broke fighting a Cold War that it could not afford. Russians lap it up when the former congressman and presidential candidate states that the sanctions will backfire on the Europeans, as well as the Americans.

“Of course we [the US government] now are penalizing the people in Russia but it will affect US economy as well,” says Ron Paul.

And the Russians hope he is right. 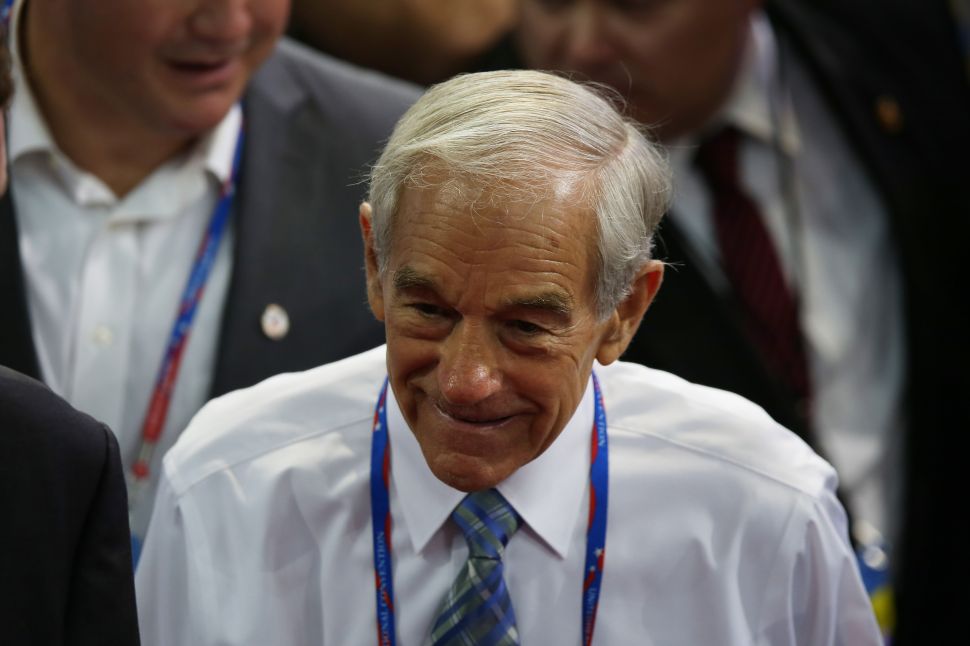