If you talk to a Russian about the international political situation, sooner or later you will be informed that there is a country in North America that you’ve never heard of. Its name is ‘Pindosia,’ ‘Pindostan’ or, more officially, ‘United States of Pindostan,’ and you will be told that one part of it, called Alaska, used to belong to Russia. Part of the word—‘stan’—stands for underdeveloped state, as in ‘ Pakistan,’ ‘Kazakhstan,’ or ‘Uzbekistan.’ The citizens of this country in plural form are called ‘pindoses,’ in singular—‘pindos.’

There are more than 316 million ‘pindoses’ in ‘Pindostan.’

Today, this country has a black President, and the Russians have a nickname for him too. He is called Maximka—after a character from a popular Soviet movie, made in 1952, which told the story of a black boy saved by the Russian sailors from the cruelty of the vicious American slave-traders who were terribly abusing him and calling him just that—“Boy.” In the film, the saved boy was fed well by the Russian crew, given the name Maximka, and became one of their own in the end.

But by the modern-day Russian legend, Maximka, unfortunately, has grown up into an ungrateful Russophobe.

One can assume that the reader by now has a clue what this country is.

The word ‘pindos’ in Russian is highly offensive, and defines a helpless creature that is a product of a very bad educational system, one who can survive in this world only with the help of various gadgets. The origin of the word is unknown, and the philologists are fighting to establish it. The most popular explanation states that this word was invented by Russian peacekeepers in Serbia with the purpose of describing a NATO soldier, who was seen by them as a strange, clumsy figure with his 90 lbs. of bulletproof vest, weapons, radios, flashlights and so on.

From afar, he looked very strange to the Russian eye—like a penguin.

The Russians have had their favorite, most-hated pindoses. One of them, the constant laughingstock in the media, used to be the US Ambassador to Moscow, Michael McFaul. He was a huge fan of Twitter and if judged by the number of his tweets, spent more time on his gadget than actually doing his job. After more than two years of service there, upon his departure, he received only two words in Russian—via Twitter—from the Russian Ministry for Foreign Affairs: “Goodbye Mikhail.”

Today his place has been taken by the spokesperson for the US Department of State, Jen Psaki. She has an anti-fan club of haters who consider her not to be very bright—they even invented their own anti-IQ unit called 1 Psaki. One who has 3 Psakis has a brain of a clam. The term ‘psaking’ in Russian political newspeak means to know nothing about the subject while saying something banal and politically correct. She is so popular that when she injured her foot and came in front of the cameras with the cast on, all major Russian TV channels and newspapers reported the event.

Another hated ‘pindos’ is Senator John McCain (R-Ariz.), famous in Russia for his periodic tweets to ‘Dear Vlad.’ In 2011, for example, Mr. McCain tweeted Putin, “Dear Vlad, The #ArabSpring is coming to a neighborhood near you.” Usually reserved and purposefully polite while talking about his ‘partners from over the Big Pool’ (Big Pool being the Atlantic Ocean ), this time Mr. Putin shot back, saying that Mr. McCain “has a lot of blood of peaceful civilians on his hands. He must relish and can’t live without the disgusting, repulsive scenes of the killing of Gadhafi.” “Mr. McCain was captured in Vietnam and they kept him not just in prison, but in a pit for several years,” Mr. Putin added. “Anyone [in his place] would have had his roof moved over.” The last three words in Russian slang mean “suddenly to become insane.”

Today, according to the respected Moscow ‘Levada Center,’ which measures political sentiment in Russian society, 74% of Russians have negative feelings towards the USA. It hasn’t always been like this; in the 1990s, 80% had positive attitude toward America.

Currently, 76% of Russians hate Obama personally and only a meager 2% like him. In 2009 only 12% of Russians had extremely negative feelings towards Obama.

These are the maximum peaks of anti-American feelings in Russia in years but the sociologists believe they could go even higher in the near future.

Anti-American sentiment has been growing slowly in Russia since the war in former Yugoslavia. But the sharp recent increase happened as a result of the US-led sanctions that were imposed on Russia after the ‘Russian annexation of Crimea.’ For example, just last week Visa and MasterCard completely stopped their operations in Crimea, leaving more than 2 million people there without access to their money. 75% of Russians do not believe that their country is responsible for the events in Ukraine. On the contrary, they blame the US.

When the sanctions began, many Russian businesses responded by putting up ‘Obama Is Sanctioned Here’ signs on their doors and windows.

However today they went much farther.

The owners of the Moscow supermarket “Electronics on Presnya” are using American flag doormats so the customers could wipe their dirty feet off, according to the British tabloid Daily Mail. “Customers have been filmed wiping their feet on the fabled stars and stripes as they enter and exit stores across Moscow, as struggling retailers take a hopeless swipe at their Cold War adversaries,” reports the newspaper. According to the Moskovky Komsomolets Moscow newspaper, the nation’s business owners decided to put the US flag under the Russians’ feet because of the strained relations between the two countries. “New doormats with the American flag were put at every exit so that America would not think that she is allowed to everything,” they say.  “From one perspective, of course it is a flag, but from the other, because of this entire situation in the world, regular folks are suffering. All the electronics we import, mostly from China and buy for dollars. We have to work directly so the US would have no chance to manipulate the prices.” (The Russian ruble lost about 50% of its value because of the economic sanctions by the western countries and a fall in the oil price.)

By the words of the shopping center’s attorney Konstantin Trapaidze, the doormats with the American flag do not break any Russian law. “It is very probable that the doormats have a decorative character. Yes, people are walking on them but nobody prohibited this. They produce not only doormats with the flag on them but also furniture upholstery. The breaking of the law would be when someone would start burning such a doormat or real flag demonstratively, or tear it up.”

Major Russian TV channel Vesti eagerly reported that fact. They also added that some Moscow stores were selling the toilet paper with American flag imprinted on it. The pricetag was $1 per roll.

A number of Russian politicians have been working very hard to keep the flames of rage burning. Last week, the Speaker of the Russian Parliament, Sergei Naryshkin, raised the issue of starting an international investigation of the Hiroshima and Nagasaki bombings by the US in 1945, as a ‘crime against humanity’ has no time limit. He wanted nothing less than a new Nuremberg trial with the US at the criminal’s bench.

Vladimir Putin, from his side, during his most recent press conference, used the occasion to show his negative attitude toward one of America ’s most popular products. Answering a question about Russian drink Kvass, he said, “I don’t know how harmful Coca-Cola is, but a lot of specialists say that it is, especially for children. I don’t want to offend Coca-Cola, but we have our own national non-alcoholic beverages, and we shall help them to win our stores’ shelves.”

He could have chosen another brand as an example of an unhealthy soda, since there is no shortage of different drinks in Russia’s stores. But to no one’s surprise, the Russian President chose for his attack the very symbol of Pindostan. 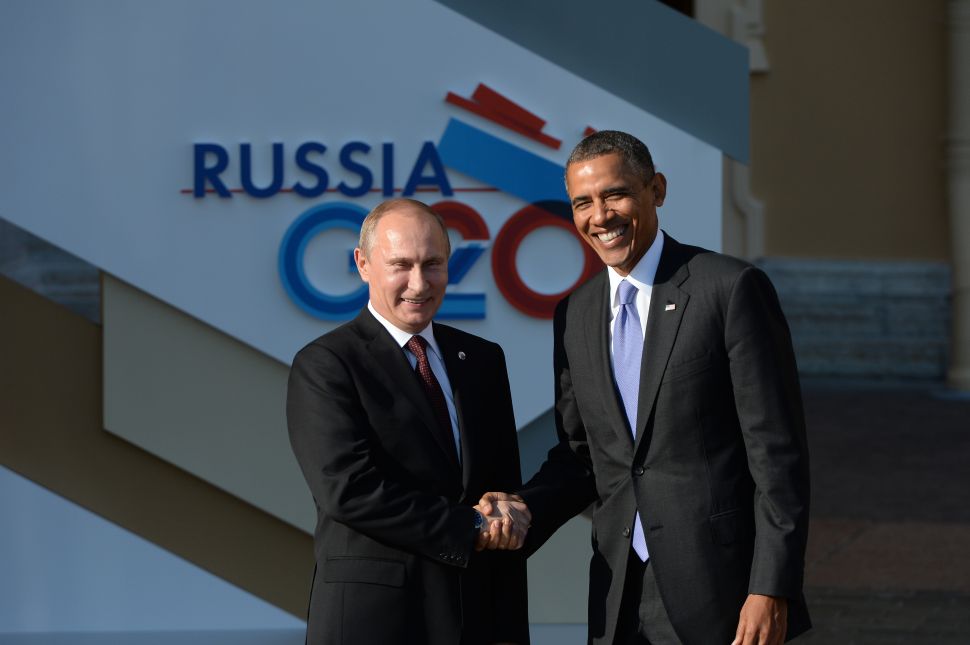