Ryan McNamara’s ME3M 4: A Story Ballet About the Internet is stealing the show at Art Basel Miami Beach this year. The updated version of his Performa 13 work has been adapted to fit a new venue, the Miami Grand Theater at the Castle Beach Resort, and a whole new audience, the voracious fair-going, party hopping crowd that makes up Art Basel Miami Beach each year. Playing for a limited run through the week, the result is a wild late night ballet that takes the audience on a tour—you’re literally hoisted around in your seat—of the Internet’s vast depths and social platforms via a rotating set of ballet performances.

Audience members are seated in cushioned office chairs on the main floor of the theater to start. The soundtrack of cut and melded house music, hip hop tracks, trance, and pop begins as several dancers take the stage, moving in tune with the fast-changing sequence of music. Immersive theater performances are not a new phenomenon, and neither is direct engagement with the audience, but—am I moving? Yup! Instead of bringing the performers to you, you’re brought to them by handlers that pick you up in your chair in custom dollies and wheel you through the theater—sometimes to other rooms entirely—to different performers all dancing to the beat of the same drum—albeit one, golden haired woman who moves on top of an elevated stage, wearing headphones that match those offered to viewers so they can listen in to her soundtrack.

And just as soon as you’ve settled in to watch a new dance you’re picked up again and hauled away to another. Mr. McNamara’s dance blitz mimics in real life the online sensation of falling into down the YouTube rabbit hole, often not digesting anything long enough to see it through to the end, and even stumbling into the dark and disturbing where least expected. ME3M does such a good job at creating the social set up of Internet overload through dance and music that viewers have a hard time deciding if they should even be watching the performer right in front of them, and many spend the hour craning their necks around trying to get a glimpse at what they might be missing out on just across the room.

Something to know about the Miami Grand, and what helps make this performance so memorable, is that it was once the Playboy Theater. It has all the trappings of a former den of sin. Bad carpeting, twirling crystal chandeliers, mirrored walls in abundance, odd fitting decorative motifs like stained glass ceiling panels, tile mosaic columns, and panoramic Italian hillsides rendered through aged frescoes. And don’t forget the mood lighting: the halls are dripping with the sensual glow of red lamps.

Then, in what feels like the three-quarter mark of the show, the music stops. Viewers are rolled back out on to the main floor from the now quiet side rooms, with the performers following and occupying the balconies and entrance ramps. The music in the main hall is on now, it speeds up, and then it’s just over. Internet connection lost. 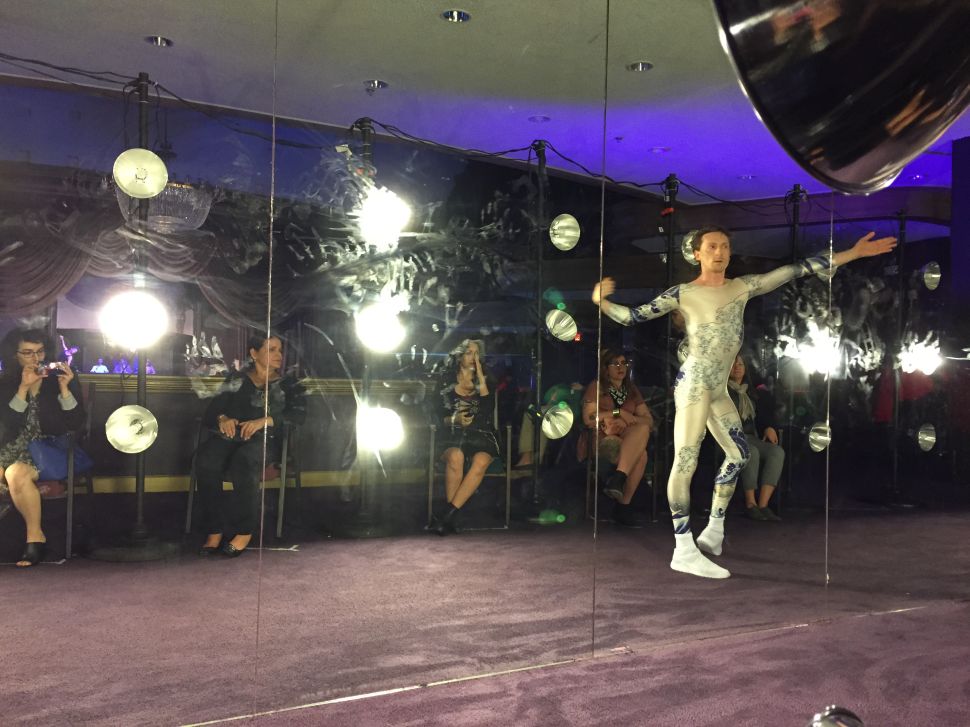