The Observer has exclusively learned that in the wake of Rolling Stone‘s blockbuster story about campus rape at the University of Virginia and the subsequent fire that that story’s reporting has come under, the magazine’s deputy managing editor offered to resign.

According to a source inside Rolling Stone, who insisted on anonymity to preserve an ongoing relationship with the magazine, Sean Woods presented a letter of resignation to founder and publisher Jann S. Wenner. Mr Wenner, said to be furious at the unraveling of what had originally looked like a massive scoop, declined to accept the resignation.

According to the first source, “Sean handles all the non-music features, including anything like Matt Taibbi. This happened in part because Will is stretched way too thin. You have to understand, he’s not only the editor of Rolling Stone, but of Men’s Journal, too.”

Mr. Dana’s title lists him as Editorial Director of Men’s Journal, but according to the source, he’s as hands on there as he is at Rolling Stone.

According to the source, Rolling Stone is right now planning to assemble a “re-reporting project” akin to the one the New York Times put together in the wake of the Jayson Blair fabulism scandal that will head to UVa both to sort through the errors of the story and to tell readers what actually happened.

The source attributes at least part of the explosion of the story not to the revelations about inconsistencies in Jackie’s story, but to the way Rolling Stone responded, or failed to respond.

“Erdely was terrible in the podcast,” said the source, referring to a how-I-got-the-story interview that the story’s author Sabrina Rubin Erdely gave to Slate. “Hanna Rosin is like a dog with a bone and you can hear her disbelief as Erdely explained her methods. Then when people started asking around, they failed to get outfront of this. Will has this WASPy sense of entitlement and has this sense that Rolling Stone is above it all. By Wednesday, it had blown up and by Thursday Will had put out this real mealy-mouthed statement, and even that statement had to be re-written.”

What about the fact-checking?

The source knows Rolling Stone Senior Editor/Head Factchecker Coco McPherson well and claims that she is a “stickler who errs on the side of caution,” a claim backed up by Mr. Taibbi, who remarked that the process is so intense “it usually takes longer to fact-check a Rolling Stone feature than it does to write it. Each review is like an IRS audit.”

The Observer raised an idea that has been mentioned in some corners of the press—that Rolling Stone was credulous about such an intense story because from factcheckers to editors to writers they are predisposed to believe the worst about fraternity brothers at an elite university. Indeed, Ms. McPherson initially defended the story and its methods, taking to Twitter to point to an example in which other news organizations did not identify or interview alleged campus rapists.

The source wasn’t buying that “predisposition.”

“UVA does have a problem. That’s legit. The problem is she (meaning Ms. Erdely not McPherson) found a story that was embellished. It didn’t hold up.”

The Observer asked the source why Mr. Wenner declined to accept Mr. Woods’ resignation or force out Mr. Dana, having in the past shown little reluctance to fire people.

“Jann at this point has fired more people than most owners will ever hire. Will has lasted longer than any editor in the history of Rolling Stone and Jann puts a lot of currency in the people who are there and doesn’t want to go through the hassle of finding great people. And he also believes that Will is the best editor in New York. And he might be right.”

Emails to Mr. Dana and Mr. Woods sent just before press have yet to be returned; if either has comment to add this story will be updated. 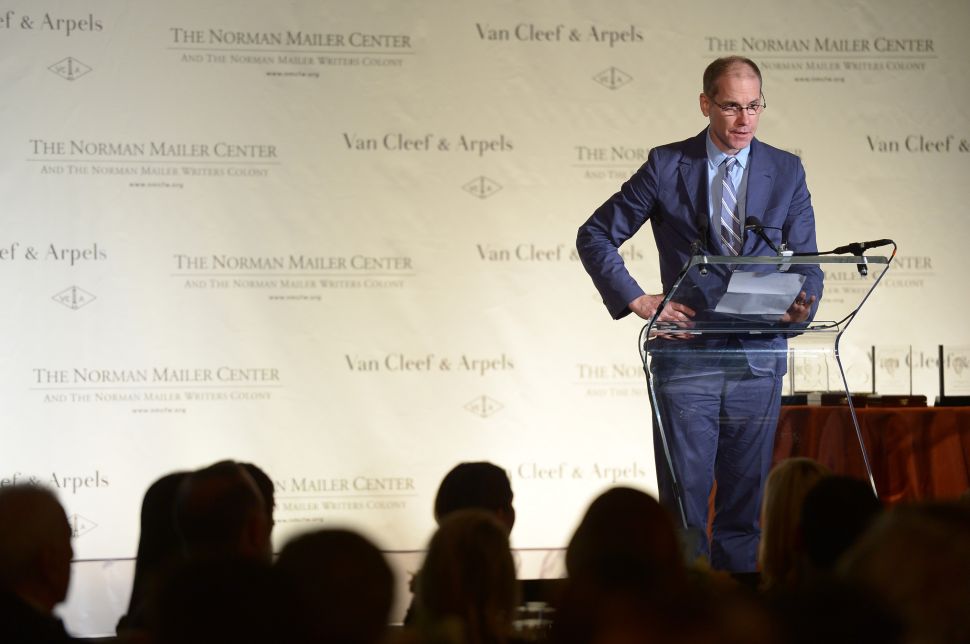