Chess, one of the world’s oldest games, reflects the times. Though the rules have not changed in 500 years, how the game is played has been profoundly affected by technology.

The use of chess computers has helped uncover new sequences of moves, particularly in the opening phase of games, and has made players better prepared and more knowledgeable than their predecessors.

The Internet has made it possible to find opponents day and night, opening up opportunities for players who might otherwise have never developed their interest or abilities. The current world champion, Magnus Carlsen, who is from Norway, is a prime example. Norway had almost no tradition of great players before Mr. Carlsen, but he honed his skills playing thousands of games over the Internet.

Technology has also accelerated how quickly players mature. There has been an explosion of prodigies in the last 20 years. Mr. Carlsen, now 24, became a grandmaster, the highest rank, at 13, and Samuel Sevian, a Massachusetts boy, who will be 14 on Dec. 26, became a grandmaster last month — the youngest ever American grandmaster and the sixth youngest in history (trailing Carlsen by exactly six months).

The best games of the last 20 years also reflect the times. The following is a list of 10 of the best and most interesting ones. Not surprisingly, Garry Kasparov, the former world champion, who pioneered the use of computers and the Internet in chess shows up in three of them.

Deep Blue: Chess-playing super computer developed by I.B.M., capable of calculating up to 200 million chess positions per second (though, admittedly, most of them of limited value)

The game was historic as it was the last game in the series and decided the match in the machine’s favor. The game itself was not a well-played game by Kasparov. In fact, he made a rudimentary mistake in the opening — though it may have been intentional as he did not yet fully understand the computer’s capabilities. Deep Blue responded brilliantly. After only 19 moves, Kasparov threw in the towel and resigned. It was the first time that a human world champion had lost a regulation match to a computer. Chess, and the field of artificial intelligence, would never be the same.

Veselin Topalov: Bulgarian grandmaster ranked in the top five in the world, who would eventually become No. 1 after Kasparov’s retirement, as well as a world champion

This is Kasparov’s so-called Immortal Game (named after the original game called the Immortal in London in 1851 between Adolph Anderssen and Lionel Kieseritsky). It was played during an annual super tournament in the Netherlands. At Move 24, Kasparov started a startling combination by sacrificing a rook. A move later, he offered the sacrifice of his other rook (which Topalov could not take). In total, the combination stretched 13 moves, with an incredible concluding move of sacrificing the remaining rook again, which Kasparov had to foresee ahead of time. Topalov resigned a few moves later.

Really the first great chess Internet event. The match was hosted on MSN Gaming Zone. The game turned into an incredibly complex four-month, 62-move marathon, which Kasparov eventually won, but not without a supreme effort. Afterward, he said that he had spent more time analyzing this game than any other game.

Anand: India’s first grandmaster, undisputed world champion from 2007 to 2013 (until defeated by Carlsen), former No. 1, and the player whose popularity and success single-handedly revived the interest in chess in the country where the game was created

The match – a best-of-12 games for the world championship — was tied. If this game was drawn, it would go to a series of rapid games, in which Anand has always been noted for his prowess (early in his career, he won the world rapid championship). Topalov, perhaps unwilling to take a risk in the playoff, decided to press ahead in a position in which chances were equal. As Topalov directed his pieces toward the queenside, Anand did not miss his chance and forced open the king side with two rapid pawn advances. The king hunt was on. Though Topalov squirmed and squirmed, Anand was unerring, finding deadly move after deadly move. Topalov soon had to give up his queen to avoid mate. The resulting endgame was a cakewalk for Anand and Topalov eventually resigned, leaving Anand in possession of the title.

Kramnik: Russian grandmaster, the man who dethroned Kasparov in 2000 to take the world championship, former No. 1 player in the world

Leko: Hungarian grandmaster, the first player to become a grandmaster before the age of 15 (in 1994, when he was 14), former top five in the world

In 2004, Leko played Kramnik for the world championship in a best-of-14 match. Leko, a rock-solid player, was at the top of his game and he took the lead going into the last game. Kramnik had to win to tie the match, in which case he would retain the title. (It was the last time that the old rule that let champions retain the title in case of a tie was ever used. Now, there is a playoff system.) At least Kramnik had White.

He opened with 1 e4 and Leko chose the Caro-Kann Defense, which can be extremely hard to crack. Leko strove for an early exchange of queens, believing that if the queens were gone, his chances of losing would be reduced. Kramnik, realizing that the exchange would allow him to tighten the strategic pressure on Leko’s position, did not avoid the trade. Gradually, he built up his advantage. Though the game moved toward the endgame, with fewer and fewer pieces, Kramnik’s advantage actually increased. In the end, he marched his king up the board, and though he only had a rook and a knight left, he wove a mating net around Leko’s king. Facing checkmate, Leko resigned on Move 41 and Kramnik kept his title. It was, given the pressure and circumstances, one of the greatest strategic victories in history.

Levon Aronian: Armenian grandmaster, long the No. 2 player in the world, though he has recently slipped to No. 5; for several years probably the best player of the middle game in the world

The tournament in the Netherlands, held in a small sea-side town, has been one of the world’s top competitions for decades. Though Anand was the reigning world champion, his play had deteriorated in recent years. Aronian was one of his likeliest future challengers. The opening was in one of the most currently popular openings. Aronian played a very double-edged move, and Anand responded with an even more complicated idea. He followed it up in extraordinary fashion with not one, but two piece sacrifices. By the time Aronian realized what was happening, the trap had been sprung. He resigned after only 23 moves, as he would have had to give up his queen and a rook to stop mate. One of Anand’s greatest victories.

Carlsen: Norwegian grandmaster, current world champion and No. 1-ranked player in the world, one of the greatest prodigies of all time

Ernst: Dutch grandmaster who will probably be best remembered after his career is over for this game

This tournament, and this game, announced to the world that Carlsen was something special and possibly going to be world champion. He was 13 and in the C section of the tournament – reserved for up-and-coming players. Though he was the youngest participant, he ran away from the field, scoring 12.5 out of 13 points. This game simply stunned observers and fans around the world. Ernst chose the rock-solid Caro-Kann Defense and seemed to be doing fine. Then on Move 18, Carlsen, without warning, sacrificed a knight. Ernst did not have to take it and, in retrospect, he should not have. The result was a series of explosions and sacrifices around his king. First a bishop, then a rook. Carlsen concluded the attack with a beautiful epaulette mate on Move 29. Ironically, Carlsen soon dispensed with this take-no-prisoners style and evolved into what he is today – perhaps the best strategic end-game player in the game’s history.

Morozevich, a Russian grandmaster, has been ranked as high as No. 2 in the world; he is one of the most creative players of the last 20 years and, when he has been on, one of the most dangerous

Vachier-Lagrave: a French grandmaster, who has been ranked in the top 10; had the misfortune to be born in 1990, so he is known as only the third best-player to be born that year, behind Sergey Karjakin of Russia (the youngest grandmaster in history at 12 years, 7 months) and Carlsen, the world champion

Morozevich started a fierce and brilliant attack, sacrificing a knight to rip open the center and destroy the pawns protecting Vachier-Lagrave’s king. In an extraordinarily complicated position, Vachier-Lagrave kept finding ways to create problems for Morozevich and, a couple of times, he missed the knockout blow. Soon, Vachier-Lagrave’s king found shelter on the king side, but his rook was trapped in front of it and could be taken at any time by one of Morozevich’s pawns. Somehow, that time never came. Eventually, Vachier-Lagrave was able to survive the threats and untangle his pieces, leading to a winning endgame. Morozevich, facing mate, resigned on Move 76. It was a titanic struggle, with errors on both sides, but was also chess at its most entertaining.

On Move 20, Nakamura, playing Black, seemed to walk into an attack by a rook on his queen. Only he had seen further. Instead of moving his queen away from the attack, he sacrificed it for a pawn, drawing Krasenkow’s king out into the open. Krasenkow resigned seven moves later, as he could not stop mate.

It was the cap to a remarkable two days for Nakamura. The day before, playing White, his own king had been brought out into the open by a sacrificial attack by a Spanish international master named Jordi Fluvia Poyatos. Nakamura’s king wound up on h7, almost surrounded by Poyatos’s queen, rook and bishop. But, instead of being in danger, Nakamura’s king was perfectly safe and Poyatos resigned, his pieces a victim of a “checkmate” by Nakamura’s king. Nakamura would go on to win the tournament.

Giri : Dutch grandmaster, 20 years old and already ranked in the top 10 in the world

Yet another fantastic game from the annual tournament in the Netherlands. It is a sign of how well prepared players are these days that Aronian said after the game that he had cooked up the exchange sacrifice he played on Move 13 in this somewhat obscure sideline of the Queen’s Gambit Declined at home. Though Giri put up quite a fight, and actually played relatively well, he stood almost no chance. The game was a tour-de-force example of how computers have reshaped people’s understanding of the game. Aronian finished with a beautiful knight sacrifice to clear space for his queen and Giri, facing mate, resigned.

Dylan Loeb McClain covered chess and other subjects for the New York Times until earlier this year. He is a master level player (FIDE rating of 2320) and lives in France. 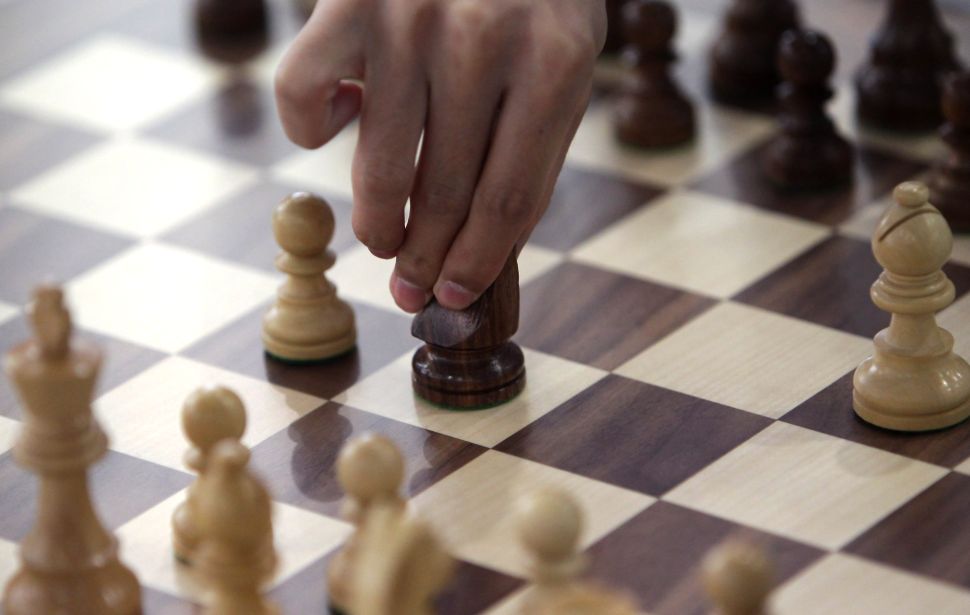