With only a fortnight remaining until New York’s social lions hibernate before the New Year, a binge of opulent soirées took place.

“It’s every night!” Caroline Villency cried out last Wednesday at ACRIA’s holiday dinner at Skylight Chelsea. “Last night we were at this beautiful townhouse party,” she grinned, taking a sip of Domaine de la Tourmaline Muscadet.

A thunderstorm of flashbulbs interrupted us as honorary co-chair Kim Kardashian West sashayed into the joint, mid-meal, wearing a teal bustier and rosé Champagne-hued silk skirt with golden Tom Ford sandals. Her Ulyana Sergeenko ensemble left no curve neglected. The reality TV starlet was on site to bestow Mr. Weber with his Tiffany & Co. trophy.

“Please don’t hold this against me,” Ms. Kardashian West began, recalling how she first met Mr. Weber, the legendary shutterbug, on a shoot. “But I am so afraid of dogs. There were 10 dogs in the shoot, and I was shaking the whole time. They were tiny dogs, but still … That’s where I fell in love with Bruce.”

“She actually didn’t sound like an idiot,” one guest marveled as dessert and coffee were doled out.

A theme at last week’s events was finding the perfectly crafted winter cocktail. “The martini remains the quintessential aperitif cocktail in my book,” tooted Raj Nagra, the global brand ambassador for Bombay Gins.

And throughout the week, when it came to a stiff one, the gin martini was the preferred libation. Quite a few were slurped at Graff’s holiday dinner at Hotel Americano, Michael Arenella’s annual Jazz-Era Winter Ball, and Tom Postilio and Mickey Conlon’s Christmas sing-along at The Players’ Club on Gramercy Park South.

“Stirred with vermouth and a twist,” said Allen Katz, renowned cocktail mixologist, describing his perfect, wintertime martini. He hosted a tasting at a launch for Warwick New York’s new luxury suite packages. “But I also love the idea of hot toddies and punch.”

Champagne was the drink of choice at the New York Botanical Garden’s Winter Wonderland gala in the Bronx on Friday. Booze was well deserved for those who made the trek, especially as some of the swans arriving en masse had suffered through hairy car rides.

“Our driver got lost in Queens!” Dr. Penny Grant grumbled of her lengthy journey North. “I made him shut the meter off.”

“I just got here five minutes ago,” griped Elizabeth Kurpis, who wore a gilded gown by one of the evening’s sponsors, Badgley Mischka. “It took two hours. It’s kind of crazy,” she laughed, trying to stay positive. “But the most important part of this ball is the amount of sparkles that you wear on your dress.”

Patrons strolled along the Enid A. Haupt Conservatory, taking in the 23rd annual holiday train show that traced the entire Victorian garden. Dinner had barely been served before the first sirens had taken to the dance floor.

“We made it this far,” a young attendee at our table yelled as she scurried to groove to DJ Nick Cohen’s mix of European dance classics. “I’m going to make this an extra long night!” 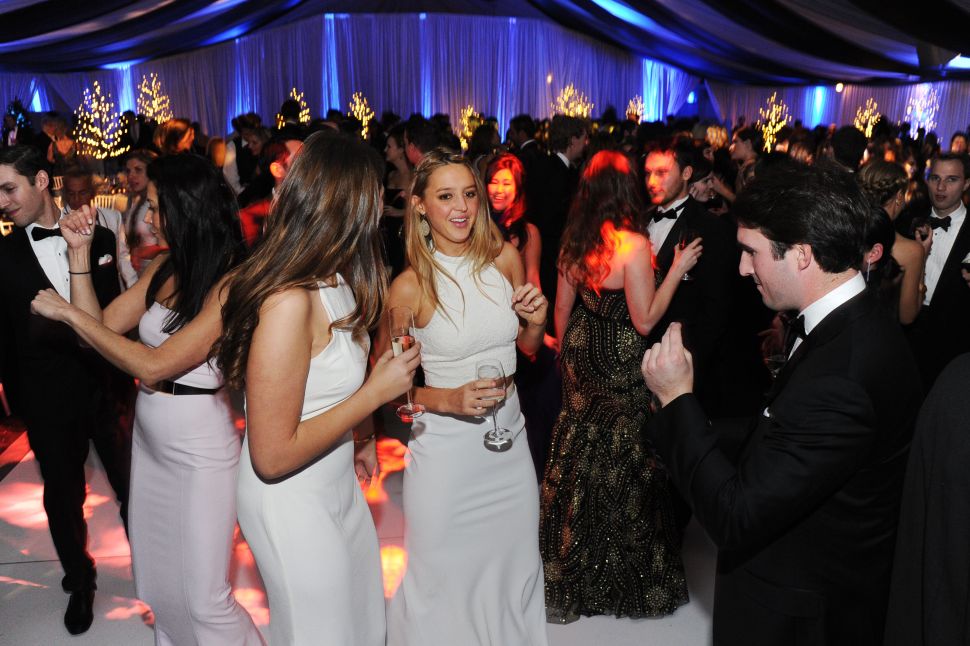