Cory Booker’s political career has in many ways been about promise. Since his introduction into political life as a Newark city councilman in 1998, the question of whether he would rise higher seems not to be answered by the word with, but when.

During the past 16 years, Booker has slowly but surely risen up the ranks from councilman to Newark mayor to U.S. Senator. PolitickerNJ took a speculative look down the road to see where Booker could wind up next in the near future, and what it would take to get there.

President: “Hail to the Chief” has been a leitmotif for many political observers of Booker even before his days as a Rhodes Scholar and including when he was mistaken for Barack Obama at the 2004 Democratic National Convention in Boston. Obama edged out Hillary Clinton for the Democratic nomination in 2008, and now Clinton, a former U.S. Senator and Secretary of State, appears to be the odds-on favorite to get the 2016 nod. But if for whatever reason a Clinton nomination does not come to pass, Booker already has a much higher national profile than many other potential Democratic candidates such as U.S. Sen. Elizabeth Warren (D-Mass.), former U.S. Sen. Jim Webb (D-Va.) and Maryland Gov. Martin O’Malley, although not more so than Vice President Joe Biden and New York Gov. Andrew Cuomo.

Vice President: While Booker has only served in the U.S. Senate since October 2013, his bipartisan efforts with U.S. Sen. Rand Paul (R-Ky.) to reform the nation’s criminal justice system and with U.S. Sen. Tim Scott (R-S.C.) to promote a federal job apprenticeship program have garnered him favorable attention. The social media-savvy Booker’s national profile remains favorable, although his leadership was called into question after the February 2014 revelation of a lack of oversight at the now-shuttered Newark Watershed Conservation and Development Corporation (NWCDC) that led to a fiscally irresponsible atmosphere and the waste of public money during Booker’s time as mayor. The question of regional balance could come into play if Clinton, based in neighboring New York, does become the Democratic nominee.

Secretary of Housing and Urban Development: Booker’s background as mayor of Newark could stand him in good stead for the HUD cabinet spot. Other urban mayors,such as Henry Cisneros and the current HUD secretary, Julian Castro, both of San Antonio, have served in the position. O’Malley, a former mayor of Baltimore, could be a source of competition for Booker.

Governor: So far, the 2017 Democratic gubernatorial derby is seen as a three-horse race between potential candidates Jersey City Mayor Steve Fulop, former U.S. Ambassador to Germany Phil Murphy and state Senate President Steve Sweeney (D-3). Yet there have been reports that Booker is considering throwing his hat into the ring. Booker would be a viable candidate, especially for those seeking another choice besides the names already out there. The 1947 New Jersey state constitution provides for a strong executive, the kind of position appealing to any politician who might one day seek the Presidency. Then again, trying to corral New Jersey’s 565 independently-minded municipalities and solve the state’s systemic property tax and infrastructure problems could crush his higher ambition into dust.

U.S. Senator – Many ambitious politicians feel that only by becoming chief executive of a state can Presidential dreams be realized. But President Barack Obama proved that a direct trip from Capitol Hill to the White House is possible. If Booker were to serve one or two full six-year terms in the Senate, building upon his burgeoning bipartisan relationships to pass meaningful legislation while creating some real foreign policy bona fides, he could ultimately move up by temporarily sitting still. 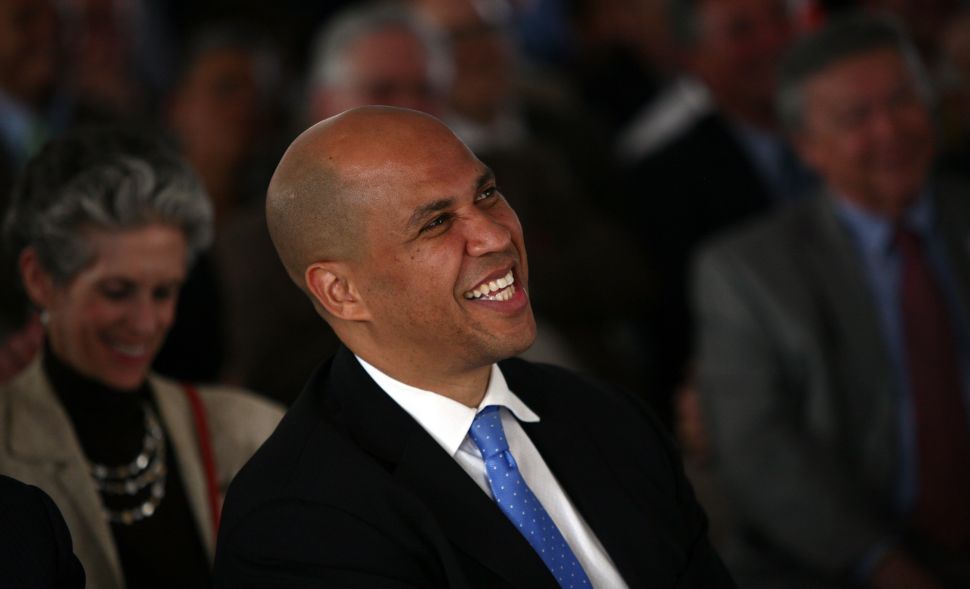