The show started like most others, with a news story and “The Word” where Colbert reminded us of all that he’s accomplished over the past nine years to “same the world,” instead of change the world. He pointed out that a single “revolution” takes you around and back to the same place you started. Then on to a regular segment, Cheating Death with Dr. Stephen T Colbert, DFA. It was during the intro to that segment that Colbert, in what appears to be an accident, murders the Grim Reaper, or “Grimmy” as Stephen calls him. It is the death of death that brings Colbert to the conclusion that he will never die. Immediately, he loses all sense of time. How long is a commercial break to a man that will go on for eternity?

What would a finale be without a proper celebrity filled sing-along? It would be garbage. Maybe celeb send offs have been done many times before but this was a pretty special combination of, “oh, that guy” and “is that…nope.” A star filled chorus singing “We’ll Meet Again” accompanied by Randy Newman on piano, included Willie Nelson, Bryan Cranston, Doris Kearns Goodwin, Big Bird, James Franco, Gloria Steinem, Patrick Stewart, Cookie Monster, Katie Couric, Michael Stipe, Charlie Rose, Kareem Abdul-Jabbar, Christiane Amanpour, Barry Manilow, Toby Keith, Andrew Sullivan, Mike Huckabee, Arianna Huffington, Alan Alda, George Lucas, Henry Kissinger and many others that smarter people would probably recognize. There were also videos of soldiers in Afghanistan, Bill Clinton, and an astronaut on the Tranquility International Space Station running on the “C.O.L.B.E.R.T.” treadmill.

The fun in-studio sing along with actors, politicians, musicians, reporters was a perfect ending. It pointed out one last time that The Colbert Report, the news, and politics are all just shows. We can disagree with Mike Huckabee on Chick-fil-A and still sing together.

Wow, where do you go from there? I don’t know where Stephen goes from there. He left the studio from the rooftop, hopping in Santa’s sleigh along with fellow immortals, Santa, a Unicorn Abraham Lincoln, and Alex Trebek (the man with all the answers).

For the past nine years The Colbert Report has been the most brilliant, well written satire of politics and the media.  It has been consistently funny and hosted by a character that seemed like it could go on forever. And Colbert will go on forever but with Alex, Abe and Santa. Congratulations Stephen on your newly found immortality and for scoring Doris Kearns Goodwin on your finale. 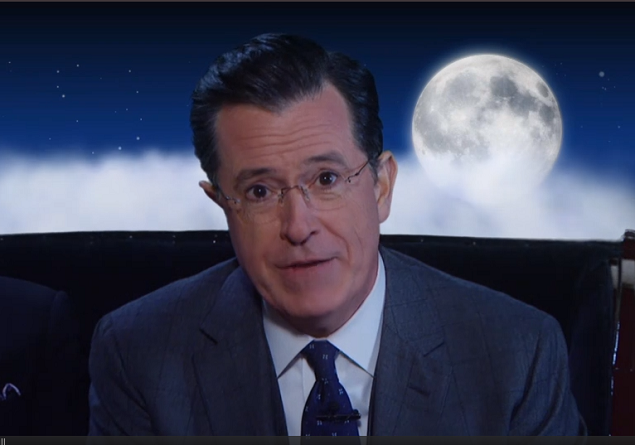 Filed Under: TV, The Colbert Report