It’s an irony literally no character on the show possesses the self-awareness required to appreciate, but here it is: It took an act of literal self-destruction for a show about the slow-motion, largely self-inflicted crushing of a human spirit to hit a serious wall.

Not that death should be off limits for The Comeback, or for any other cringe comedy. Untimely demises have been a part of the genre going back to Spinal Tap’s countless dead drummers. (“The official explanation was he choked on vomit….Well, they can’t really prove whose vomit it was.” “You can’t really dust for vomit.”) The Comeback’s own HBO antecedent, Curb Your Enthusiasm, went to the mortality well most memorably when Larry David’s dad told him he hadn’t been informed of his own mother’s funeral because “she told me not to bother you.” Both of the examples illustrate the central conceit of their respective stories: Spinal Tap chronicles a world of moronic debauchery, while Curb obsesses over the millions of minute rules that govern human interaction. So if a drummer is murdered by puke in the former, or a son misses his mom’s funeral because his dad didn’t want to impose in the latter, the pieces fit.

But the suicide that serves as a climax for “Valerie Saves the Show” is a hearse of a different color. The Comeback, after all, distinguishes itself from its cringeworthy competition by taking Valerie Cherish’s suffering seriously. As recently as last week’s amazing episode, her almost ritualistic humiliation at the hands of he-man woman-hater Pauly G. — surrounding her with pneumatically nude younger women, coaching comedy icon Seth Rogen on the best way to facefuck her — was presented as precisely the horror it was, even if Valerie’s smiling compulsion to be a team player kept it ever so slightly on the comedy side of the line. Even in this episode, she’s driven to distraction by the news that Mickey, her hair stylist and only real friend, has cancer; she only winds up in the apartment complex where the shit goes down because she was so worried her character’s emotions wouldn’t be taken seriously if her scenes at home were cut from Seeing Red that she offered up her own house to shoot them in.

All this stuff makes it much harder to get away with playing some poor drug addict’s suicide for laughs, right? Because that’s absolutely what happens. After their initial gasping shock, Valerie and hubby Mark rapidly revert to the same argument about the show (and their sleeping arrangements) they’d already been having, which basically wipes away the blood spatter instantly. The junkie’s death is only really acknowledged as a cautionary tale about a potential relapse on Pauly G.’s part — again, something the Cherish-Bermans had already been bickering about. Even the revelation that, as the unwitting slumlords of the apartment complex, the squalid conditions there are their own fault gets dismissed with a shrug. This shit should be haunting to them, an illustration of their own pettiness, and the frustrating thing is that The Comeback is the rare comedy that could carry that kind of weight. And ayyyye, it certainly doesn’t help that the whole sequence is stuffed with scenes featuring a woman whose thick accent is mined for comedy — the second time that’s happened this season, after the fast-talking Chinese reality-show crew Valerie ran into a few weeks back. In both cases, the line between Valerie’s sensitivity level and that of the show itself is one The Comeback really shouldn’t blur.

It’s a shame, because elsewhere those lines blur beautifully. When Valerie wants to hone her improv skills to go toe-to-toe with Seth Rogen, she goes to the Groundlings, the improv troupe where Lisa Kudrow got her start. When Valerie complains about the loss of “Mallory”’s house set by saying “The home stuff gives me [sic] an inner life, makes me [sic sic] more sympathetic,” she says it on a wall-mounted camera in her home, recording a behind-the-scenes documentary designed to give her an inner life and make her more sympathetic. This show is like a Russian nesting doll of meta.

And it’s also just super, super funny a lot of the time, at unexpected moments. Think of Mickey’s furious thousand-yard stare at Ron, the beleaguered line producer, when Ron tells him Seeing Red doesnt have a 26-episode order because “This isn’t The Rockford Files”: “No, it isn’t. [pause. pause. pause.]” Think of Valerie clomping down the street after Ron to suggest shooting in her house, her heels and jewelry making her sound pretty much exactly like a horse. Think of Valerie’s very, very bad improv: “Well I don’t know what kind of candy you’re making, but I’m a coal miner!” A clumsier show, a show less adept at satire and at pathos and at simply finding novel ways to be hilarious every week, could get away with having its main characters react to a corpse by worrying about getting a hotel. But that’s not the kind of show The Comeback is. Or was. 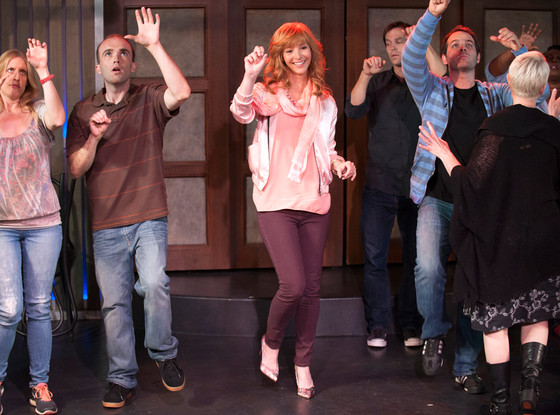