Sitcoms are boring to look at. You ever think about that? How one of only two fictional-entertainment teams on TV throws the visual game before it even reaches the playing field? You get sitcoms that are cleverly edited, sure, where the comic timing depends on the cuts; Arrested Development takes top honors here.. You get sitcoms that do convincing pastiches of other genres of TV (Community), or of the documentary/reality format (too many to list, but you’re reading about one right now). And if you look down memory lane you can find shows that had a visual tone that made them memorable and unmistakable, like the Gordon Willis golds and browns of the bar set in Cheers. But in much the same way that mainstream movie comedy appears content to leave “I dunno gang, maybe we should make the thing look good too” in the hands of the Coen Brothers, the situation comedy has pretty much tossed the visual-innovation baton to Adult Swim and called it a race.

Bless its black heart: The Comeback tries harder. “Valerie Is Taken Seriously,” last night’s killer episode (a welcome return to form after last week’s suicidal one), has the mockumentary thing down cold. It also nails not one but two genre spoofs: the grim’n’gritty, dimly lit world of HBO dramas, and the day-glo gibberish of children’s television. (As the father of a three year old, I assure you that far greater horrors than Nicky Nicky Nack Nack lurk in the kids’ section of channel guide.) It could easily have coasted. Instead, it staged its two lynchpin scenes — Valerie’s transformation into a literal monster via green screen, and her eye-opening conversation about her performance with the New York Times reporter — to look as memorable as they felt.

First, Valerie dons the familiar track suit, opens a door, and steps into a Kermit-colored void. Pretty much every viewer is familiar with how the CGI sausage gets made today, but the space is so preposterously cavernous, and Valerie’s fish-out-of- confusion so palpable, that it’s transformed into a dystopian hellscape, like THX-1138 with the tint screwed up on the monitor. The corny capering of the woman who’s replaced Pauly G. as the episode’s director, and the start-and-stop bursts of faked laughter from the “studio audience” floating in mid-air, turn the sequence into a theater of the absurd; you half expect them to delay shooting because Godot is late for his call time.

By the time Valerie goes the full morph-suit monty, squeezed by HBO into a performance that’s more Andy Serkis than Edie Falco, you hardly need Pauly G.’s thuddingly blunt character assassination to get the point. “No voice!” he yells when Valerie does her best Mallory-monster growl for her dream-sequence transformation. “You’re the monster, Val. Get it? You don’t have to do anything, because you’re the monster. Clear?” As crystal. The entire ridiculous day of shooting is nothing more or less than the full resources of the show and the network being brought to bear to make Valerie Cherish look as awful as technology will allow — a smiling serpent set adrift and left to drown in a sea of green.

But misery loves publicity, or vice versa, and that’s the note the episode ends on. After several grueling days of humiliating motion-capture work, noirish dailies that make her look positively demonic (can’t they light her scenes “just so it’s not so dark all the time?” she asks, nailing it in every way), and the revelation that HBO is turning her beloved BTS project into a warts-and-all documentary about the simultaneous nose-dives of her relationships with Pauly G. and her own husband, Val finally cracks. Storming off the set, she chases down the departing Times reporter, desperately demanding an explanation for her earlier comment that Val’s performance was “very brave.” Brave means old, ugly, fat, literally disabled—doesn’t it?

The reporter’s explanation is interesting in its own right, since it cuts to the premise of the second season: the show may be designed to humiliate her, and the off-screen shenanigans may be following suit, but it’s coaxing out a performance that’s accidentally better than Valerie ever aspired to be. “Surely you must have been aware of what you were doing,” says the reporter. LOL!

But more interesting still is how we watch Valerie process this news—through her reflection in the rolled-up window of the reporter’s rental car. It’s a slightly darker, slightly distorted version of how Valerie always sees herself, but it’s the version that may finally make her a genuine star. Et voila: A show about an actor’s self-image depicts perhaps the biggest change to that self-image yet by using an actual, literal image of her self. Is it a little obvious as a metaphor? Yeah, but so were the pigs in Animal Farm, and that worked out alright for Orwell. After all, this is an HBO show about a documentary about the making of an HBO show starring an actress making her comeback in a fictionalized version of a show within a show from the previous version of this HBO show about an actress making her comeback in a reality show about that show within a show starring a real-life sitcom actress making a comeback. (gasp, wheeze) It’s a reflection of a reflection of a reflection. Might as well own it. 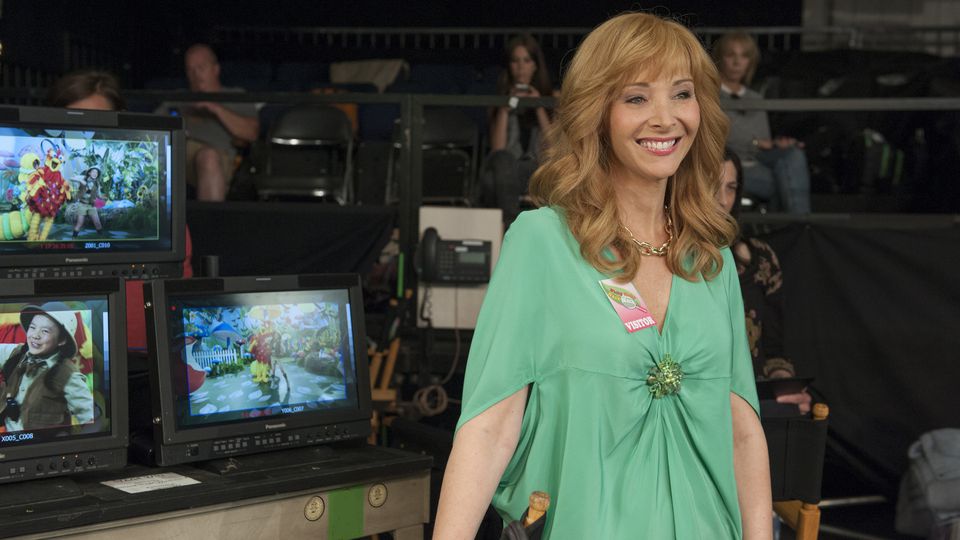