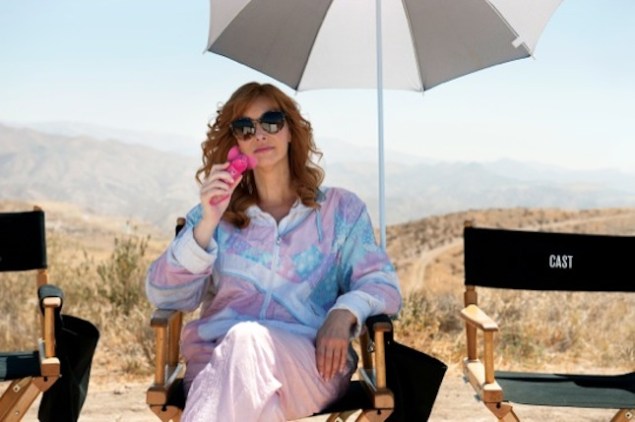 Valerie is fed up. (HBO)

“You have arrived at your destination.”—Valerie’s GPS

Valerie Cherish got a rave review in The New York Times. The show she’s on, Seeing Red? Not so much. But still! “Valerie Cherish,” “rave review,” and “New York Times” were surely three phrases not even perpetually loyal Mickey ever expected to see in the same sentence, maybe not even on the same page. Yet there they are, sticking Valerie alongside the likes of Bryan Cranston and Claire Danes in the “‘90s network TV stars kicking ass on prestige cable dramas” club. It’s the kind of success she’d dreamed of for a decade—an actual, honest-to-god comeback. The question that “Valerie Cooks in the Desert,” last night’s episode, asks: “Now what?”

In the near-term, Valerie’s professional clout has rarely been higher. The network is thrilled, with HBO mandating rewrites of the finale to give “Mallory Church” more time to shine. Pauly G. still seems ready to explode any time he sees her, but even he can’t deny how integral she is to the project, acquiescing to her demand to take a prop from her “real” sitcom past out of her “fictional” character’s set. And though it’s completely unintentional, Valerie even gets to be the one to tell her nemesis that the critics like her performance better than the show surrounding it.

Yet despite the plaudits, Valerie’s personal life is as shaky as its ever been. She and Mickey are still blowing off his cancer diagnosis with smiles and potty humor. But even more alarmingly, her husband Mark has effectively written himself off the show, staying in a rented house until Valerie has finished shooting the series. He’s got his own friends, makes his own plans, and wants nothing more to do with his old home-turned-shooting-location as long as the cameras are running. Ever since the first season, Mark’s presence in Valerie’s life has humanized her character. Mark, after all, is basically a normal guy, not a starfucker or a sugar daddy. Their marriage has lasted through the twists and turns of Valerie’s career, their affection for each other is genuine, and their sex life, as long as the cameras don’t prevent it from occurring, gives lie to Pauly G.’s portrayal of Valerie as unfuckable. If Mark’s drifting away, that’s all kinds of bad news.

So when Valerie bumps into Gigi, the sole woman in the Room and Bored writers’ room, she looms into view like the Ghost of Cherish Future. In some ways Gigi’s as successful as it gets: Her tenure on Pretty Little Liars, the biggest show on ABC Family, has earned her enough money to own four houses—for all the good that does her. “They’re all empty, because I don’t have anyone, and it’s hard to get the dogs back and forth between the houses,” she sobs non-sequitorially. True fulfillment would only have come had HBO picked up her pilot, Who Could Love You?, its Kafka-meets-Kirstie-Alley premise of a woman who wakes up one morning morbidly obese as comically on-the-nose as Pauly G.’s “junkie writer hates sitcom star” garbage, yet nowhere near as appealing to HBO. (“They picked up Girls instead,” she explains before breaking down.)

Gigi’s haunted by being single, gaining weight, getting ignored by the cast of PLL, having a toothache she doesn’t have time to treat (Sopranos “Test Dream” symbolism alert!), paying for a dogwalker who’s a “total bitch,” and of course the prestige-cable success of her former coworkers, but it seems like having to pretend she’s not bothered by any of it is what bothers her the most. “Women in this business are not allowed to cry,” she proclaims while demanding Jane cut her footage. Forever aware of the audience, Valerie informs the camera that Gigi is a “cautionary tale—that’s what happens when you make show business your whole life.” You can almost hear the lightbulb going off.

The Valerie we meet up with in the desert for a last-minute rewrite/reshoot of the finale in the episode’s final act is a different Valerie than the one we know. Sure, she’s still the trouper she’s always been, gamely lying bound and gagged in a car trunk full of snakes (fake and real) for take after take after take. (After take. After take.) But whether it’s the confidence she gained from getting the best reviews of her career or a desperate drive not to become another Gigi, she’s no longer content to grin and bear it when she’s not actually doing the work she was hired to do. She cracks wise about the reptile wrangling (“Just FYI, there are no real dragons on Game of Thrones”) and the scorching desert heat (“We’re all hot, Tyler. That salamander over there just quit.”). She defies orders by retreating to the air-conditioned base camp during the interminable wait for Pauly G. to deliver the script’s final pages, preserving not just her hair and makeup but her own sanity.

And when AD Shayna and line producer Ron first try to cajole, then order, her back to the set, Valerie lets them have it. Completely reasonably! It is, indeed, total bullshit for Ron to treat her like she went AWOL when she’d in fact spent hours baking beneath a track suit, duct tape, and rubber snakes. And it is, indeed, infuriating to be subjected to Shayna’s faux-friendly, irritatingly ingratiating requests when the woman obviously sees Valerie the way Gigi’s mean dogwalker sees her clients. It’s just amazing to see Valerie stand up for herself so spectacularly, since her few acts of self-defense are usually carefully choreographed to make her seem like an accommodating person who’s just making one tiny request. Not anymore. She’s a good actress, she’s on a show she’s probably better than, that show has blown her plans with the most important person in her life, and she’s fed the fuck up.

Her real destination, after all, is home, or at least “home”—the house Mark is renting, and apparently making a life in, while shooting continues at his and Valerie’s place. When she finally shows up, hours late, there are a few excruciating moments where it seems Mark might be out with his new (female) friend, or even that he might not be alone inside. Fortunately, Valerie’s fears (and ours) don’t pan out. She and Mark are reunited, though they’re down one broken window and one dog-devoured trailer-cooked meal. But it was a close call, and judging from the note a visibly shaken Jane holds up to the camera, Valerie knew it: “I was late. Hopefully not too late. I love you.” Apologies to (Marky) Mark 8:36, but what shall it profit a woman, if she gain Emmy buzz, and lose her own soul? 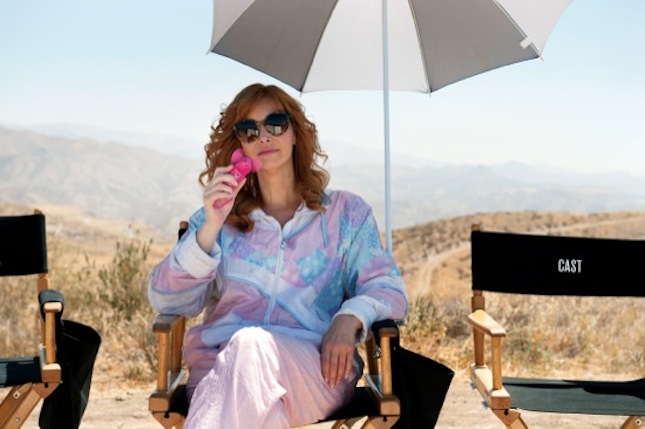