“In science, the term observer effect refers to changes that the act of observation will make on a phenomenon being observed.”—“Observer effect (physics),” Wikipedia

It took a solid minute, at one point, for my brain to catch up with The Comeback last night, for the observer to understand the observed. It wasn’t Valerie Cherish’s superstar costar Juna’s confession of hurt feelings or her other superstar costar Chris’s profession of lust that did it. It wasn’t blood flowing from her best friend Mickey’s nose or shit gushing from Valerie’s pipes. It wasn’t the red carpet or the Emmys themselves. It was the almost physically disorienting sight of Valerie Cherish, off-camera.

When Valerie flees the award ceremony in a frantic attempt to contact her estranged husband Mark about Mickey’s rapidly deteriorating health, she leaves Jane’s camera crew behind. By rights, that should be the end of the episode right there. Everything we’ve seen during both seasons of The Comeback, after all, has technically been footage shot for one of its many shows-within-a-show: I’m It, Room and Bored, The Comeback, Seeing Red, The Assassination of Valerie Cherish, The Talk, Tonight Show, even The Real Housewives of Beverly Hills. But when Valerie passes through the doors of the auditorium and out of the sight of the camera eye, there’s no Sopranos-style crash cut to black. Valerie’s still there, bathed in the warmth of film instead of the handheld coldness of digital. Suddenly, given the limitations imposed on every single shot in the series so far, we’re seeing something that should be impossible to see. The reality show is over—this is real.

The Comeback has never shied away from metacommentary, duh, but this is some next-level, Dorothy stepping into a Technicolor dreamworld and realizing she’s not in Kansas anymore shit, a use of the medium itself to convey the message. In a way, it’s also an internal callback to the loathsome drug-dream fantasy sequences central to Seeing Red, writer Pauly G.’s clumsy attempt to articulate his emotional reality by cutting away from reality-reality. But it reminded me of nothing so much as the marvelous magic-realist ending of Hal Ashby’s Being There: Lisa Kudrow’s Valerie Cherish standing in for Peter Sellers’s Chauncey Gardener, umbrella in hand, striding through the and doing the impossible. To say it was the single strongest moment in a TV comedy in 2014 would be to imply anything else even came close.

And yet. Something about “Valerie Gets What She Really Wants,” the finale for The Comeback’s second season and, I assume, The Comeback period, struck me as less than magical: To get what she really wants, Valerie makes a sacrifice no one else is asked to make.

The show presents Valerie’s decision to leave the Emmy Award ceremony — at which she is the odds-on favorite to win an award that represents the summit of professional achievement in her field, the fulfillment of a lifelong dream, and the reward at the end of a long road of suffering at the hands of Pauly G. and her documentarian Jane starting all the way back on the set of Room and Bored — in order to respond to Mark’s distress call about Mickey’s health as an easy one, with Val’s aberrant and compulsive need for recognition the only obstacle. But here’s the thing: That is not an easy call at all! Anyone familiar with the blend of ambition and anxiety that characterizes creative types, and the desire on the part of people genuinely close to them to see those ambitions achieved and anxieties alleviated, could describe the cripplingly conflicted emotions that such a decision would create in someone like Valerie. And understandably so: This genuinely is the most important night of her professional life!

Which is not to say she made the wrong decision to leave the ceremony to be at Mickey’s bedside, nor that the show was wrong to celebrate it. Mickey’s a great guy and an amazing friend, and you could see on his face and hear in his voice how deeply moved he was that Red ran right to him. (Long-overdue kudos to Robert Michael Morris, who takes a role that could be a camp caricature — okay, so it is a camp caricature — but turns it into something warm and three-dimensionally human anyway.) Mark, obviously, was moved too, and it’s sweet to think that even as he cut Valerie off he still bore enough affection for Mickey to care for the guy when no one else could. At any rate, it was a better crowd with whom to witness her win than Jane her self-serious documentarian, Tyler her delinquent nephew, Billy her overly intense agent, and Ron the obnoxious line producer.

But Valerie is only asked to be there for a loved one in a moment of need because her husband, Mark, had refused to do the same for her. Dude didn’t even have the guts to officially decline his invite! Watching him get all teary-eyed and patronizingly grateful when he walks back into Mickey’s room and sees that the love of his life has skipped out on the most momentous event of her life to be there — jeez, is that a portrait in chutzpah or what? Again, it’s fine if Valerie wants to do that, but Mark carries on as if nothing less would do to win him back. Who asked you, Marky Mark? A show that had always been about a damaged but fundamentally decent woman forced to endure a sexist system to achieve professional and personal success is refracted through Mark’s tears to emerge as a cautionary tale about how hard it is for women to have it all. Say it with me now: I don’t need to see that!

And that’s too fucking bad, because Valerie’s vindication on basically every other level was delightful, and screechingly funny, to watch. A succession of obnoxious Hollywood types — randy young women taking creepshots of Val’s handsome ex-costar Chris, tactless dudebros shouting “old woman’s pussy!” at her like it’s a catchphrase, an interchangeable legion of glad-handing agents — are held up next to Valerie to reveal, at long last, that she genuinely deserves better, and is starting to get it. We learn that her friendship is valuable enough to Juna (Malin Akerman, perfect in this role) for the younger actress to be genuinely hurt by Val’s participation in a show that made them both look so bad. We learn that Pauly G.’s prejudices notwithstanding, young hunk Chris (Kellan Lutz, the thinking man’s Channing Tatum) has nursed a serious crush on Val for a decade; as clumsy and, eventually, gross as his attempted seduction was, there’s definite vicarious heat in watching a person get showered in erotic adoration like that. As for Pauly G. himself, his Zoolander moment was a well deserved, decade-delayed public comeuppance; I hope he falls back off the fucking wagon. And oh yeah, this episode featured dozens of human turds on-screen, and that’s not even a metaphor. There’s toilet humor, and then there’s stylist to the stars Brad Goreski screaming “What the fuuuuuuuuuuuuuck???” after falling face down in a river of feces.

The point is that The Comeback Season Two went for the gusto whenever it could, and with every few exceptions this instinct was rewarded with amazing television. Valerie’s audition, the blowjob sequence, the greenscreen episode, the snakes in the trunk, the magic moment when the cameras disappear. But in swinging for the fences in that final scene, it gave the impression that it’s main character was precisely the megalomaniac it had gone to such pains to show us she wasn’t, because how else does that sacrifice make sense as the act necessary to save her marriage? The Comeback killed its faux-reality format and closed its camera eye under the assumption that without the observer, the observed would return to her natural state, but the result rang false. “Of course my man’s showing up in the end,” Valerie said to Billy on the red carpet minutes earlier. “It’s Hollywood, right?” That it is, Valerie. That it is. 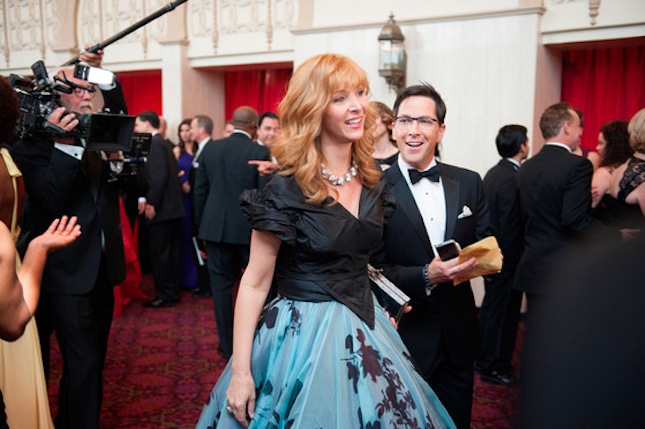