This year, the themes are wide-ranging and every aesthetic from minimalist art deco to over-the-top futurism is represented. During peak hours, more than 10,000 people pass the windows, according to Macy’s. With our handy guide of every holiday hot spot from Macy’s to Bloomie’s, you can be the best-informed of the crowd.

Going down in history as the store where the real, live Kris Kringle first served as Santa in A Miracle on 34th Street in 1947 and the first department store to transform its window displays for the month of December, Macy’s has to be the first stop on any Christmas window tour.

The theme at Macy’s Herald Square this year is “Santa’s Journey to the Stars.” While passing by the store’s six windows, you’ll see the tale of Alex, a young boy with a magic telescope, who experiences Christmas on other planets with his dog, Bella. The story is told in animated form with the assistance of high-definition video monitors.

Designed by Roya Sullivan, the display is made from 85 percent foam, with sculptures specially created to resemble the surfaces of the moon and stars. Ms. Sullivan hopes this year’s windows “will symbolize the power of magical thinking and the tradition of storytelling… We have combined our homage to today’s tech-savvy child with a nostalgic dream to travel through space with Santa.”

If space travel isn’t your thing, the store will also be recreating Yes, Virginia… on the 34th Street block. The windows are on display from Nov. 20 through Dec. 26.

While looking at the displays, you will see the mythical mansion’s paintings come to life and its furnishings start to stir. Video technology will give the traditional sets a contemporary twist.

The company celebrated its windows on Nov. 14 with a performance from Joe Jonas.

Head uptown and you will hit Saks whose theme this year is “An Enchanted Experience.” The Rockettes helped this department store kick off its display on Nov. 24, and the windows have a fairy-tale theme.

Saks has recreated scenes from the stories of Rumplestiltskin, Rapunzel, Cinderella and Snow White with an art deco flourish. The costumes are all from designer collections. Displays are projected onto the store’s façades with six 3D projectors, and the display features a total of 71,000 lights.

The show is an homage to Saks’ birth in the 1920s and will run through the New Year.

Tiffany’s is not a department store, per se, but its minimalist and refined windows are a nice palate cleanser for midway through your trip.

“The 2014 windows focus on the energy and sophistication of New York City in the 1950s and ’60s,” Richard Moore, vice president of creative visual merchandising, said. Tiffany Keys, Tiffany Blue Boxes and Atlas jewelry abound, with jewelry displayed on billboards, in taxi trunks and in Central Park.

A light show, inspired by the fireworks display created for the Tiffany Diamond at the 1939 New York World’s Fair 75 years ago, illuminates the store’s façade every 15 minutes from 4 p.m. to midnight until Jan. 5.

Walk uptown toward the park and you’ll hit Bergdorf Goodman, whose holiday windows have an arts theme this year.

The displays depict major art forms such as literature, architecture, theater, painting and music. On 58th Street, the windows depict dance, sculpture and film. And at the men’s store on 57th Street, the sciences have their moment.

Don’t miss the painting display, which featured a 12-foot-tall mannequin wearing a custom, hand-painted gown by Dolce and Gabbana.

Turn right at the park, and you’ll see the trippy and fantastical displays at Barney’s. Baz Luhrmann, Catherine Martin and Dennis Freedman curated the windows this year, under the theme of “BAZ DAZZLED.”

Live performances and mechanical displays unite in these windows, with art pieces by Anthony Howe and Chris Cole. Barney’s truly has the most out-there and unique offerings this holiday season, including an eight-foot-tall, mechanical talking owl that speaks words of wisdom with a cover of Madonna’s “Holiday” blasting in the background.

The Barney’s displays will be up until the new year.

Walk east and you’ll hit the final stop on Third Avenue at Bloomingdale’s. This store had perhaps the highest-profile opening, with Idina Menzel (alias Adele Dazeem) performing at the ceremony.

This year, Bloomingdale’s has an interactive experience with games and other high-tech features in every window. Visitors are asked to use the hashtag #bloomiesgreetings while playing games.

(Correction: A previous version of this post detailed the Bergdorf Goodman windows from 2013 instead of 2014.) 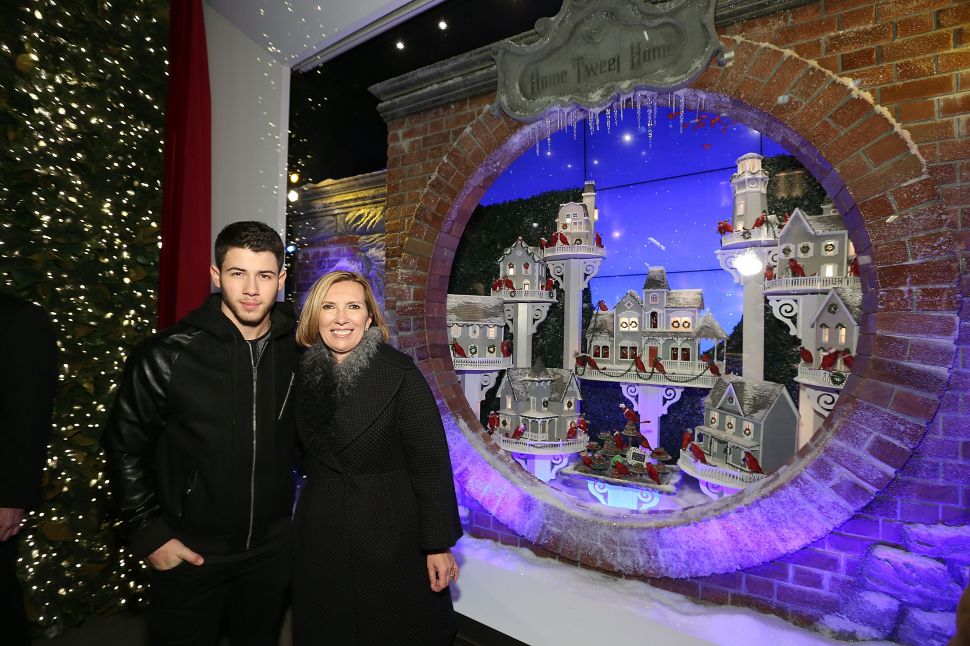