When Archbishop Desmond Tutu visited The Late Late Show in 2009, there was no musical guest or second guest, no monologue of punchlines on cue cards and no witty banter with a sidekick or band leader. As it was for 10 years, it was just Craig Ferguson, his audience and the direct, passionate style he perfected.

Ferguson reminisced about the Peabody-winning episode and specifically his interview with the archbishop in a conversation this past Monday night at the Paley Center for Media in Beverly Hills, recalling a shared moment during a commercial break.

“This is a man who talked to some crazy motherf****rs,” Ferguson said. “He said to me, ‘You’re crazy – I don’t mean to be rude.’ I said, ‘I thank you, Father Tutu.’ He said, ‘No,  you are crazy, but the type of crazy we need.’ And, this is not your agent, you know, he’s not like, ‘Keep doing the crazy thing!’ It’s Desmond Tutu saying ‘Be as authentically crazy as you are.’ It was kind of like God saying ‘Just be as crazy as you like.’ I felt weirdly released by that.”

To say he embraced that insanity would be an understatement.

Craig Ferguson will end his run as host of The Late Late Show tonight after 10 years and 2,058 episodes behind him. The announcement of his departure came during a wave of surprising changes for CBS this past spring, when Late Show host David Letterman announced he would be retiring from the business, and it was soon decided Stephen Colbert (who ended his nine-year run as host of The Colbert Report last night) would take over. Ferguson followed suit, announcing he would finish up the year and then move onto something new. In turn, actor James Corden will take over the 12:35 a.m. time slot in March 2015.

Like much of Ferguson’s run, his exit has mostly fallen under the radar, overshadowed by a frequently changing late night lineup and passed over for more appealing time slots. But while the eyes were off of him, he created the best show you weren’t watching and something truly fearless and unique, a rare concept in the programming world of rehashes and reruns.
[youtube https://www.youtube.com/watch?v=Scpo9hvXitE]
In the best possible way, watching The Late Late Show could sometimes feel like a giant hallucination. Essentially an “anti-talk show,” the hour-long program deconstructed late night traditions with as little structure as a nightly show could manage.The cold open could be anything – a sketch, a musical number, an interrogation of an audience member. There was no band and sometimes no power. The majority of his tenure was shot in a poorly lit studio (which he often referred to as his basement) and even the theme song basically says, “…well, you’re already here. Might as well stick around, right?”
[youtube https://www.youtube.com/watch?v=unGikCVwwR8]
There was the sidekick. Like Dave has a Paul and Conan has an Andy, Craig had Geoff Peterson (voiced by Josh Robert Thompson), a gay robot skeleton working from behind a podium. Peterson, who first appeared on the show in 2010 originally had only a few prerecorded catchphrases to poke fun at the occasionally tepid banter between host and sidekick in standard format talk shows but eventually evolved to the fully operational and quick-witted “fake sidekick” that Ferguson played off of from cold open to closer.

He also had Secretariat, a pantomime horse who would previously come out and dance when a doorbell chimed and Ferguson cried out, “Who’s that at the door?” who eventually got moved to a stable stage left when the studio got a revamp in 2012. There were puppets, such as the adorably vulgar Sid the Rabbit and the Cajun crocodile Wavy Rancheros. There was Sandra, a remote controlled rhino head above the studio’s faux fireplace, marionettes of both Drew Carey and Morgan Freeman and impressions ranging from Larry King to Sir Michael Caine.
[youtube https://www.youtube.com/watch?v=QVngV531tVU]
Gags would come and go. Sometimes they received complaints and then their appearance frequency would dramatically increase. Sometimes they would never leave (do we have a picture of Paul McCartney?). But they were in place at one point or another because they made Ferguson laugh, and the audience was just lucky enough to be their for the ride.

Where Ferguson thrives most is not in concept or structure but in practice. His monologues were fresh and riffed from a list of talking points, a style he adopted only a couple months into his run when he figured out the ad-libbed filler he would deliver between scripted jokes got more laughs than the jokes themselves.

As for interviews, there is no one else on television even close. In typical Ferguson fashion, the list of producer-prepared questions he had for every guest immediately ended up torn into pieces and thrown on the floor. If there were boundaries or lines to be crossed, Ferguson was an expert at hiding them. He forced his guests to think on their feet and loosen up a bit. It was like you were eavesdropping on somebody’s conversation rather than watching someone try and peddle a product, even when a guest had a project to promote, it was done like two friends were just catching up. He had an incomparable ability to turn the uncomfortable or the impossible into the highly anticipated and enjoyable, never more evident than when a guest got to choose how they wanted to end the interview.  They could play the mouth organ or try and win the Big Cash Prize or touch his glittery ball (he’s still working on that). Or they could choose the awkward pause, where they would sit in feigned awkward silence and Ferguson – representative of his skill to turn something out of nothing – still managed to make 30 seconds of completely silent airtime hilarious.

What has worked for The Late Late Show could not necessarily translate well to other shows of the same format, but it allowed it because of Ferguson’s willingness to be unfiltered and open and honest with his audience and himself. A first-time viewer could surely pretty quickly point out one of the most jarring differences between his show and his counterparts’ shows: a really obvious disregard for the censor. Sharp-witted and foul-mouthed, it wasn’t an episode without seeing at least a handful of world flags edited over the host’s mouth, much to the chagrin of producer Michael Naidus, whom Ferguson would jokingly call a racist in return.

While he was always funny, he was also observant (sometimes cynically so), inspiring and frank, usually combining heart with humor. In 2007, while the rest of the late night world tore Britney Spears apart for her breakdown, Ferguson dedicated his monologue to defending her, opening up about his alcoholism, drug abuse and near suicide. He spent a whole episode each to eulogize his parents after their individual deaths. A man so enthusiastic in his patriotism that he reminded us every day that it was, in fact, a great day for America, he dedicated his first show back after being granted United States citizenship to his new status, including a taped segment on the ceremony and a pipe and drums performance by The Wicked Tinkers, which Ferguson joined in on to prove he was still just as Scottish as he was American.

And then there were the not-so-great days for America, like the first show back after the 2012 movie theater shootings in Aurora, Colorado, where he delivered his cold-open in plain clothes behind his desk, or his monologue after the Boston Marathon bombing in 2013, venting on “random acts of madness” and insisting he wasn’t a good enough comedian to continue the show pretending nothing happened.
[youtube https://www.youtube.com/watch?v=1RLv0WwWSDM]
That ability to combine heart with humor is what has earned Ferguson his loyal following over the years. And while he is often dismissive or flippant about his effect on his audience (in a New York Paley Center conversation with New York Times reporter Dave Itzkoff in 2012, when an audience member asked during Q&A what he believes is the cause of an almost cultish fan base, Ferguson cheekily responded, “Estrogen.”), there is no denying that the anything goes, no nonsense mentality of The Late Late Show resonated with many. The relationship between Ferguson and his viewers was one of mutual understanding and empathetic. The casual viewers found something they could click with, and the most loyal ones recognized themselves in it. It is fitting that Ferguson referred to his Twitter fans as his Robot Skeleton Army. It is also fitting that he spent a portion of every show answering tweets and emails from viewers, that he flirtingly addressed viewers as “filthy pigeons” or “cheeky monkeys,” that he still toured around the country most of the year, despite doing a show five days a week. The show’s cultish following was so because of Ferguson’s unmatchable ability to connect with those he wanted to be around, whether he wanted to admit it or not.

The Late Late Show with Craig Ferguson was special and will always be special. The show diverged from the path, sometimes so far that it ended up in different countries for a week, like Ferguson’s native Scotland where he and special guests, such as Mila Kunis, David Sedaris and the late Michael Clarke Duncan gave viewers a virtual tour. His 1,000th show was hosted entirely by his puppets. He once dedicated an entire episode to the BBC sci-fi show Doctor Who, complete with a choreographed musical number. He hosted an audience-less episode and just spent the hour talking one-on-one with guest Stephen Fry.
[youtube https://www.youtube.com/watch?v=M9P4SxtphJ4]
And every minute of all of it was wonderful.

No one could ever prepare you for watching an episode of Ferguson’s Late Late Show. A friend could not sit you down and explain it (“Well, it’s really meta and deconstructive and there’s a horse”). There was really no good way to recommend it. It was something you discovered and became a part of. You had to stumble upon it on your own, perhaps restless or bored or simply curious while flipping through channels when your eye quickly caught some of the madness. And that’s the best part. It was an unexpected gift. At its worst, it could still send you to bed grinning and comforted. At its best, it was art. It was silly and fun and truly not like any other late night show.

Or better put, it was the crazy we needed. 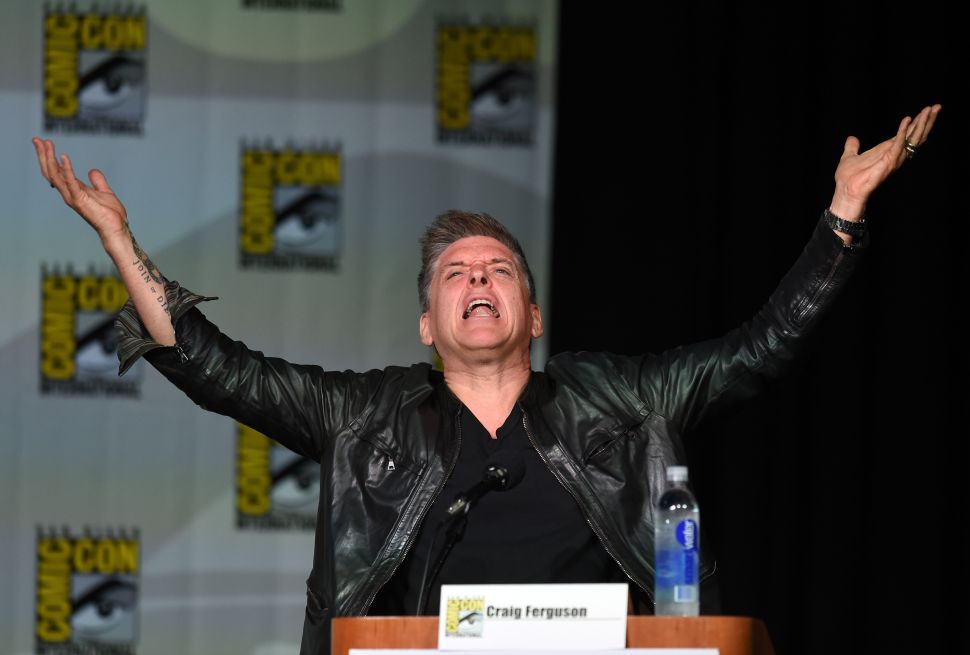