The Millionaire Matchmaker is back, and dang, it got fancy.

Gone are the days when Patti and her matchmaking crew would watch millionaires’ lame-o application videos on a screen in their office. Now, clients are interviewed on a fancy set that looks like something from backstage at the Grammy’s, or at least an American Idol audition.

First up is Melyssa Ford, a 37-year-old real estate agent who’s no stranger to Bravo—she’s also a cast member on Blood, Sweat and Heels. Not-so-fun fact: Back in October, one of her cast members reportedly hit her with a vodka bottle, and she had to get three staples in her head. WTF?!?!

Anyway, Melyssa also used to be in music videos, and she has a hard time finding guys who care about more than just her appearance. “For the guys that don’t really want to find out who I really am, good riddance to bad rubbish,” she says. Get it, gurl.

Before we find Melyssa a man who doesn’t care about her butt, let’s check in at matchmakin’ headquarters. Patti has a new director of recruiting, Candace. Here’s what we know about Candace so far: she’s worked as a “love coach, life coach, lawyer [and] actress,” and when asked if she wants pasta for lunch, she responds, “Salad for me—I’m trying to keep it tight.” I MISS DESTIN AND RACHEL SO MUCH YOU GUYS.

But don’t worry, you guys, our pal Patti is the same as always. “You’ve got a great ass for days—Kim Kardashian has nothing on you,” she tells Melyssa. The problem? She’ll never find a husband if she leads with her body. “Nix the vixen,” Patti says. “Men don’t realize you’re a person when you lead with sexuality.” Could it be that the problem isn’t Melyssa, but that most men are just dumb, creepy pervs?

Our second millionaire is another D-list celeb (I told you this season was fancy). It’s Larry Birkhead, whose name you may recall from the paternity battle over Anna Nicole Smith’s daughter, Dannielynn. Larry, who hasn’t dated since Anna, lives with Dannielynn in Kentucky and spends a good hunk of his time working on Anna’s estate.

Oh—his house is also basically a shrine to Anna Nicole Smith, which should be really fun for any future girlfriends he brings over.

Shockingly, Patti’s concerned he’s living too much in the past. Personally, I’m just concerned about whether Patti’s wearing any pants (and if not, does that mean it’s at least okay for me to wear leggings to work all day everyday? Yes? Thx).

Speaking of Patti, it seems like this season she’s 50 percent less mean, and 100,000 percent more whispery spiritual healer. “If you’re so busy with your relatives and your daughter, you have no time for you,” she tells Larry. “No time to fall apart and to feel. But when you feel, you love. You understand?” LOL OK Patti.

Eventually, she concludes that Melyssa is still a husband-less loser because she’s been leading with her vagina all this time. You hear that, you sad, single ladies? LESS VAGINA.

I’m not sure Melyssa got the message about nixing the vixen or whatever, because this is what she wears to her mixer:

She proceeds to have an awkward conversation with a group of guys hand-picked by Patti. You know you’re running low on conversation topics when a guy’s asking you, “So, are you in love with animals?” Still, there’s a guy named Jay who seems like a swell gent, and Melyssa picks him for her master date.

Larry, meanwhile, is so romantically inept, he doesn’t even get to pick his own master date partner. While Patti interviews potential ladies for is blind date, Larry has to do pick-up practice with Candace. It doesn’t go well.

Once Larry figures out how not to be an awkward creep, it’s time for his blind date with Michelle, a mom of two who casually competes in jiu jitsu (same). For their date, they do a private tour of Universal Studios.

“Patti said I was supposed to be the hunter—she didn’t say anything about killing sharks,” Larry says as they pass the set of Jaws. I die a little bit on the inside, but Michelle seems to like it. Next, they go to the set of a plane crash and Michelle pretends to be a dead body (sexy!). Larry must be into it though, because he rescues her like she’s a damsel in distress. Moving on.

Onto Melyssa’s date! Like a proper gentleman, Jay remembered Melyssa saying she liked bowling, so that’s what he planned for their date. As I watch them bowl, that embarrassing thing happens where I realize I’ve been sitting alone in my living room, genuinely smiling for a long period of time. They’re actually really cute together. They seem to love each other in a way the Internet will never love me back.

Back to Larry and Michelle. Michelle must be a huge Game of Thrones fan, because she dresses up as Melisandre for the dinner portion of their date. After talking for a bit, they do the Lady and the Tramp spaghetti thing and oh god it’s so painful and you just know Larry has watched way too many Disney movies with Dannielynn. Make it stop make it stop make it stop. Oh well, at least he got a kiss, I guess.

Meanwhile, Melyssa and Jay are having a much less cringeworthy dinner date. After an emotional convo about their dads, Jay takes Melyssa out to the patio, where he’s prepared a bunch of cigars for them to smoke. He’s also hoping to get a kiss, which seems like a terrible activity to pair with cigar-smoking, but whatevs. After Melyssa shows him how to smoke—she’s apparently really into cigars—the awkward porny-sounding tracks start playing, and the two lean in for kiss.

After the dates, Patti follows up with Melyssa, Jay, Larry and Michelle. Everyone loved their dates, and Patti’s the best matchmaker ever! In the little epilogue, we learn that Larry and Michelle are planning another date (more plane crash re-enactments?!) and that Melyssa went back to New York and found another guy. Sucks to suck, Jay. 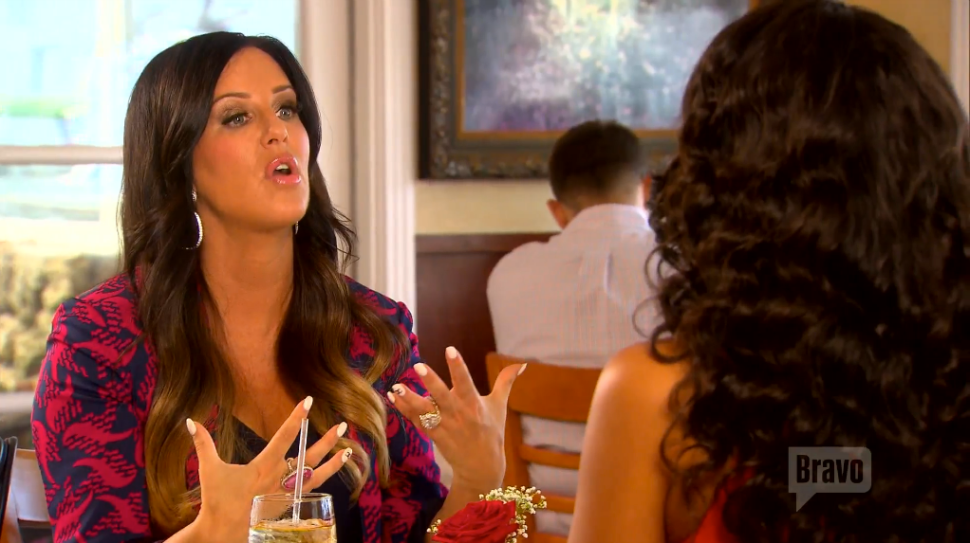