Welcome back to the Millionaire Matchmaker, the show where single rich people try to find love!

Our first millionaire of the week is 43-year-old Rozonda Thomas, A.K.A. “Chilli” from the band TLC. Remember when Chilli had her very own show about finding love? I guess it didn’t work, because here she is again.

Chilli’s problem, we learn, is that she’s always picking the “bad boys” in the entertainment industry (the fact that she dated Usher is somehow evidence of this, according to Patti). If Chilli’s going to find a good, loving guy who’ll have more kids with her, she’s going to have to open her mind, Patti says.

Right off the bat, something seems odd about this episode. Chilli says she never has time to date because she has to perform in so many concerts. The majority of her B-roll is a shot of her assistant checking a calendar and rattling off all her upcoming travel and performance dates. Oh wait a second—apparently, TLC is still a band, and they’re going back on tour. Will this entire episode be a promo for Chilli’s dwindling music career? Yes, yes it will.

On to our second millionaire, 38-year-old Jeff Ogden. At first I don’t recognize this C-list celeb, I think maybe they’ve incorporated some regular millionaires onto the show, but then I realize the only reason I’ve never seen him before is that he’s a ~sports~ person—a former NFL player, to be exact.

Jeff has an abysmal romantic history. As we learn from his conversation with Patti, he’s been married twice before—once for a month, and once for a SINGLE DAY, a la Britney Spears. He’s also been on Millionaire Matchmaker before, but things didn’t work out there, either. I hate to be the one to break it to ya, Jeff, but YOU ARE DOING SOMETHING WRONG.

Jeff tells Patti his celebrity crush is Jessica Biel, and that he’d like to a meet a woman who’s interested in charity work. Riveting. Maybe he’s just nervous, but he seems a little boring. “I feel like Jeff is on autopilot, like he was trained by his mother to say the right things, but does he really mean it?” Patti tells the camera. “We’ll see.”

Can we pause to acknowledge how funny the #tech is that they use on this show? Like, what even is this program, and is it actually making anything easier?

Anyway, Patti thinks Jeff needs some tweaking in the dating department, so she calls in John Salley, a former NBA player who’s apparently also a “wellness advocate,” which sounds like a totally-not-made-up job title. In case you were interested, here is an actual excerpt from John Salley’s personal website:

“Most can achieve a goal and be pleasantly satisfied with their results but to continually create new tasks to accomplish and to reinvent yourself is the mark of a versatile and motivated individual.  It is the definition of father, athlete, actor, entrepreneur, talk show host, philanthropist, wellness advocate, vegan and champion: John Salley.”

None of that implies he knows anything about dating, but that’s okay! John tells Jeff he needs to stop thinking of women as property (truth) and to get rid of his ego. John, I have no idea what your actual job is, but I like you.

Time for Patti’s recruiting sesh. They’re different this season—instead of making people line up in her office and systematically humiliating them, Patti brings everyone to a bar and systematically humiliates them there. One potential match for Jeff is a server at Sur, but I don’t think I’ve seen her on Vanderpump Rules. She tells Patti she’d happily move to Texas for a man. Should somebody tell Lisa?

Chilli has to choose from three guys: Sebastien, a personal trainer with the most insane abs I’ve ever seen, Brian, an asshole-y stuntman who, according to Patti, is the kind of guy Chilli usually dates, and Felix, an adorable Polish guy who seems like a fun dude. As Chilli talks to the three of them, she just HAPPENS to mention how TLC is touring right now, in case you weren’t already aware. Anyway, Chilli chooses Brian, even though he sucks.

Jeff, meanwhile, has to choose between Jessica, who runs a humanitarian organization, and Giulini, whose name sounds like a fruity cocktail and who loves fitness. Jeff is super boring, Patti’s getting frustrated because he’s so passive. She says he’s acting like a turtle.

Chilli meets Brian at a restaurant for their date. Because Patti isn’t confident the date will go well, she, Derek and Candace hide in a corner and use more #tech to eavesdrop on their conversation. Surprise, surprise, Brian is the worst—he and Chilli have no chemistry, and turns out he also lied when he’d said he wanted more kids. Patti swoops in and removes him from the date.

Luckily, Patti knew this would happen, so she had Felix on hand all along to step in as a replacement!

Meanwhile, Jeff takes Giulini to the L.A. Boys and Girls Club to play football with some kids who definitely didn’t know what they were doing when they consented to being on this show. Jeff gives Giulini special eye blacks with hearts on them (romantic?!), and the kids say it means he has a crush on her.

Back at the ranch—literally, because Felix takes Chilli to a Western-themed bar—Felix and Chilli have a go on a mechanical bull. I’m half-expecting Chilli to say, “This bull is wild, just like my experience on tour. Did you know that I’m going on tour?” Thankfully, she doesn’t. Instead, she and Felix proceed to play pool, and eat a massive tower of cotton candy. They’re laughing a lot, and it looks like fun.

Felix goes in for the cotton candy kiss—was he taking inspiration from Larry Birkhead’s spaghetti move?—but Chilli doesn’t seem into it. She does the whole “I-don’t-want-to-kiss-you-so-I’m-just-going-to-laugh-nervously thing. Sry, Felix.

Part Two of Jeff’s date is a trip to the spa. He’s planned for a masseuse to give him massage lessons—using Giulini’s back to practice. It could be cute, but it also could be creepy.

Same goes for the next spa activity: bath time, with champagne. Personally, I’d be pretty pissed if a guy made me look this sweaty on national television:

Still, Jeff gets a kiss in the end.

To cap things off, Patti follows up with Chilli and Jeff after their dates. Though Chilli doesn’t really have feelings for Felix, Patti says it’s okay, because at least she’s more committed to dating now, and willing to open up. Uh, okay? Have fun on tour, Chillz!

As for Jeff, he enjoyed the date, but it turns out Giulini doesn’t want a second date with him. Could it have been the excessive sweating? Overall, this episode accomplished nothing except informing me that TLC is still active. Speaking of which, anyone want to check out one of their concerts? I hear they’re touring. 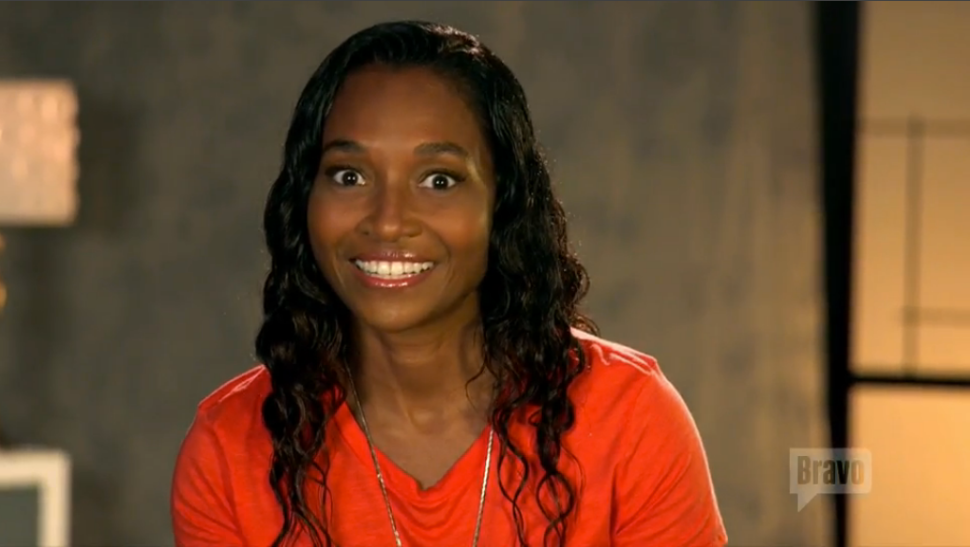