Fall 2014 has been a great season to see Austrian art in New York galleries, first at Hauser & Wirth and Maccarone in September and now with three stand out shows at David Zwirner, Simone Subal and Fergus McCaffrey—some works humorous, some dreamy, all slight perversions or tweaks of the canon.

Franz West (1947-2012), at Zwirner through December 13, the best-known artist of the bunch, is the pope of crude psychosexual sculpture and mixed-media provocations. This show features works from the 1990s, largely works made on or as furniture. In 2 to 2 (do too 2 [too do 2 {to do two}]), 1994, four bookshelves filled with German philosophy and critical theory serve as pedestals for four colorful, cartoonishly gloopy papier-mâché sculptures.

Elsewhere in the gallery, two fabric-covered couches invite the viewer to sit, while one corner serves up West’s own table and chair set, replete with duct tape-wrapped bottle koozie, surrounded by art he loved (Martin Kippenberger, Albert Oehlen and Mary Heilmann). Art has a function here, the show insists, and this notion is most fully realized in West’s passtücke, abstract sculptures made to be carried that bring out the neuroses in the user (several rather funny videos of people carrying West’s unwieldy work are on view). There is a wall of photomontages of nude men and women from the series Untitled (Investigation of American Art), 1991-1993. One sculpture features a liquor cabinet base.

Birgit Jürgenssen (1949-2003), once a student of Maria Lassnig at the Academy of Fine Arts in Vienna, is going through a moment of American discovery. Her photographs lie somewhere between the Surrealist self-portraits of Claude Cahun and the early film stills of Cindy Sherman.

On view here at Fergus McCaffrey Gallery (through December 20) are a small selection of her subversive objects (1967-1979), including a crown made from women’s shoe heels and a small, wax-and-hair sculpture of a woman’s arm that looks like a scorpion (or like a mini-Robert Gober). There are also grids of photographs, mainly from the 1990s. These often consist of three, six, or nine individual prints combining zoom-in performative self-portraiture of body parts (moodily lit lips, eyes, navels) with images of light fixtures, droplets of , or other tight-focus subjects. Each 8-by-11-inch photograph is covered with fabric, giving prints a noirish, textured effect.

The knockout in this show is her Raymond Chandler Bookshelf (1990-91), an arrangement of 14 photographs and six “shelves,” which the owner is welcome to fill with the novels of Raymond Chandler. “Be really creative, refuse your role,” she wrote in a notebook, and the show suggests that until her 2003 death from breast cancer at the age of 54, she did just that.

In a show downtown at Simone Subal Gallery, works by Austrian expatriate Kiki Kogelnik (1935-1997) pick up on thematics of the 1960s and 1970s including the moon landing, vinyl jumpsuits and free love. A peer of American Pop innovators like Roy Lichtenstein and Robert Rauschenberg, Kogelnik’s brightly colored, often sci-fi themed ink-on-paper drawings and acrylic-on-canvas paintings sometimes incorporate space-aged materials like Plexiglas or plastics. Collage becomes a way to investigate the physical world; in the drawings, fingers and scissors enter into orifices with impersonal, orgiastic glee.

In the collage The Woman who Lost her Head, 1964, a female figure rolls by on a ball echoed by the stuttering, psychedelic pink circle of her head. In the silkscreen Woman’s Lib, 1971, a trenchcoated Kogelnik stands with an enormous pair of scissors, multi-colored silhouettes lying cut or castrated at her feet. While she’s well-known in Austria, she is little-known in the U.S. This is the gallery’s second show of her futuristic feminist fantasies (open through December 19) and it might be the biggest surprise of the bunch. 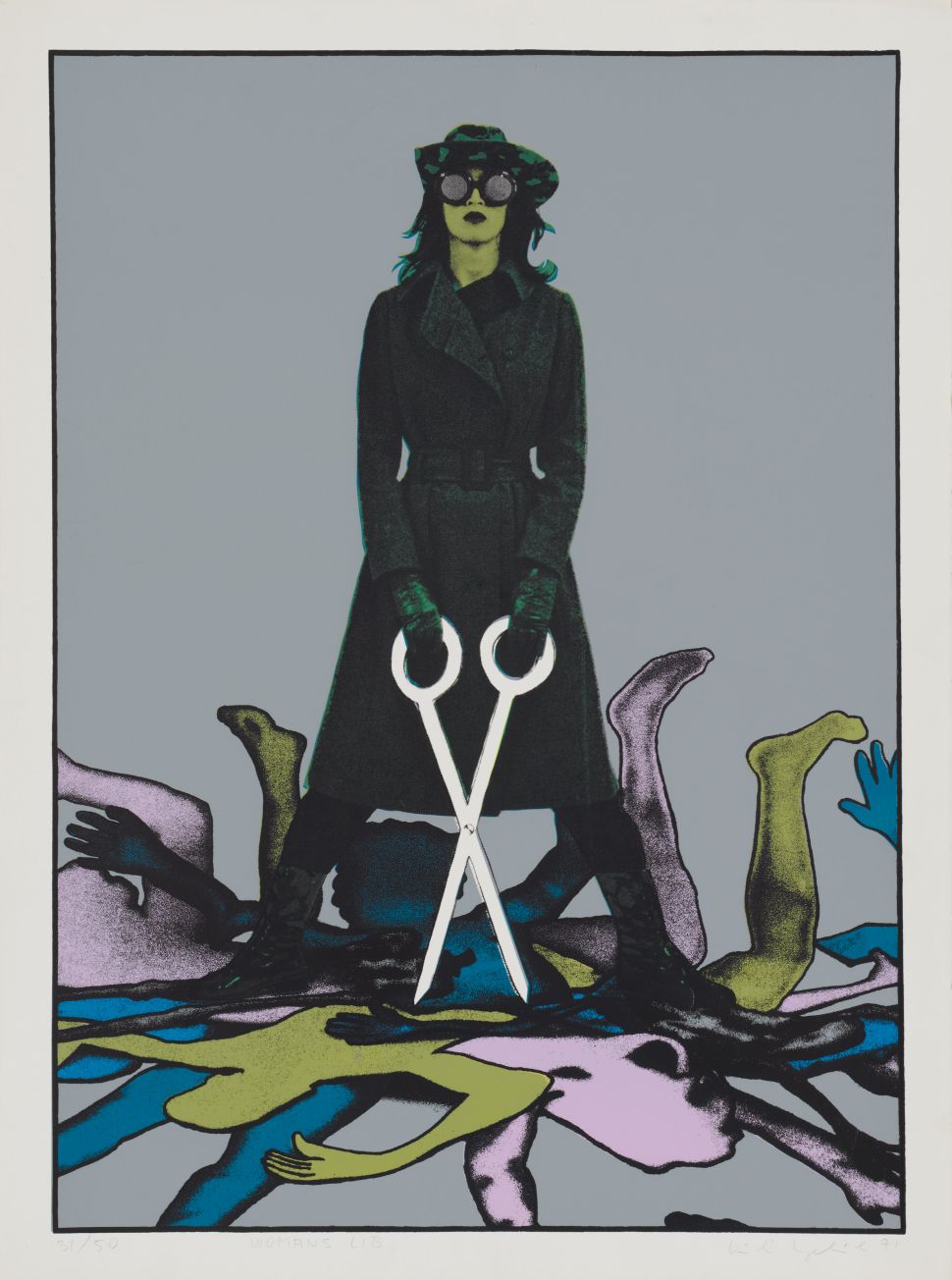