I wish there was a German word for how tonight’s episode of The Newsroom made me feel; some combination of horror and repulsion bolstered by an angry smear of righteous satisfaction. I’m glad that Aaron Sorkin has fucked up this cosmically–wherein the prescient issue of campus rape is Mansplained to an (alleged) Princeton victim by a male producer–and not because I have it out for Aaron Sorkin. I’m glad that this terrible, absolutely reprehensible hour of television exists because it’s totally eye-opening, especially in light on the Rolling Stone controversy. Yes, there are some people out there who think that rape victims need to be silenced because of the potential damage done to the reputations of those they accuse.There are people who think that when it comes to rape stories, the journalist’s role suddenly shifts from just sharing the several sides of a story to establishing some kind of verdict in advance — even if it means silencing “questionable” accusations before they see the light of day. There are people who believe they are “morally obligated” to believe the testimony of a “sketchy” guy over a woman who has “no reason to make (it) up,” (their words!) because presumption of innocence isn’t just for defendants in criminal trials.

Funny enough, those people are also the ones with television shows on primetime, lecturing us about the ethics of journalism. Aaron Sorkin is those people.

The episode started out queasily enough when Charlie tells Don to go bring him the student behind Princeton’s victim website to go debate her attacker on live air. Don demurs, saying he doesn’t know how to do this story. Because when in doubt about how they, personally, feel about an issue, ACN’s producers have the time-tested method of staying silent and not reporting the issue at all. This is, we are to believe, the “noble” or “right” thing to do, but it’s also why they were in fourth place in the ratings. But with the new owner, ACN is being forced to care about things like “ratings” and “traffic,” which we all know exist in direct moral opposition to journalism. ACN’s new slogan, which disgusts Mac and Don, is “You aren’t a consumer. You are a citizen, you are an activist. You aren’t a viewer, you are ACN.”

“THE NEXT ONE IS GOING TO SHOW CITIZEN JOURNALISTS FILING STORIES FROM THE COFFEE BEAN!” – Mackenzie, losing her mind.

So Don doesn’t know how to do the story. Charlie snaps at him, “You interview the student with the website, you interview one of the guys that’s accused, how is that complicated?”

Now here the episode had a choice. If we still lived in the idyllic West Wing universe, maybe that’s direction would have been taken at face value, and we would have all felt this week’s big headline news from a different perspective. But it wasn’t. Because Don makes a choice: that instead of standing up to his boss and saying no, he’ll just go track down this student Mary (Sarah Sutherland) in her dorm room at Princeton and try to convince her not to come on the show himself by explaining how it might damage the reputations of men accused on her site.

Right, so, read that again: a news producer solicits an interview request for a young woman to appear on his show in dialog with the man she says raped her. The producer then shows up, announced, at this girl’s apartment (after loads of sleuthing!), just to chastise her for speaking out. And beg her not to do the interview. His interview. For his show.

I mean, it boggles the mind.

Before we go any farther, let’s take a breather and remember that Will is in jail, talking to a guy who (spoiler alert) turns out to be ghost dad. No, not that Ghost Dad. (Although that is some unintentional commentary, huh?) I mean, the ghost of his dad. Also Mackenzie is so mad that Charlie is making her cover Lady Gaga when her segment does have a second to spare. How will viewers ever find out if Ed Markey won John Kerry’s senate seat??

Okay, back to Don lamenting to Mary. “It will bring a lot viewers to my show, drive a lot of Internet traffic,” Don says in the same disgusted, apologetic voice of someone admitting they stole money from their baby’s college fund to buy crack. It’s the ugliest truth in the world for him. “I’m here to beg you not to do it.” Don then reveals that he’s already spoken to one of the men Mary’s accused, and he’s agreed to go on the show. Apparently that finger wagging speech, where Don implores that guy not to go on his show, didn’t go over well either.

Now, if I was a producer trying to prevent someone I actively sought out to appear on my show from appearing on my show (???), I might argue that they’d be opening themselves up to public judgement and criticism. That Mary, whose identity was anonymous on the Internet, would now be facing harsh scrutiny from millions of Americans who would question every aspect of her story. That she might want to not go down that road. Nope. Don doesn’t do “easy.” He might actually not know the definition of the word. Don’s first argument is: “Don’t publicly face your attacker on national TV. It will hurt his job chances.”

To recap Don’s concerns, again: That Mary has created something that allows women to ruin men’s lives by accusing them of rape. And while doing that on the Internet is one thing, as he puts it, “Its a huge, dangerous scary as shit mistake to convene your own trial in front of a television audience.”

“The law might acquit,” Don says to a woman who couldn’t even get her case into court, “but the Internet never will. The Internet is used for vigilantism ever day.”

Forty minutes in, Don does mention the possible consequences that Mary herself might face if she goes on air. And yes, the term “slut-shamed” is used.

“Its sports, Mary,” he says, aghast at his own…career? I guess? “You’ll be covered like sports.”

Still, Mary pushes to do the segment. So Don does the only ethical thing: he goes back to his boss and tells him he wasn’t able to locate the person behind the website, and the segment won’t be happening.

This literally kills Charlie, who dies of a heart attack on the spot, but not before standing up to ACN’s new owner for a completely unrelated matter involving Dax Shepard’s whereabouts. 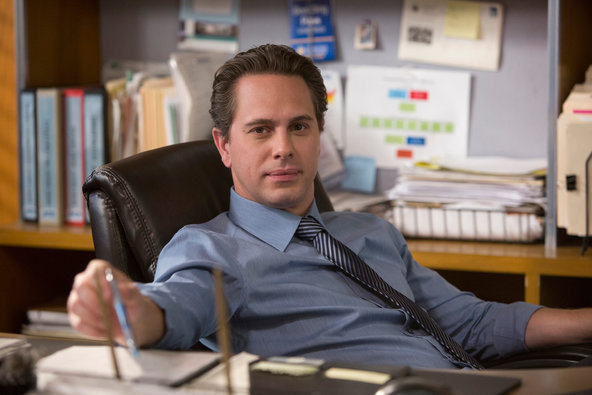