Mickey Ashmore is not your typical dealer. He would rather give you a drink than a hard-sell. If you are interested in his shoes—Sabahs, they are called—you must email him, because you can’t buy anything on his website. You can, however, follow him on Instagram, and chances are once you do, you will find yourself shortly thereafter in his East Village townhouse where he both lives and works.

Mr. Ashmore is confident, relaxed, and quietly on the edge of boiling-over with energy. He is well-dressed with a head of curls that he hasn’t stopped toying with, brushing back to reveal a set of heavy brown eyes. “People come here and ask me why I don’t have an ecommerce site, and why I’ve taken this approach. It’s not new. It’s the old approach, and I don’t think it’s better or worse, but it’s what works for us. What we do does not always make sense to the outside, or even to me – and I probably need to think about it more—but its very intuitive and it works.”

The Sabahs originated from an old approach. Originally from Texas, Mr. Ashmore relocated to Turkey in 2010, one year deep into a corporate leadership program with Microsoft—his first job out of Wharton. What began as a six-month placement evolved into a two-year adventure, punctuated by a fling with a local young woman. The relationship ended, but Mr. Ashmore held onto a gift from her grandmother—a pair of hand-stitched leather slippers, the traditional footwear she grew up wearing.

In August 2012 he returned to New York.and wore the shoes constantly—to work, for drinks, in weddings, and everywhere in between. After enough like-minded souls asked where to find a pair of their own, he reached out to his ex and requested an intro to Mr. Orhan, the shoemaker, and he outfitted all of his friends. Feedback was consistent—though classic and easy to wear, the design did not sync with a Western aesthetic: the toe was upturned, the back was too long, and the patterned leathers lent more to a sock or a slipper than an everyday choice of shoe. Mr. Orhan and Mr. Ashmore collaborated on a new design—a project that would lay the foundation for their future company.

Over time, the pair transformed a shoe which had been produced in Gaziantep, Turkey for almost a thousand years. Throughout this process, the integrity of materials and construction remained intact—particularly the stitching, which according to Mr. Ashmore is the most unique element of the design, a wax cotton string hand-fed through buffalo leather. Once the men’s shoe was complete, they created a more feminine style for women. Then, they developed a process to do everything efficiently.

“Texans historically have a ‘lets do it’ attitude. We shoot from the hips—often, we shoot and we miss, and we fail. With Sabah I didn’t make a business plan, I just did it, and it made sense to me.” On June 18th, 2013, Mr. Ashmore introduced himself as The Sabah Dealer, complete with 200 pairs of the reworked design. All summer, Mr. Ashmore sold the Sabahs, and at the end of July he quit his job to devote himself to the business.

In Turkey, Mr. Orhan continues to sells the shoes to all the traditional Gaziantep bazaars, but they are nothing like Mr. Ashmore’s Sabah. As Mr. Orhan’s sole buyer outside of the country, the two have developed an unbreakable rapport—neither is dealing with anyone else. Occasionally, Mr. Orhan will receive emails from around the world—one enthusiastically claiming, “I want to be The Sabah Dealer of Switzerland!” It doesn’t happen. There is a personal side to the business, which has unsurprisingly extended through Mr. Ashmore and Mr. Orhan to the Sabah customers, creating a triangle of a relationship.

With ISIS spilling over the Syrian border, shipments out of Gaziantep are often delayed for weeks on end—due both to holdups in customs, and simply because it was not safe for the team to commute into work. Mr. Ashmore updates his customers by email, explaining not just the delivery times but also how the turmoil is affecting his workers.

“Despite the fact we’ve delivered most of our shoes late, we’ve built a lot of good will through it because we’re trying really hard,” Mr. Ashmore explains. “The shoes are made by a family and things happen. And we make mistakes all the time—we ship the wrong shoes, we record the wrong order. But through our mistakes we’ve built stronger relationships and better customers.” One of those first 50 customers—Gabby—became his one full-time employee in the U.S. The two have started traveling with the Sabahs, recently driving all the way from New York to Atlanta, stopping to host trunk shows in towns along the way.

When you visit Mr. Ashmore at home, you will understand what hospitality means to Sabah. You will be met with a hug, a drink, a smile, and a snack, but you won’t be led to any merchandise. And, when you find what you came for, you will have to forcibly place your credit card into the palm of his hand to seal the transaction. Then you will leave, thinking to yourself, I’ve made a friend for life. And that is exactly what The Sabah Dealer wants. 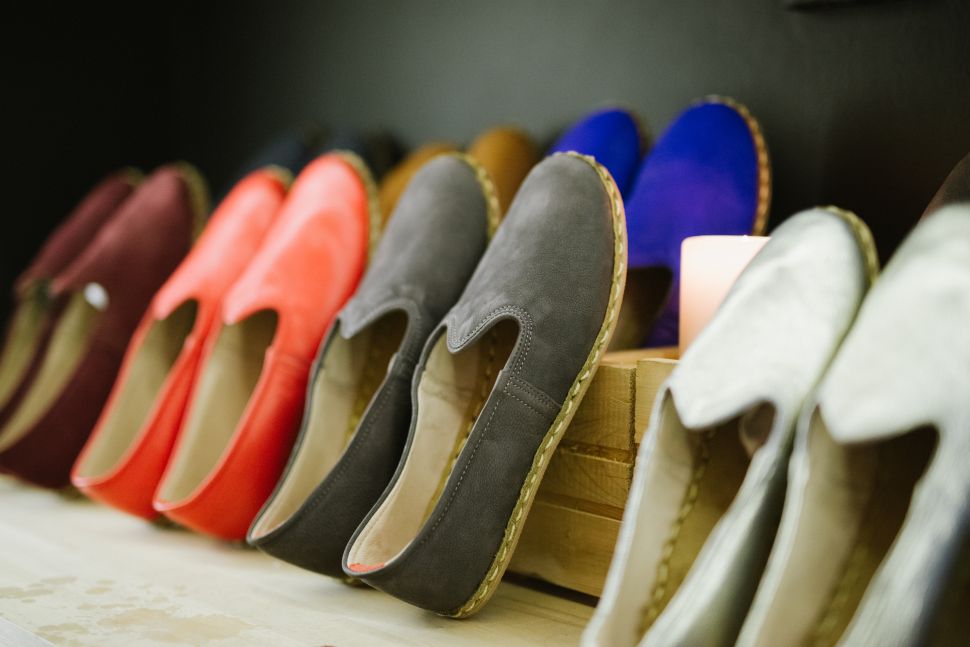