At the start of The Temptations and The Four Tops on Broadway, the special seven performance concert appearance at the Palace Theatre that opened last night, the two legendary Motown groups squared off on stage like the Sharks and the Jets from West Side Story. The joke was acting as if the nostalgic evening would be a singing/dancing grudge match.

From the snatches of songs and a few dance moves the two groups showed off at that point, (“That was okay for a ‘Chitlin Circuit’ group,” a Temptation laughed to one of his counterparts), it was impossible to tell which group might whoop the other’s musical ass. But both The Temps and The Tops are clearly survivors, each having been around for more than fifty years in one configuration or another.

What was unexpected was the roaring performance delivered by The Temptations, especially from their lead vocalist, the take-no-prisoners soul stirrer, Bruce Williamson.

First though came The Four Tops, with Abdul Fakir, known as “Duke”, who turned 79 the day after Christmas and is the sole remaining member of original group. The most famous Top was lead singer Levi Stubbs, who passed away in 2008 and was replaced by the tall and silken-voiced Harold Bonhart. Lawrence Payton has taken his father’s place and Lewis (Ronnie) McNeir stands in for his brother, who rolled out hits for Berry Gordy’s Detroit-based Motown Records like “Baby, I Need Your Loving” and, of course, “It’s The Same Old  Song,” Oh, the irony.

Duke admitted his voice was pretty rusty these days before launching into a creaky version of Sinatra’s “My Way” with the lyrics changed to “Our Way” and featuring an obligatory-feeling homage to the good Lord. The Four Tops’ set, for which they shared strong musicians with the Temps, each with their own music director, lasted a little over an hour. Gentle self-deprecation was the order of the day with comments like “Why don’t you tell them a story so we can catch our breath?”

Seeing the reconfigured Tops, even in their electric blue slacks and flashy jackets to match, felt like watching a PBS pledge drive live on stage, with no sense that new material had been added, patter changed or choreography brushed up in a long time. It was enjoyably benign, the affable Duke leading the way in folksy tributes to the fallen members and the desultory whipping up of the audience of aging fans to its feet. My companion for the evening whispered to me of Duke, not intending to be mean, “Grandpa’s only got one dance move left.”

But then after the intermission, came The Temptations. They had begun the evening in black and silver tuxedos with scalloped lapels, but now walked out one by one in black pants and eye-popping Gold jackets, looking like the foil inside a winning Wonka Bar.  Once they launched in with the horns blaring behind them, it was clear that something very different was happening. The Temps were not only still alive, but with smart choices about new talent, their hearts were pumping. These guys worked up a glowing sweat in the first five minutes they were on stage.

While a charming and dignified, but still loose-limbed Otis Williams represented the only original member of this group where personnel  has changed regularly throughout the years, it was lead singer since 2007 Bruce Williamson that sparked the fire for the rest of the evening.

Williamson, a roundish, bald guy with a beard and no ‘stache led the group in a fully choreographed seventy minute set that kept raising the stakes. He’s a terrific dancer, doing the patented doo wop moves with a relaxed and witty sense of camp.

Vocally, he’s an old school mix of James Brown growls and shouts with church-inflected vocals, that although a little raspy, come out fully formed, with muscular expression that didn’t let up. The Temps blend still sounded great, which is pretty impressive given that, unlike most boy bands we’ve had to endure for the last quarter century, aren’t all tenors singing thirds apart from each other. The Temps harmonies run a crazy gamut from Joe Herndon’s full-throated froggy bass all the way up to the still clear as a bell falsetto of Ronald Tyson. Terry Weeks kept the group’s moves sharp.

“My Girl” and “Ain’t To Proud To Beg” were certified crowd-pleasers representing some of the tens of millions of albums sold over the years. Their seventies period was scorchingly represented by Williamson’s lead vocals, which transformed “Ball of Confusion” and “Papa Was a Rollin’ Stone” with fresh interpretation.  The evening ended with a holiday favorite, their classy and moving version of “Silent Night”.

It’s a wonderful thing to revisit these great Motown artists, especially in a weird kind of generational passing of the guard as even the “Motown” jukebox musical gets set to close early in the new year at the Lunt-Fontanne Theatre down the street. That the Four Tops and their Duke are still making R & B and soul music is impressive, that The Temptations transcend their own history to bring down the house is extraordinary. 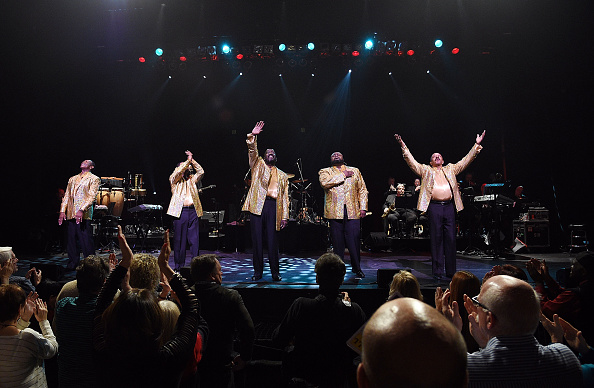