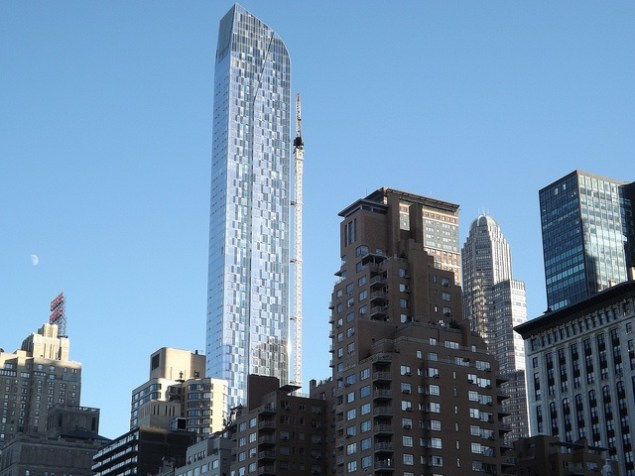 We sympathize with Robin Finn, we really do. By our count, The New York Times’ “Big Ticket” columnist has had to write nine columns on closings at One57 in the last calendar-year, many of them in the last few months, as a flurry of contracts inked long ago finally closed.

It would be difficult for even the most creative writer to make sale after sale at the same new-construction building sound fresh. We, for one, are very much aware of the challenge in cataloging the charms of cookie-cutter new development, one identical, superlative unit after another, an endless stream of selfsame, sprawling condos. But One57 is particularly daunting given the need to write about so many of those sales by virtue of their prices and the high volume of transfers from the sponsor to unimaginatively-named LLCs. It’s a little bit like covering every Mercedes that drives off the lot of a car dealership, lines in an accounting ledger more than unique transactions.

But recently revisiting Ms. Finn’s many One57 write-ups, we were impressed with her efforts to bring warmth to chilly transactions, to add verve to muted luxury, to differentiate between the undifferentiatable.

Still, we sensed her exhaustion in this past week’s column, which opens with the declaration that “another [emphasis ours] full-floor residence at One57,” the Midtown tower that “promises unparalleled vistas of Central Park, the Hudson and East Rivers, and nearly every New York City landmark on the horizon,” was the most expensive sale of the week.

Even the headline writer seems tired, describing the unit as “ready for entertaining.”

And who wouldn’t be? A selection of Ms. Finn’s impressive ingenuity in the face of near-impossible circumstances:

April 11: “90-story spike of bluish glass that does not scrape the Midtown sky as much as puncture it”

May 9: “The prominent tower of blue glass”

April 11: “the ultimate view magnet, 60 feet of park frontage in the living/dining/entertaining area”

May 9: “60 feet of Central Park frontage, the catnip visual that Extell’s president, Gary Barnett, likes to call ‘the beauty shot.’ ”

May 16: “designed… to impress and to grab every available glimpse of Central Park and the Hudson River”

Aug. 15: “Some 60 feet of Central Park frontage can be enjoyed through floor-to-ceiling windows in the condo’s living space.”

Oct. 17: “vistas in four directions, including 60 feet of direct views of Central Park”

Oct. 31: “glass curtain walls that capture 360-degree views of the city and beyond — the Catskills and the Atlantic are part of the scenery on a clear day.”

Nov. 28: “curtain glass walls that provide spectacular views of Central Park, the Hudson and East Rivers and a cornucopia of city landmarks.”

Dec. 12: “Distant views of the Catskills and the Atlantic Ocean are possible on a clear day.”

Oct. 17: “One other thing that the privileged few who buy entire floors at One57 are unlikely to alter is the one-ton bathtub sculpted from a single marble slab that stands sentry in every master bath”

Dec. 12: “The highly indulgent corner master suite is anchored by a one-ton bathtub carved from a single marble slab.”

Oct. 31: “the showstopper a one-ton soaking tub in the master bath that was hand-carved from a single slab of marble and is framed by glass walls”

May 16: “One bath has Italian statuario marble walls and floors, and the other has Covelano Silvergold marble. Both have radiant heated floors for underfoot comfort.”

Oct. 17: “each of the four and a half baths has a different stone finish”

Dec. 12: “Each en-suite bathroom in the bedroom wing is a different type of stone, including onyx, travertine or marble.”

April 11: “The custom eat-in kitchen by Smallbone of Devizes has hand-painted white cabinetry (although buyers at One57 do have the option of choosing a Macassar ebony color scheme).”

July 4: “a kitchen outfitted with an array of Miele appliances and hand-painted white cabinetry by Smallbone of Devizes”

Dec. 12: “The unit has a white Smallbone of Devizes kitchen — buyers could select white or Macassar ebony finishes”

Oct. 17: “the monthly carrying costs are a manageable $7,363, thanks to a tax abatement that has proved extremely popular with buyers.”

Dec. 12: “The monthly carrying costs relatively non-astronomical $12,132, owing to a tax abatement negotiated by the sponsor.”

Even the brokers seem at a loss to come up with new things to say about One57:

Oct. 17: “This is a drop-dead-gorgeous three-bedroom with park views from the living room and master suite,” said Jeannie Woodbrey.

Oct. 31: “The apartment was designed to have as many open spaces as possible,” said Jeannie Woodbrey.

Nov. 28: “You’re in another world up there,” said Jeannie Woodbrey.

Nov. 28: “On a clear day you can see almost every bridge in the tristate area. It’s very special.” —Douglas Elliman broker Michael Graves.

Dec. 12: “A bather can elect to ‘take a steam while taking in the views,’ said Jeannie Woodbrey, a senior sales executive for One57… “We’re one of the only luxury towers that can offer immediate occupancy,”

Let’s hope that when 432 Park starts to close, at least a few of the buyers ink the deeds in their own names to relieve the tedium a little bit. 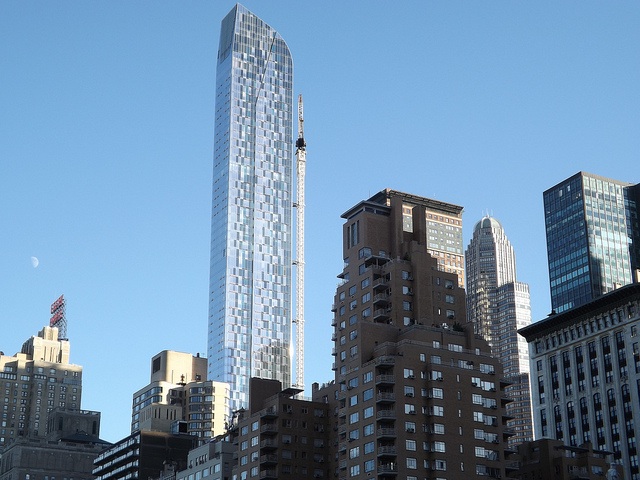