In a new column, Sean T. Collins examines several episodes of HBO’s award-winning drama The Wire at a time to figure out what made it such a groundbreaking show. Whether you’re a fan of the original, or haven’t seen an episode but are still lying to your friends at parties to save face, this is your chance to catch up on the show just in time for its remastered rerelease on December 26th. Find previous entries here.

Towering, intimidating, with a voice like carved granite, Lieutenant Cedric Daniels is the (mostly) benevolent Darth Vader of the Baltimore Police Department, and in Season One’s back half he serves up a summary of the show as dualistic as the Force’s Light and Dark Sides. “The wire is what gives us Barksdale,” he tells Deputy Burrell when the half-stepping brass tries to shut it down. “It gives us the whole crew. Day by day. Piece by piece.” Orderly, methodical, unrelenting. But this is only after he offered a very different spin on the investigation to his wife. “You follow the drugs, you get a drug case,” he tells her. “You follow the money, you don’t know where you’re going.” Every new lead followed, every new piece of evidence gathered is a potential first step on a journey into the unknown. Or as Lester Freamon, the Obi-Wan of the Barksdale detail, more profanely puts it: “You follow drugs, you get drug addicts and drug dealers, but you start to follow the money, and you don’t know where the fuck it’s gonna take you.”

As below, so above. As The Wire’s first season builds to its anticlimax — McNulty, Daniels, Freamon and company bust Avon Barksdale and much of his gang, but on relatively penny-ante charges that leave his consigliere Stringer Bell free, and at the cost of lives and livelihoods on both sides — it repeatedly reveals surprising new depths. The crime and corruption are bigger, the cost sadder, the cops and criminals alike more complex than anyone had any reason to suspect. But it also functions exactly as a great cop show should, delivering top-notch genre-based suspense and barreling forward from plot point to plot point with the narrative inevitability of a freight train. It epitomizes the very form of storytelling it subverts.

The pivotal episode is titled, appropriately enough, “Lessons,” and it says a lot about The Wire’s long-term confidence that it doesn’t come until the eighth of its thirteen first-season hours. First, the Barksdale detail pulls over a bagman for what they expect to be a re-up, only to realize he’s the driver for a state senator, picking up tens of thousands of drug-money dollars in undeclared campaign contributions. It’s a genuine shock, only slightly mitigated by the fact that the actor playing the driver is Ashy Larry from Chappelle’s Show: What seemed like a simple, if remarkably well-executed, cops-vs.-gangsters story takes a sudden left turn into political intrigue. But we’re barely given time to wrap our minds around this new reality when another one intervenes. Deputy Burrell, defending his all-important political connection to the state senator in question — Clay Davis, who will become a top-tier black-comedy villain on the show faster than you (or he, anyway) can say sheeeeeit — orders the incredulous cops to give the money back. You can catch some asshole with a rap sheet long as your proverbial arm collecting banded cash in a Hefty bag from a known drug lieutenant, but as long as he was bringing the money to the right stuffed suit, he keeps his cash and walks? Something is rotten in Maryland.

But it’s not just the nature of the criminality the cops are facing that “Lessons” teaches us, but the nature of one of the key criminals himself. Using intel gathered by his elementary-school-aged sons during a “spy game” that surely earns him Father of the Year honors, McNulty tails Stringer Bell to an economics class in the local community college, where he learns about the elasticity of demand and appears to be a prize pupil. Later, after Omar executes Barksdale goon Stinkum in retaliation for the murder of his boyfriend Brandon, String is the voice of caution, urging Avon to call a truce despite the potential damage to the crew’s reputation. He’s only suggesting it as a ruse to lull Omar into a false sense of security, but suggesting it at all is an affront to Avon’s sense of honor — and a vital insight into Stringer’s character. String is, or wants to be, a businessman, not a warlord. He’s certainly not averse to violence — by season’s end we’ve watched him directly order upwards of half a dozen deaths — but it’s always a matter of silencing a witness, shutting down a snitch, eliminating a threat to the smooth operation of the enterprise. Of the Seven Deadlies, it’s not the Wrath or Pride or Envy of either Avon or the low-rise hoppers that motivate him, it’s good old-fashioned American capitalistic Greed.

Yet even as The Wire expands its scope and complicates its antagonist, it remains a crackerjack police procedural, and the key episode in this regard is “The Hunt.” The Wire’s usual storytelling mode is ruthlessly serialized: Each episode simply follows the show’s many storylines until an hour of airtime is filled, then stops. “The Hunt” is unique in that, from start to finish, it’s “about” a single thing: the aftermath of Kima’s shooting during a Barksdale buy-and-bust gone bad. We watch the detectives search for clues at the crime scene and follow their leads outward. We visit the hospital to learn of Kima’s condition and see how the brass, her peers, and her girlfriend handle both the shooting and each other. We see lawyers and judges react, working the system to get both the cops and the criminals the resources they need. We go inside the Barksdale organization as Avon and Stringer batten down the hatches and cast dead weight over the side in anticipation of the storm to come. And we watch politics and public relations trump good policework, as the Commissioner orders dope-on-the-table theatrics that force Daniels and the rest of the detail to raid Avon’s main stash instead of spying on it. It’s five separate TV-procedural subgenres in a single episode.

And it still finds time to do stunning character work. Major Rawls, the martinet in charge of Homicide whose “clear cases at all costs” approach to murder is more janitorial than investigative, is a godsend at the site of the shooting, bringing order to the chaos and even reassuring McNulty that Kima’s shooting wasn’t his fault. McNulty himself is shown to be so profoundly guilt-ridden and horrified by what happened to his colleague and friend that the wire recording of the final moments before the shooting make him vomit. On the criminal side of the ledger, D’Angelo is so cowed by his life in the game that he takes a ride with Avon’s main enforcer Wee-Bey despite believing, the entire time, that both he and Bey know full well that Bey will shoot him at the end of the trip. And Bey? The guy loves his pet fish. “They ain’t no problems, just beautiful as hell, D.”

That’s The Wire for you: a narrative as tight and efficient as anything in episodic television, made to feel organic and surprising at the same time. Look at Santangelo’s storyline in episode seven, “One Arrest,” for example. Sanny’s a minor character, a member of the Barksdale detail who Rawls is forcing to rat on McNulty. When he balks, Rawls orders him to either get over it and fuck over McNulty, or clear a cold case instead. When jovial Jay Landsman sends Santangelo to a psychic for help as a prank, not realizing the stakes, it looks as though his inevitable failure will force him to betray McNulty after all. But meanwhile, McNulty and Bunk are working another one of Santangelo’s cold cases that got hot through a tip from Omar tying it to Barksdale. When they solve it, Santangelo is so grateful that he betrays Rawls to McNulty instead of the other way around. The show took a fistful of random pieces, put them together, and made them run like clockwork, the degree of difficulty keeping it from feeling forced or cheap. A similar thing happens later in the season, when Kima’s shooting sets off not only the array of procedurals listed above, but events as wide-ranging as Bubbles’ relapse (Kima can no longer help him stay clean and McNulty’s too busy to notice he needs the help at all) and Wallace’s execution (Daniels forgets to have the kid picked up from his grandma’s country house in the confusion, leading him to catch a ride back to the Pit just in time to put himself in Stringer’s crosshairs for looking weak in a crisis). The dominoes fall so swiftly and in so many directions you hardly notice the finger pushing them.

But the real magic happens when the forward momentum slows to a crawl. It doesn’t happen more than once or twice, but when it does, wow. The first comes during one of the season’s many beautifully choreographed car-chase sequences, this one a slow-speed affair as the detail attempts to tail Barksdale away from his annual East Side vs. West Side basketball game. It comes down to Barksdale and Daniels, rolling past each other in opposite directions with the windows down, Daniels’s fierce eyes filling with fury as Barksdale rides by in slow motion, wagging his finger to make an eerily silent statement: “No.” Actor Wood Harris’s leonine good looks and easy-going demeanor usually make Avon a relatively unimposing archvilliain; here he’s transformed into a figure of genuine menace, as if even looking at him is dangerous. (The slow-mo shot of Avon is repeated to diminished but still powerful effect at his sentencing in the final episode, with McNulty in Daniels’ place.) It’s a standout scene in a series that rarely makes room for the ineffable.

The other highlight — of the season, of the show, of the New Golden Age of Television — arrests the momentum by asking the same question, over and over, without hope of an answer: “Where’s Wallace?” D’Angelo, set up in the first episode as the counterpoint to McNulty, has reached the end of the line, jailed for a hastily arranged pick-up from Avon’s New York connection and haunted by the murder of the kid who once played with an action figure while working in the Pit. Sure, he could be a good soldier, cop a plea, maybe even get released, but for what? To serve the men who ordered the execution of a child for being too soft? D’Angelo’s asking a question he already knows the answer to, though the timing and ferocity of the questioning shock not just Stringer, but D’Angelo himself. There’s no better, sadder example of how The Wire satisfies your every expectation while doing the last thing you expect. 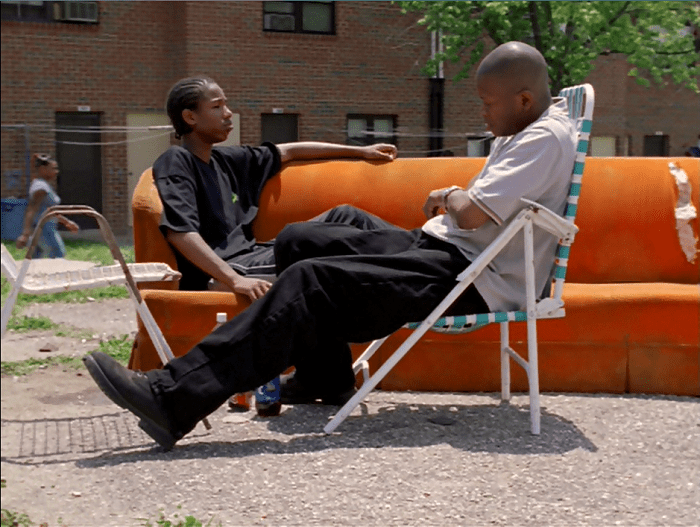