The weeklong social spree leading up to Thanksgiving was more than most could tolerate, joviality-wise. By the time Shindigger sailed into The Plaza for Save the Children’s second annual Illumination Gala, which this year honored Ben Affleck, Tony Blair and others, ennui had set in on a grand scale.

“Do these tearjerker video montages ever end?” one patron grumbled to a neighboring table.

“Just keep drinking,” came a sharp whisper from a fleshy gentleman nearby.

Trisha Yearwood crooned two songs from her new album, then bolted directly to a plane.

“She looks great, but I wouldn’t touch that Southern shit with a 10-foot pole,” an emaciated NYC demoiselle hissed within earshot.

“I’m gonna just go home,” Dakota Fanning sighed, “I was really excited to be a part of it…” she trailed off before tiptoeing away in her Zac Posen dress. Before moving on, Shindigger sauntered over to Ms. Garner.

“This is the only gala event that I go to in New York,” she revealed. “I spent a lot of time with the board members,” the actress confessed. “I’ll probably have a glass of wine with my ladies now.”

At the American Museum of Natural History gala, Bruno Mars thrilled an eager crowd at the Milstein Hall of Ocean Life. Beforehand, at the cocktail hour, Orange is the New Black’s Laura Prepon somehow finagled her way to the roped off dioramas of the Western beasts. Whatever she saw left her mute at our dinner table, since she wouldn’t talk between bites of her grilled vegetables.

Deborah Roberts and Al Roker along with Peggy Siegal helped ease the silence cast by Ms. Prepon’s lack of chat.

The the rest of the stars were on their best behavior, all anticipating Mr. Mars who took the stage post-auction.

“This chicken pot pie feels like home,” Mr. Meyers enthused, speaking of poultry. “Where as everything else in this room does not feel like home,” he smirked with a doubtful glance at the massive blue whale mounted above. “Nature and I don’t get a long,” he continued.

“Oh my god I love him!” Mr. Meyers melted with gusto on the topic of Bruno Mars. “He was on SNL, he’s just a jack of all trades. I can’t wait to see him again.”

In another corner by the stage, Derek Blasberg and Claire Bernard were plotting where to take the party next with an entourage of models. “It’s a Thursday, we’re debating whether to be responsible or not,” they reported to Shindigger in unison.

“What’s that song by him that I like?” he said leaning over to his wife. “Track four?”

“Oh, ya ya ya!” Kelly Tisdale sang back. Mr. Myers tried to sing along, but Shindigger couldn’t tell if it was “Treasure” or “Locked Out of Heaven.”

We’ll let the pop star do the singing. 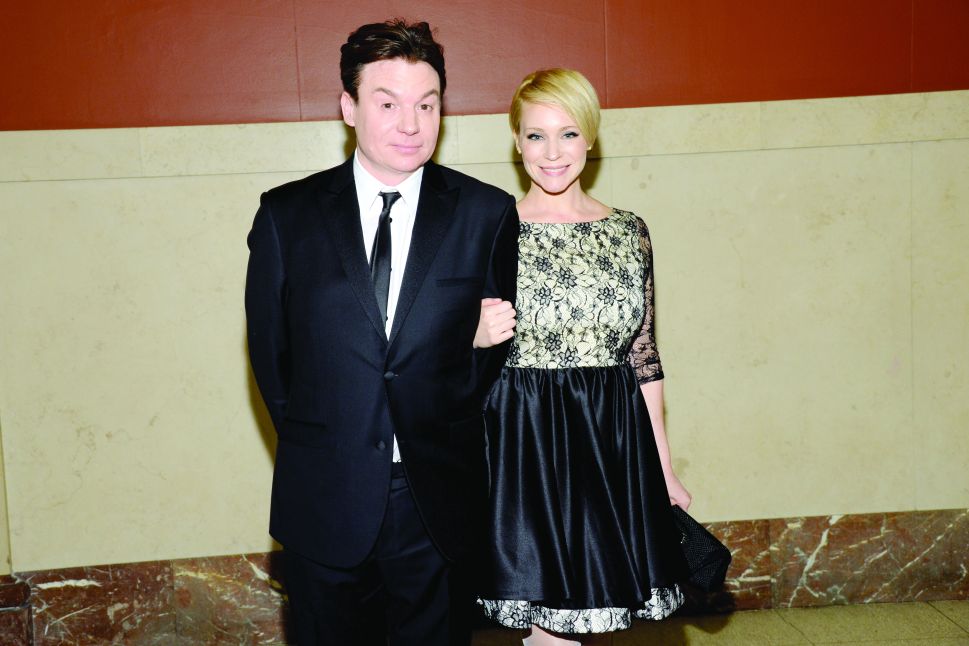