Here’s the recipe. Start with eight chefs, divide in half. From each of your two groups of four, select two unlucky chefs to have responsibilities. Drop one into the chaotic, hot oil of a deep fryer: this is your executive chef. Place the other under the unrelenting fire of the broiler: this is your front-of-the-house chef. Set the remaining chefs aside at room temperature, as they will do basically nothing. Serve.

As usual, Restaurant Wars comes down to the power positions: front-of-the-house, the person who coordinates the servers and is in charge of the experience, and executive chef, the person who runs the kitchen.

But we’re getting ahead of ourselves.

Our eight remaining chefs draw knives and we wind up with our teams. The grey team: Adam, Doug, Melissa, Mei. The orange team: Katie, Keriann, Katsuji, Gregory. Now, it would seem like the teams are pretty comparable—the orange team might have the edge here on talent here. Gregory emerged early as the guy to beat and as of late Katsuji has been on top.

And yet, almost immediately, the orange team starts to crash and burn. And that key to Restaurant Wars—the idea that the only thing that matters is the executive chef and the front-of-house manager—is what turns what should be a close contest into an utter blow-out. Keriann is picked to handle front-of-the-house. Katie is picked to be executive chef.

What happens when you take arguably the weakest chefs of the show and put them in charge of one team? That team loses.

If their first bad decision is the choice of executive chef and manager, their second bad choice is their “theme,” which is global food (note: that is not actually a theme). They make this decision immediately after being warned to keep it simple. This is a challenge about a restaurant concept. Cooking all different stuff is not a concept. It is not a theme. It is not keeping things simple. It doesn’t work, even if you try to make it work by calling your restaurant Magellan because, um, he got spices from all over?

Then it gets worse. Keriann’s managing is so bad that the judges are kept waiting for a table long enough that Tom Colicchio pretends to be the hostess. Service for the judges is OK, but for everyone else, yikes. People get the same dish three times, wait forever for other dishes, just a total cluster that neither Katie nor Keriann, the only two people who could fix it, are capable of fixing.

After all that, the OK food takes an ugly turn at dessert, with a dish from—you guess it—Keriann. She’s left Katsuji to execute her vanilla banana cherry crepe thing. Katsuji, who spends the entire episode squandering all the goofy goodwill he has earned by being extremely catty the entire episode, discovers that Keriann’s pre-made mousse is too thick to spread on her too dry pre-made crepe. So Katie, forced into finally making a decision and being in charge, makes a bad one, warming the dish, which doesn’t really make it a ton better. The judges hate the dessert. In fact, it makes them angry.

In a kitchen likely located in another universe light years away, there’s the gray team.

Despite an editing fakeout that makes you think Adam is going to have his dish ruined by missing clams, the gray team works together beautifully. Adam loses some clam shells for his baked clams, but it’s cool, Doug made sure they got extras, so he talks Adam down and they recover. They all work beautifully together, Adam hamming it up on the floor, Doug hamming it up with a super delicious pork dish (see what I did there, with the ham?). Our less brave chefs, Melissa and Mei, hang out in the background. Their dishes are fine, Melissa’s is too salty, but whatever. They’re safe because their executive chef and front of house made things work.

Did they think it was unwise to have such a broad theme? Keriann: “It did occur to me but ultimately I wanted the chefs to be comfortable with the dishes they were making.” Katie, whose problem this really should be, is mostly quiet…like she was in the kitchen.

“Katie was in over her head tonight,” Gail Simmons, everyone’s favorite judge who is way better than the absent Richard Blais, says.

But even so, it’s Keriann who goes home, due to her “disorganized service” and food that was the “worst dish on the team.”

“I’m disappointed that I’m going out for front of the house, but it’s just not what I do,” she says. “I shouldn’t trust my dish with people who obviously didn’t respect my food.”

But never fear, Keriann. After a predictable ending to Restaurant Wars, Top Chef is trying to shake it up next week—sudden death eliminations! A chance to immediately rejoin the contest by cooking! A longer version of that process with Last Chance Kitchen! Let’s hope it won’t be as formulaic as Restaurant Wars. 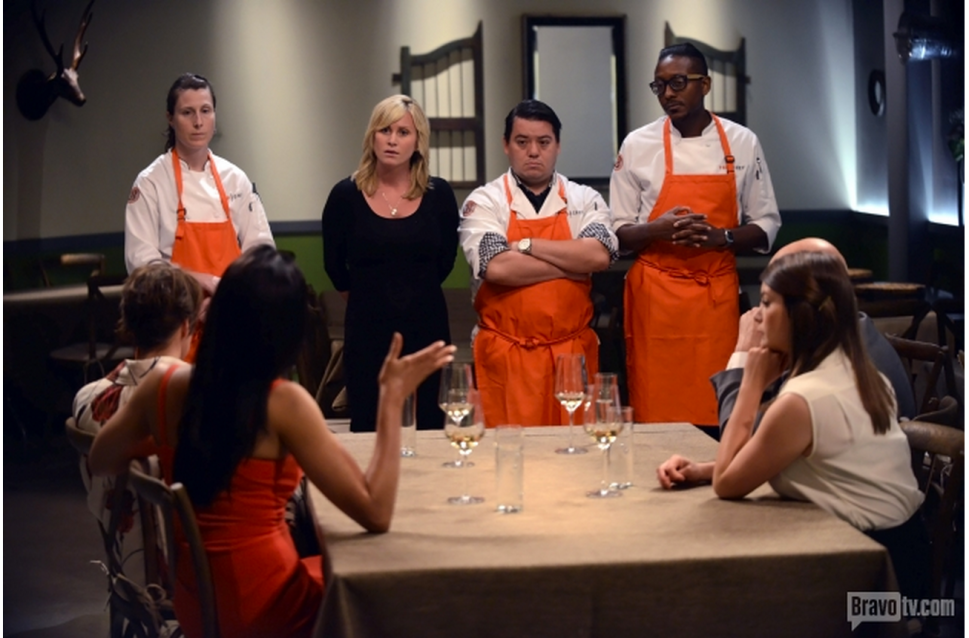