“Ever since I first walked into The Armory I’ve always thought it would be great to piss all over the place,” the Turner Prize-winning Scottish artist Douglas Gordon said this afternoon with a bad boy twinkle in his eye about his new -based performance project opening tomorrow. The grey-bearded Gordon, 48, with his tatted forearms, black rimmed janitor specs and heavy silver chain around his neck totally looked like an aging Williamsburg hipmeister deluxe.

He was pretty chill considering that  he was about thirty hours away from the first performance of tears become…streams become, his new site-specific collaboration with French classical pianist Hélène Grimaud taking place in the vast, 55,000 square foot Wade Thompson Drill Hall of The Park Avenue Armory.

At a press event today, Grimaud, dressed in a white track suit that made her look like some vision of Speed Racer’s fantasy cool French girlfriend, her face flushed with intensity, played examples of some of the event’s music by Debussy, Ravel and Liszt on one of two Steinways. Gordon has effectively turned the pianos into musical islands with Grimaud as a single marooned musician. He’s flooded the floor of the Drill Hall with two inches of over black tiling, creating a huge, mysterious reflecting pond surface with the audience in a single row of chairs around the perimeter.

The idea, noted Grimaud, is based in “the belief that the emotional journey could be magnified in an exponential way” by creating a kind of humungous echo chamber. “To illuminate through darkness,” Gordon added.

Ms. Grimaud, 45, has said that she experiences synesthesia, the neurological phenomenon where one sensory experience is simultaneously triggering of another; in her case, “hearing” music as colors. Gordon was in fact still tinkering with lighting cues while the press was there today and wryly disclosed that “Three days ago we were using color.” But decided upon just white lighting. “Monochromatic!” enthused Gordon.

“It’s messed with my orientation,” said Grimaud of the collaboration with Gordon that has been two years in planning. When she finished her short musical program with Gordon sitting at the piano bench beside her and “conducting” cues, he and she splashed across the the huge wet floor to the exit.

“I’ve never gone near ,” said Gordon in the Gilded Age comfort of the recently renovated Board of Officers Room for the press luncheon. “I’m not a very good swimmer.” 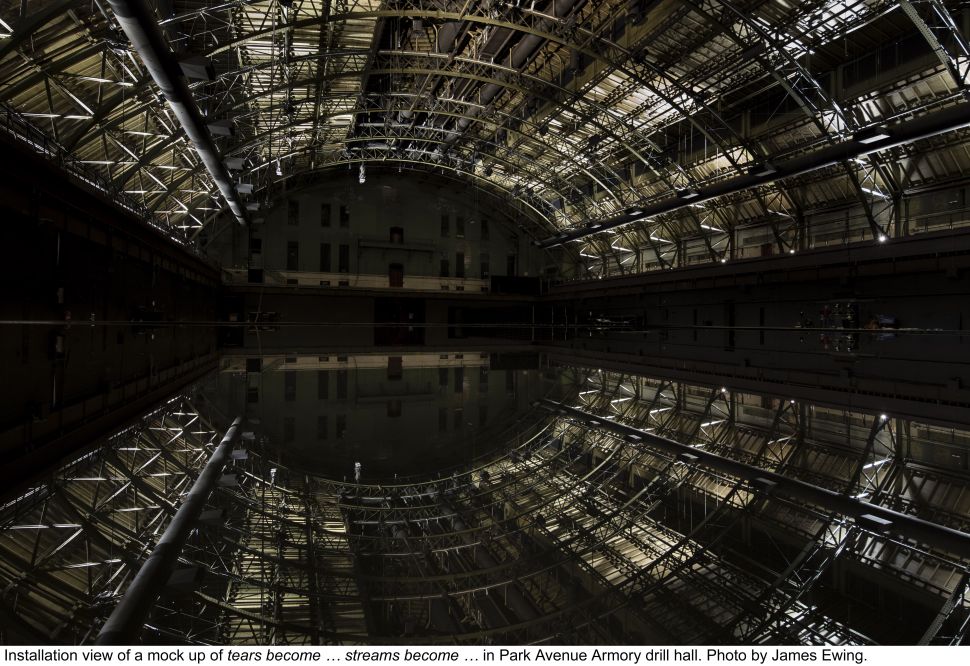