The United Federation of Teachers is hoping to end tax breaks for absentee landlords in New York City and use the potential windfall to slash class sizes in the five boroughs–though the union may lack the clout to push the proposal in the State Senate.

Speaking at the UFT’s headquarters in Manhattan this morning, Michael Mulgrew, the union’s president, said his goal would be to cap the size of classes at 15 students for kindergarten through third grade in the wake of Mayor Bill de Blasio’s aggressive prekindergarten expansion. Mr. Mulgrew proposed ending tax breaks for landlords who are not city residents, and spending the approximately $900 million the move would net the city on the classroom space and labor needed for such a class size reduction.

“What we are saying is that people who receive favorable tax treatment either through the assessment process or through different programs where tax breaks are given shall continue to receive them as long as they are a resident paying taxes to the City of New York,” Mr. Mulgrew said.

Mr. Mulgrew said the $900 million would be used to target 100 of the city’s “neediest” schools, though he did not specify which schools they would be or how long it would take for the potential program to be phased in. The goal, Mr. Mulgrew said, would be to have every student at the correct reading level by third grade. The average New York City third grade class had 26 students in the 2012-2013 school year, according to the UFT.

A UFT spokesman singled out the 421(a) tax exemption program as at least one controversial tax break that would, under the union’s proposal, only be applied to landlords who make their primary residence in the city.  A favorite of the real estate industry, 421(a) encourages development of underused or unused land by drastically reducing property taxes for a set amount of time.

Various perks that co-op and condo owners enjoy through the city’s byzantine assesment process—the property tax system has long been assailed by critics on the left and right—would also only be provided to New York City residents under the UFT plan, Mr. Mulgrew said. He emphasized he was not asking for a new tax, like a proposed pied-à-terre tax, which the Real Estate Board of New York, the real estate industry’s lobbying group, opposes.

Mr. Mulgrew’s proposed change in the city tax code would have to pass the state legislature, where the State Senate is controlled by Republicans. The New York State Union of Teachers spent heavily this fall in a failed effort to put the Democrats in the majority, angering the GOP, a reliable ally of the real estate industry. The UFT and Senate GOP have also tangled over charter schools, which the union loudly opposes.

This political reality did not seem to bother Mr. Mulgrew today.

“I will be working with the legislature, I will be lobbying on behalf of this—if you really want to work on a policy that will help children, this is it,” Mr. Mulgrew said. “We’re not asking for a new tax.”

A spokesman for the Senate GOP did not immediately return a request for comment. 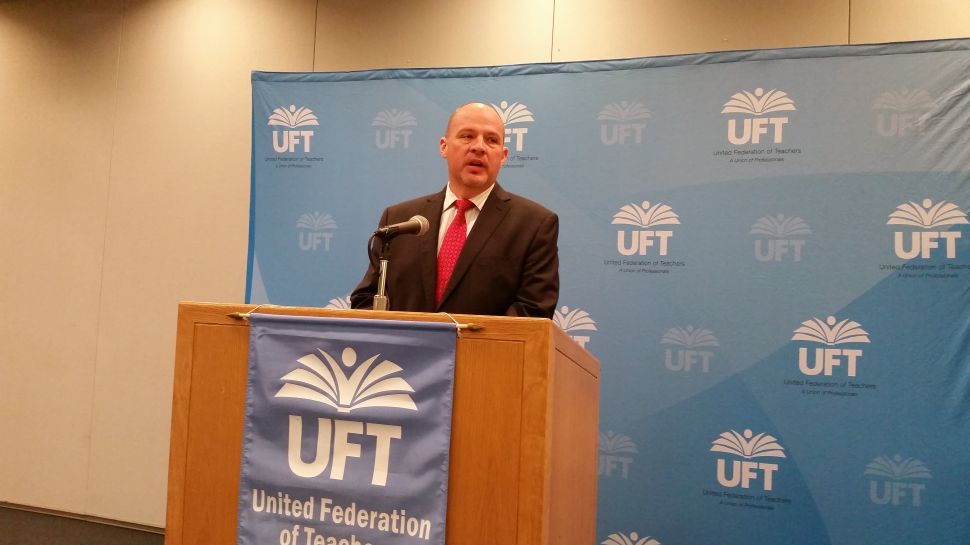