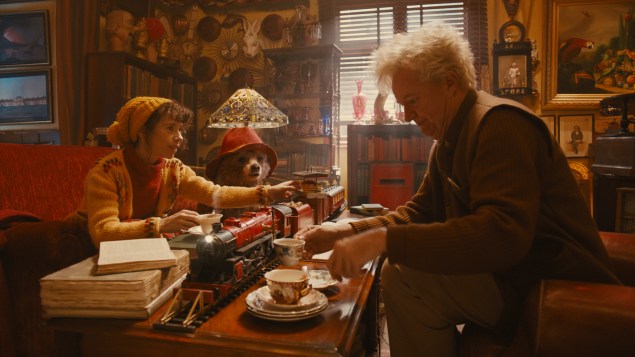 Paddington, that silly old bear, runs amok in London in this screen adaptation of the children’s book series.

Looking battered, chewed and hugged too tight by generations of slobbering tots, the beloved star of more than 35 million British children’s books since he made his first appearance in 1958 now waddles onto the big screen ready to enchant the children of the grownup children who once made him the pride of the nursery. Paddington Bear emerges unscathed and ready for more.

Affectionately written and directed by Paul King, Paddington is a harmless delight that blends live action with animated technology in the manner of Ted, but without the raunch. The misadventures begin with black and white newsreel footage of a British explorer visiting the wilds of Peru where he is befriended by a family of gentle bears to whom he introduces the magic and joy of marmalade. Leaving behind his hat and the promise to return their hospitality if they ever get to London, he returns home. Years later, having morphed into wide screen and Technicolor, little Paddington (voiced by sweet-sounding Ben Whishaw), his Uncle Pastuzo and Aunt Lucy (voiced by U.K. veterans Michael Gambon and Imelda Staunton) are hit by a tragic storm that leaves only little Paddington to face an uncertain future. Before she packs off to the retirement home for aging bears on assisted living, Aunt Lucy sends her orphaned nephew across the sea to London with a small valise, a box of her homemade orange marmalade and a note around his neck that says, “Please look after this bear—Thank You!” What follows are a series of rough and tumble encounters with life in London guaranteed to charm and delight children from 5 to 55 that raises family fare to a new level of entertainment value.

Less welcoming than he was promised, London is one gigantic culture clash that treats Paddington like an accident waiting to happen. Cheerful, confused and clumsy, the little bear gets lost before he even gets out of Paddington station, where he is rescued and named after the spot where he was found by the nice Brown family—endearingly played by Hugh Bonneville, Sally Hawkins and their two children, Madeleine Harris and Samuel Joslin. It’s captivating to watch Paddington grapple with his first English bathtub, battle the cold and clammy English weather with a Mary Poppins umbrella and attract a mob of police by innocently returning a wallet to a man who turns out to be a notorious pickpocket.

Paddington mixes enchanting toffee box sets with actual London locations while Paddington himself mixes with live people, pets and obstacles such as skateboards, double-decker buses, TV antennas, subways and the bustling crowds in Trafalgar Square. Nobody thinks there’s anything odd about a teddy bear three feet tall in a red explorer’s hat and green Loden coat with wooden buttons who speaks perfect English. “In London,” says Mrs. Brown, “everyone is different—so anyone can fit in.” This philosophy, clear-eyed and anxiety-free, dominates the movie and remains unshaken from start to finish. Of course 85 minutes is too long to sustain nothing beyond a series of comic pratfalls. Enter the villain, an evil taxidermist named Millicent from Britain’s Natural History Museum in the curvaceously toxic body of Nicole Kidman, deviously hatching plots to trap and ensnare this perfect specimen from the talking bear kingdom and lure Paddington into her dissection laboratory for her own evil purposes, with the Browns and their tipsy housekeeper Mrs. Bird (a deliciously eccentric Julie Walters) in hot pursuit to save him. In a feisty change of pace from her usual dramatic roles, Ms. Kidman sneers and creeps through the rainy alleys of London, overacting all over the place like Meryl Streep in Into the Woods. She seems to have a fine time of it, with a not-so-subtle nod to Cruella de Vil.

For some grownups, the feel-good kindergarten whimsy will wear out early, but there’s always the marvel of watching a great cast prance through sectional open-up sets like mechanical Hallmark cards. There are worse things to do in life than take your favorite child, leave cynicism behind, and surrender to the considerable charm of Paddington. 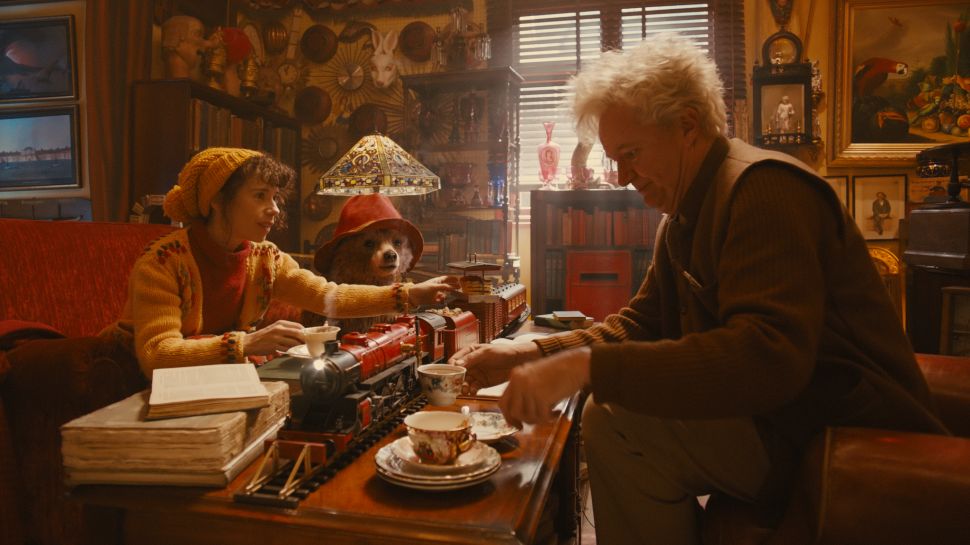