Vowing to reform a troubled criminal justice system and reverse yawning income inequality, Gov. Andrew Cuomo struck a far more populist note in his inaugural address this afternoon, adopting some of the rhetoric of critics he once dismissed.

Mr. Cuomo, speaking from a small stage on the 64th floor of the new 1 World Trade Center, said Americans were losing confidence in their economic and educational systems while questioning how justice is meted out in the wake of Eric Garner’s death last summer.

“We work harder and we earn less. Income inequality is at the highest point in over a century. While American capitalism never guaranteed success, it did guarantee opportunity,” Mr. Cuomo declared. “For too many, the dream of economic of mobility has been replaced with a nightmare of economic stagnation.”

Mr. Cuomo, reacting to the mass protests against police brutality that have convulsed the country since grand juries failed to indict police officers in the deaths of black men in Staten Island and Ferguson, Mo., argued that “today, sadly, too many people are questioning if the blindfold is still intact or does the justice system now see black and white or black and blue or rich and poor.”

“The world saw an African-American man in Staten Island die and people are confused, disgruntled and angry,” Mr. Cumo said, referring to the videotaped death of Garner. And in a nod to the murder of two NYPD officers in December, Mr. Cuomo also said police need more protection.

“Law enforcement officials have been wrongfully targeted and even assassinated,” he continued. “It must stop.”

In some ways Mr. Cuomo’s address, delivered to mark his inauguration after winning re-election last November, was a striking departure from remarks he has made in the past. The proudly centrist governor critiqued modern day capitalism in a manner more fitting for Mayor Bill de Blasio, the fellow Democrat and liberal who Mr. Cuomo sparred with in the mayor’s first year. He promised a minimum wage hike, acknowledging challenges the state’s political left has long howled at Mr. Cuomo for ignoring.

Mr. Cuomo made few other concrete promises, instead alluding to, in lofty terms, the core conflict between law enforcement and communities of color that the political establishment, police departments and a mass of activists have failed to resolve. He did not mention Attorney General Eric Schneiderman’s call for a special prosecutor to investigate all future instances of police actions that lead to civilian deaths.

“This is a New York City issue, it is a Buffalo issue, it is a Ferguson issue, a Los Angeles issue but it is also our responsibility to solve it in the State of New York,” he added.

On public education, Mr. Cuomo also hinted at great change, though it was not clear what exactly awaits the public school system this year. Mr. Cuomo is a fierce supporter of charter schools and an opponent of teachers unions, who resent the governor’s efforts to back educational ventures that don’t require stringent labor protections.

“Today we have two public educational systems if we want to tell the truth, one for the rich and one for the poor,” he said.

Held in a sleek, narrow event space with sweeping vistas of Manhattan, the inauguration was an abbreviated affair. No laser light show. No James Taylor.

Mr. Cuomo’s first term lieutenant governor, Robert Duffy, served as an understated master of ceremonies and the biggest celebrities in attendance were members of the governor’s family, Chris Cuomo and Sandra Lee, and the mayor of New York City. Mr. de Blasio’s own inauguration exactly one year ago was a very different sort of affair: an outdoor celebration of the new, progressive City Hall, two Clintons and Harry Belafonte looking on.

Mr. Cuomo’s re-election last year was not the triumphant march that many Cuomo loyalists imagined. Instead, Mr. Cuomo grappled with a scandal over his handling of an anti-corruption commission, failing to score resounding victories against his Democratic primary opponent, the little-known Zephyr Teachout, or his underfunded Republican challenger Rob Astorino. A much-ballyhooed memoir released weeks before Election Day sold hardly any copies.

But Mr. Cuomo still won and will enter his second term with plenty of clout. Mr. de Blasio will once more be reliant on the governor’s generosity and political will to implement his progressive agenda.

Many liberals have chafed at Mr. Cuomo’s centrism, his closeness to Wall Street and the charter school lobby. Good government groups resent his failure to reform the state’s porous campaign finance laws.

For the left-leaning critics of the governor’s first four years, Mr. Cuomo offered some words to assuage their fears. Still, many unanswered questions remain, for those on the left and right, about what the Democratic governor exactly has in store for 2015.

Mr. Cuomo spoke for more than twenty minutes and then departed the stage for a brief reception before heading to Buffalo for another inaugural address. His press office said he wouldn’t take questions from reporters. 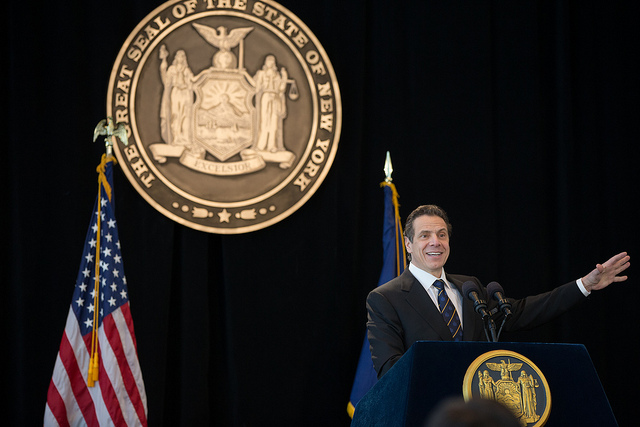