Maybe it’s because I’ve come to expect so little from mid-season American Horror Story that I finished this week’s episode as giddy as Dandy Mott finding a blood-soaked goose to serve gold eggs for Easter. And I’m not the person in the crowd who believes that adding Neil Patrick Harris to everything makes it 100 percent SPARKLE MAGIC, but the dude is definitely the closest we have to a Fixer for the show.

He comes on set, and everyone’s game is a little elevated. It’s like “You, Jimmy, with the army subplot, you’re out for a bit. So is your girlfriend. Dead weight. Then let’s get those twins front and center, and have them be a little kinky with each other. You know, like lesbians but even hotter because they are conjoined twins.” (Who, for once, are entirely bearable since they’ve given up their trademark character differences–dour dogmatism for Dot and a dangerously low IQ for Bette-and focused on their sister girl power.)
“And then let’s give me a really creepy doll. Like one that will bother audiences when we think about the implication of having a woman with Downs play a ventriloquist’s ‘dummy,’ named Marjorie.” (Though give it up to my girl Jamie Brewer, who has been in every great season of this show.)

I imagine that Neil Patrick Harris walked in and executed those commands, and Ryan Murphy and Brad Falchuk bowed their heads in shame and said “Yes sir, you obviously know much more about how to keep kitsch interesting past the novelty point than we do, sir.” And that’s how you get an episode like “Magical Thinking,” where traveling salesman Chester–he traffics in chameleons, in case that metaphor escaped–decides to buy Elsa Mars’ circus and become the main act, with his IRL girlfriend/wooden puppet doll, Marjorie. It was “Marjorie,” we found out, who turned alive and murdered the last girls who wanted to keep her out of the last threesome Chester was invited.

Now Bette and Dot want to use him to lose his virginity, and Chester is all excited…but where’s Marjorie? Somehow Dandy–skulking around nearby, because he literally has nothing else to do these days–was told by the cops of Chester’s ill-fated history with more than one lady, and he’s hidden Marjorie in the big top, so she can “come alive” and demand Chester murders the Tattler sisters.

Oh, and Dale gets shot in the head by Elsa, for murdering Ma Petite.

So in any other episode, this addition of a new character (or two) would be overkill. But NPH is bringing more to the table than just a conventional psychopath: he’s a war veteran with a metal plate in his head that might be the basis of his hallucinations about Marjorie, and he seems genuinely good-hearted, save for the monster doll trying to get him to murder people. But more importantly, he’s the kind of “freak on the inside” that is accepted by the side show, in stark contrast to Dandy, who for all his money and leverage, could never “buy” Miss Elsa’s Cabinets of Curiosities.

Is that what’s been keeping Dandy down the dark path of psychotic behavior this whole time? That he’s not welcome, even in the club of the “other?” Why should Chester win the affections of Dot, when he’s just this sniveling weirdo with a bunch of lizards and a couple of dollars?

Jamie Brewer)If the only thing that Dandy thinks separates himself from joining Elsa’s crew is the proof that murder is proof itself of a “freak” gene, then he’ll manipulate poor Chester to murder the twins. Then he can take the place of Chester, symbolically, just like he wanted to take Twisty’s place (symbolically), and to a lesser extent, his own mother’s. (He’s getting all their power from blood baths, remember?) Dot and Bette’s “doubleness” reflect his chameleon self: that he’s unable to change his nature, perhaps, but that he can present a false front that can pass in normal society. Chester has Marjorie, his dark double. An obvious reference to the infamous Twilight Zone episode, “The Dummy,” but with a feminine twist.
[youtube https://www.youtube.com/watch?v=PxlY9FlqR9Q&w=420&h=315] 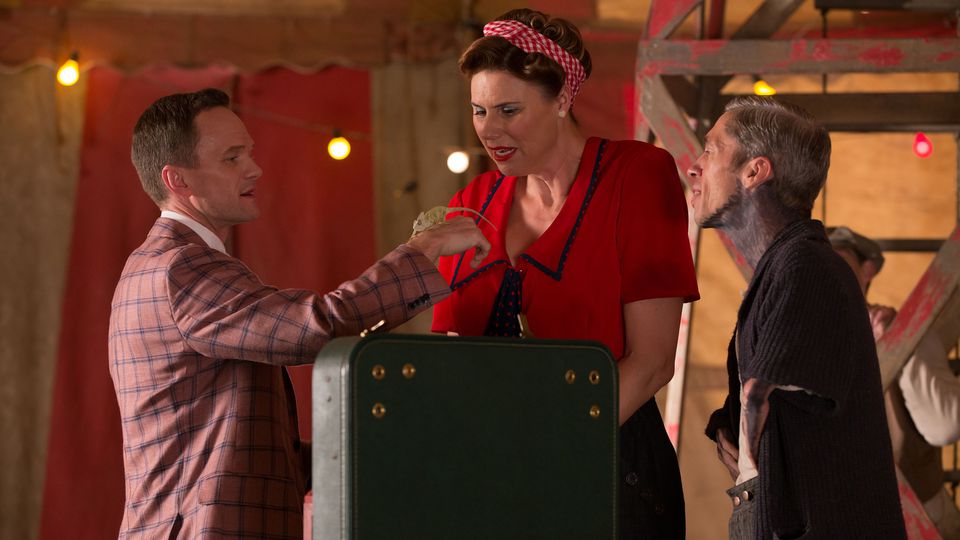