Can I tell you something that’s been bothering me for–oh, about a year or so– more than it should? What is up with the tumultuous collaboration/relationship of Evan Peters and Emma Roberts? Look, it’s not because I’m bitter that Eric Roberts daughter landed my precious, precious Tate Langdon. I’m over it. I barely ever think about it anymore, unless Adult World happens to still be on the DVR….oh look! What do you know.
[youtube https://www.youtube.com/watch?v=HtOsYUL6igc%5D
Emma Roberts’ turn as Hannah Horvath’s skinnier, shriller cousin in this film is really underrated.

What confuses me about these two ENGAGED CHILDREN (though come on…who gets engaged for a whole year? Something smells fishy!) has nothing to do with the time the Montreal police (mounties?) were called because of a domestic dispute where Roberts beat the shit out of her then boyfriend. (Only to have TMZ report on the resulting arrest , while Harvey Levin stood back aways, Canadian rain falling on his trench coat and fedora as he shook his Big Gulp slowly, asking to no one in particular who the fuck were these two again? Eric Roberts’ daughter? Jesus H. Christ.) I mean, sure, that was bad optics, what with the abuse and all that.

No, my real question for Ev’N’Em–a perfect celeb couple portmanteau, BTW– is why do they make each other WORSE actors when put in the same room. Every time they do a scene together, it’s so completely stilted and awkward. I have this image in my head, where anytime someone yells “CUT!” and snaps the clapboard, Peters noticeably flinches; his hands running protectively up to his perfect, cherubic face.

They are so bad at doing this together! At least last night my husband (Quicksilver) had the good fortune of only being in one scene with…whoever Roberts is supposed to be. (Did she really have the power to read fortunes? UNCLEAR! She was able to see Elsa’s backstory in her crystal ball, but the rest of her was SUPER shady. I mean, come on…throwing Stanley under the buss like that so he’d have to reenact the abridged version of Freaks?) But it was enough time for Evan’s character Jimmy No-More-Lobster-Claws to wail dramatically, “I HAVE NO HAAAAAANDS!” (As Danielle Henderson over at Cosmo correctly pointed out, it was a spot-on impression of Nic Cage from Moonstruck.)[youtube https://www.youtube.com/watch?v=C7yK8cuP1Bw&w=560&h=315%5D

Anyway, there’s not long to ponder these two clunky-ass lovebirds, because soon Maggie is called to the stage to perform in Chester’s totally normal SAW trick. Sorry buddy, you’re a couple decades too early to pitch that franchise.

Bye Maggie. And bye Stanley, who got “One of Us’d” by the freaks and some burly new employees that totally weren’t working there until this one scene. Also, RIP poor Oddities Museum woman, who just liked showing off cool shit that (she believed) died of natural causes.

And in case it wasn’t clear that the freaks are, uh, no longer the good guys on this show (although that’s always been debatable), their response to Chester’s gruesome public murder of Maggie was “Bitch had it coming.” That is literally what Desiree says, while Chester tries to invoke the mystical healing powers of “It’s magic…abracadabra!”

Poor, deranged Chester, unable to escape the claws of his terrifying Jeff Dunham alter-eggo, accidentally killed Eric Roberts‘ daughter either because he’s nuts or because his magic trick SUCKED. In any case, that means he is no longer fit to run the circus full of…other violent murderers? I guess technically Chester opted out of his contract by showing up at the police station to report a dead body, but it’s just his doll, which he stabbed repeatably. Question: can you go to jail for mutilating puppets? Really? Before 2016’s Puppets Right Act and everything?

Sorry twins, looks like all your boyfriends are cray. Speaking of: Dandy is back, and ready to accept defeat graciously. Haha, absolutely not: Dandy hired a private investigator to tail Chester, and discovered that he is a crazy murder. Which, obviously, causes Dot and Bette to run and warn Elsa that the rest of the freaks plan on killing her.

Yeah, I’m not really sure how that works, either. Again: ALL OF THESE MOTHERFUCKERS ARE MURDERERS.

Though I guess Dandy, with his serial killing spree, is now the BEST murderer of the bunch. Which is why…yay! Now he’s the head of the side show! He bought Elsa out. Guess she doesn’t give a f*ck about those “monster children” she claimed to adore merely weeks ago. It’s actually perfect for Dandy, since he always wanted to be part of something, but only wants things his way. Now he’s a boss!

Jimmy gets lobster claws from the German woodworker who made Elsa’s legs, so now he can go back to being a freak. But like, a Lady Gaga freak. One who wears his freak flag fly. I’m hoping the crest is just a delicious, quarter pound shell.

I liked the callback to James Cromwell’s Nazi character, Dr. Arden, who we now know sawed off Elsa’s legs. You know it’s him because the actor who played the young Dr. Arden is the man you see in the flashbacks this week. Dude is also Cromwell’s son IRL, which is why they look exactly alike.

It turns out Stanley isn’t dead. He’s just been Meep-ified for killing all those innocent freaks. Unlike Chester, who was just shrugged off after exposing the world to what Eric Robert’s Pretty Woman looked like with her guts out.

So, yeah, if you are reading this for the first time: a lot of weird shit happened and ten percent of it made any sense whatsoever. That’s when you KNOW American Horror Story has hit it’s stride again. 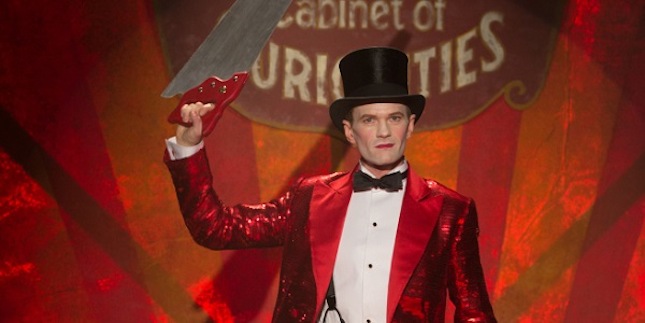