In a 23-page decision, Judges Ellen L. Koblitz, Amy O’Connor, and Clarkson S. Fisher, Jr., also reaffirmed a Superior Court ruling that use of campaign funds to offset criminal defense costs is not an ordinary and necessary expense of holding office.

The judges ordered that James be required to repay $86,504 to his campaign account, and that Johnson pay $7,500 in restitution because that money was used for her legal services. The judges modified the lower court’s order that both defendants were responsible for the full $94,004.

Also, the judges ordered the Superior Court to reconsider a $30,000 fine imposed at the request by the New Jersey Election Law Enforcement Commission (ELEC). The judges said the lower court must more fully consider “aggravating and mitigating factors” in deciding whether or not to approve ELEC’s proposed penalty.

The suit named as defendants Sharpe James; Cheryl Johnson, his treasurer; and the Election Fund of Sharpe James. It alleged that the defendants violated the New Jersey Campaign Contributions and Expenditures Reporting Act and breached their fiduciary duties to the contributors of James’ mayoral campaign.

The Complaint alleges that the campaign funds were expended by the defendants in connection with criminal investigations by the United States Attorney’s Office and the Attorney General’s office in New Jersey. James was indicted, and subsequently convicted in federal court on April 16, 2008.

Jeff Brindle, ELEC’s Executive Director, said he was pleased with the decision and appreciated the assistance of the Attorney General’s Office, particularly Deputy Attorneys General Janine Matton and Lindsay Puteska, and the work of former and current ELEC staff. 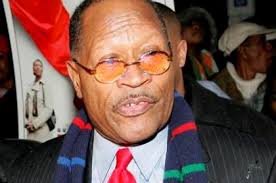