The Bronx Museum of the Arts and the National Museum of Fine Arts in Cuba will participate in the first major museum collaboration between the two countries in over 50 years. The Bronx Museum’s director Holly Block has been travelling to Cuba for two decades to follow artists and facilitate curatorial negotiations. For the exchange, over 80 artworks that date from the ’60s to the present will head to the National Museum from the Bronx’s permanent collection to be shown from May 21 through August 16, concurrently with the Havana Biennial. Then, in fall 2016, over 100 from the National Museum will be shown in the Bronx. Both exhibitions will be titled “Wild Noise.” [New York Times]

On Tuesday, the U.S. Supreme Court refused to review a legal ruling in the Norton Simon Museum’s case keep its prized Adam and Eve paintings by Lucas Cranach the Elder, which dates to the 1500s. Marei Von Shaer has brough a lawsuit against the museum that claims the paintings belong to her because they were loots by Nazi’s from her Dutch-Jewish art dealer father-in-law during the 1940s. The case will resume with preliminary proceedings for a federal judge in L.A. [L.A. Times]

Art enthusiasts in Mexico City went to great lengths to make sure they caught Yayoi Kusama’s Tamayo Museum exhibition “Infinite Obsession” during its closing weekend. The museum stayed open for 36 hours during the event and sold its last 800 tickets in four minutes. But those not lucky enough to get one stood in long lines with sleeping bags and tents and to get the last few available spots. Over 10,000 people visited during the marathon weekend. [Art Newspaper]

During the Denver Botanic Gardens’ exhibition of Dale Chihuly glass sculpture last summer, four people snuck in and stole three blown-glass spires and an orb. The works were valued together at over $100,000, and afraid of being caught, the thieves hid the works in a local cornfield. But they were caught after all; three of the spires were destroyed by the corn combine harvester, the suspects blamed the incident on drunkenness, and one man went so far as to say, “Not to mention those things aren’t bolted down, like at all.” [9 News]

Secretary of State John Kerry admitted during his remarks for the Art in Embassies Medal of Arts Award luncheon that he once dabbled in the arts. “I can tell you personally a long time ago, about the time of the discovery of fire, I had some aspirations to be an artist myself. I mean way back. As a kid, I played bass guitar in a rock-n’-roll band, and the best thing I could do to describe our sound was to say “loud.” But we had fun. And I fooled around when I was an undergraduate at college with filmmaking, and my images were too blurry and my pans were too fast, but boy did I have fun. And I finally discovered that what I really wanted to do was what I’m doing today,” he said, before honoring Maya Lin, Kehinde Wiley, Xu Bing, Mark Bradford, Sam Gilliam, Julie Mehretu, and Pedro Reyes. [U.S. Department of State]

Chilean President Michelle Bachelet confirmed funding to build Antoni Gaudi’s Gaudi Cultural and Spiritual Center in Rancagua—the only Gaudi-designed building outside Spain. The project dates to 1922 when the architect corresponded with a Franciscan friar who asked him to build a chapel for the South American country. [Arch Daily] 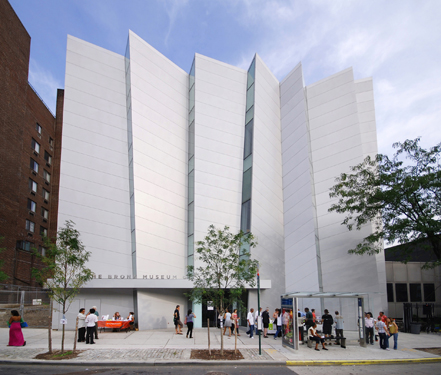