The DIA has reached its fundraising goal of $100 million. The funds were promised as part of Detroit’s grand bargain, the bankruptcy restructuring plan recently put in place to help pull the struggling city out of debt. DIA board chair Gene Gargaro reports that the current pledges actually total out to $90 million, but as many donors have ramped up their payment schedule the value ends up equaling out to $100 million. [Detroit Free Press]

Collector Alberto Mugrabi is selling his 2,729-square-foot apartment at 50 Gramercy Park North for $ 8 million. The three-bedroom apartment comes specially outfitted for the next art enthusiast to hang their collection on a “picture rail system for hanging art.” Mr. Mugrabi will be moving into two triplex units he purchased in Noho’s new Schumacher building. [Curbed NY]

The first big initiative for New York’s newly appointed Cultural Affairs commissioner Tom Finkelpearl will be to attempt to measure diversity within the city’s museums and performing arts organizations. There won’t be any mandates for hiring at the moment following results of the survey, which will be released later this year, and Mr. Finkelpearl says, “It’s about finding ways going forward to talk about how it could be more inclusive.” [Wall Street Journal]

Our friend Ben Davis has put together a list of “30 Art-Writing Clichés to Ditch in the New Year.” Of course, every art writer has been guilty of a few of them from time to time, like overuse of words like “challenges,” “deconstructs,” and “explores,” but the list is must-read for all writers, rookies and vets. [artnet News]

W Magazine’s “Best Performances” photo shoot, featuring 39 prominent actors from this year’s popular movies, is a wild one. Photographer Tim Walker has taken stars like Bradley Cooper (who graces the cover), Julianne Moore, and Shailene Woody, among others, and created a surreal spread that the magazine claims was inspired by art: “The photographer Tim Walker was influenced by the colorful, sun-drenched Los Angeles paintings and photographs of David Hockney, as well as the ’70s free-love aesthetic that informs the artist’s work. From there, the photographic scenarios took cues from Federico Fellini and, naturally, Walker’s own unique perspective.” [W Magazine via Jezebel]

In an article published this morning in the Guardian about stolen items in the National Gallery of Australia’s collection, author Joanna Mendelssohn compares art dealers to real estate agents when attempting to answer how the institution could have come to believe they were legitimate. “They both rely on a combination of desire and flattery to convince a potential purchaser that an acquisition is unique, a fulfillment of desire – made all the more urgent by the certain knowledge that others are also in the hunt,” she writes. [Guardian] 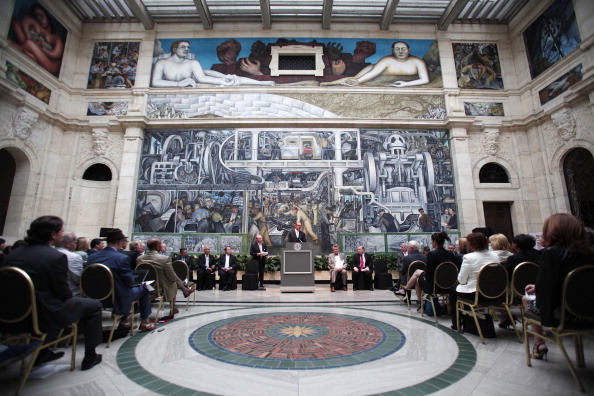