Relinquishing control is the central theme of London-based trio Troika’s “Cartography of Control.” It’s the first stateside show for the art and design collective formed by Conny Freyer, Eva Rucki and Sebastien Noel, who employ a distinctly scientific approach to their work. The eloquently heady exhibition, currently on view at Kohn Gallery’s 12,000-square-foot space in Hollywood, uses experimental procedures to question the really big stuff, like the laws of gravity or the path of least resistance. Though their work nods to mid-century mathematicians like Alan Turing and Einstein who were masters of prediction, Troika feel at ease leaving the outcome of their own experiments to fate.

In Hierophany (2014), the trio attempts to replicate computer randomization by hand, on a human scale, through a tapestry-like mosaic of approximately 21,000 hand-laid black and white dice, for which they followed simple repetitive rules to organize the composition. “If the previous row has three black dice in a row, I put a white die below them,” Ms. Freyer said told the Observer. What they found is that the dice began to self-organize; halfway through the dice formed a type of symmetry, and fell into an order that alternates between black and white stripes. Much like other works in the show, the piece demonstrates the unpredictable patterns governed by the scientific theory of emergence. What is that? Mr. Noel explained by saying, “What it really means is we don’t know where it comes from.”

Squaring the Circle (2013) is not what it appears: the suspended wire sculpture looks to be wrought into a perfectly drawn black circle. View it from another angle, however, and you’ll find that it’s also a square. This defiance of geometry (a sculptural sleight of hand) involves a hybrid shape of right-angled points and 180-degree curves, plus light reference to satirist Edwin Abbott’s 1884 short story Flatland, in which the denizens of a two-dimensional world reject the possibility of life in three dimensions.

Four pieces, two titled Path of Least Resistance (2013) and Cartography of Control (2014), were drawn using electricity. The artists painted onto the surface of fibrous paper treated with fire-retardant chemicals, and let a high-voltage jolt burn through at its own will. The grizzly scars on the paper form the shape of landmasses and island chains in a series of sepia-toned artist-designed maps.

And for the grand finale, in a separate gallery, LED-lit globular droplets of appear to float upwards from a silver spherical pot into a siphon in Testing Time (2014), seemingly defying gravity. (Here, rather than explain the artists’ methods, we’ll leave the mystery intact.)

The show’s “cartography” can best be seen in the physical (and figurative) paths produced by the group’s experiments; this is what happens when natural phenomena are given the opportunity to test the bounds of physics. For Troika, gravity, algorithms, geometry, and more, are proxies for questioning religion and other social orders. “What can you find at the end of a really controlled rational process?” posed Mr. Noel. Often what appears is not the logical conclusion. For Mr. Noel, “That’s part of the appeal.” 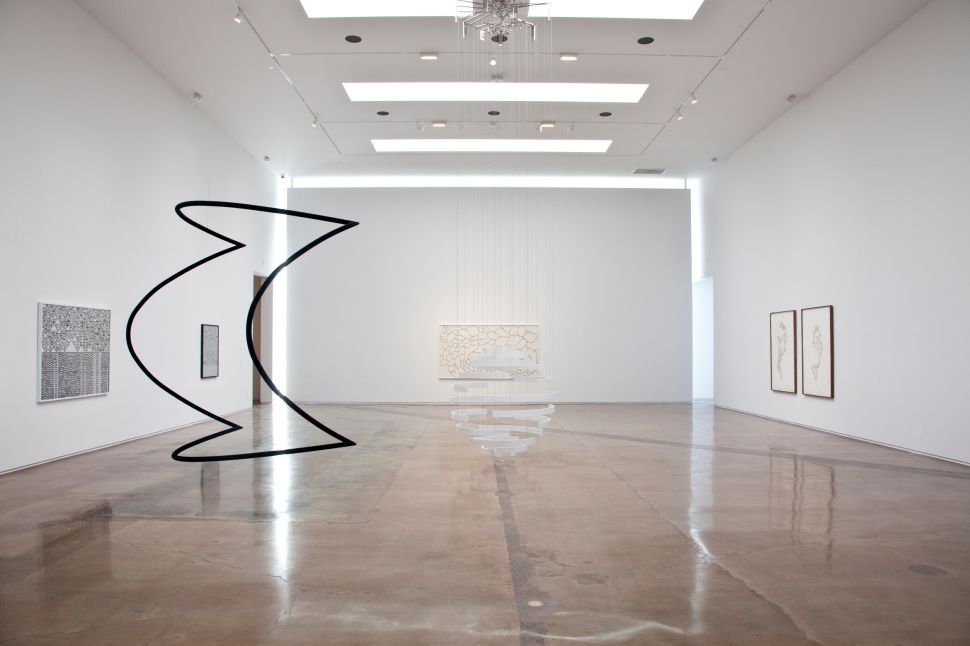