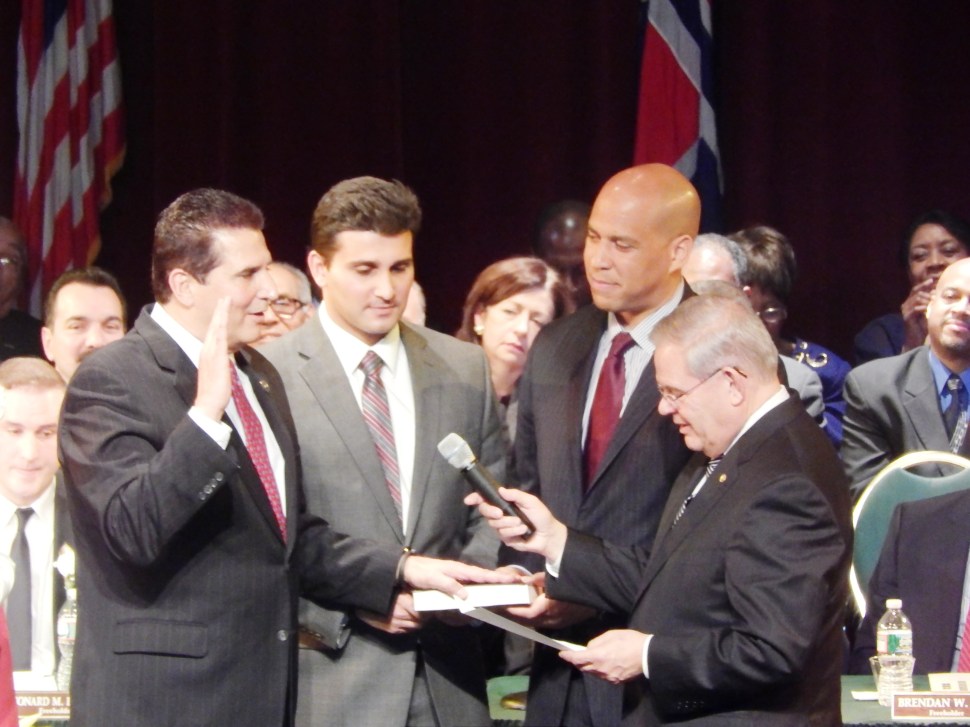 NEWARK – If theater inevitably permeated today’s Essex County government reorganization ceremony it was not Shakespeare, or even Christopher Marlowe, whose Doctor Faustus doomed to spiritual serfdom the title character on the substance of his decision-making. 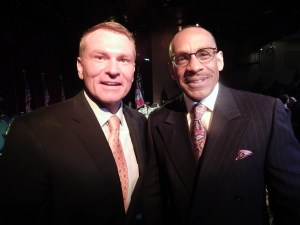 In this case, Essex County Executive Joe DiVincenzo – a leading New Jersey Democrat who in 2013 backed Republican Governor Chris Christie then turned around and ran unopposed in the 2014 Democratic Primary – appeared absolved for all time – or at least until 2016 and the coming portents of presidential politics – and 2017, where indeed, his ring of glory beckons all statewide players forth to kiss.

It’s Essex, the county with the most Democrats packed into its northern borders, and so important politically to put it mildly.

With most of the main political players from the state’s Democratic Party stable affectionately attentive, DiVIncenzo – who four years ago was sworn in by Christie amid much cross-the-aisle praise – once again delighted in the role of party ringmaster.

“We have got two right here in Essex County,” the executive added, triggering an uproar of handclapping and hand stretching in 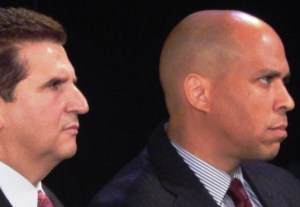 the direction of the two beaming personages seated onstage behind the exec: U.S. Senators Bob Menendez and Cory Booker, who had both sworn in the Essex pol.

DiVincenzo said he guaranteed Menendez’s name will be in the VP bloodstream.

In their tag team appearances at the mic, both U.S. Senators gamely shoveled superlatives on Joe D.

“They say if you want a friend in Washington to get a dog,” Booker gushed. “Joe – you have been a friend for me. You were there for me as a friend. You’re not about headlines or controversies. You helped me develop as a leader.”

Menendez – on the occasion of his birthday – likewise plucked the DiVincenzo harp.

The pair presented an American Flag to their countywide friend that had flown atop the U.S. Capitol, Menendez said.

Other narratives converged onstage, where DiVincenzo – whose county government numbers 3,500 – promised the unveiling in two weeks of a $51 million county budget surplus. 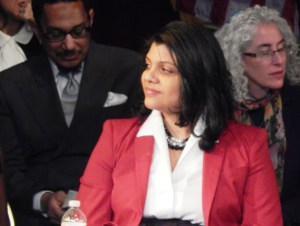 2017 gubernatorial politics hovered in the atmosphere, too, as Senate President Steve Sweeney (D-3) mounted the stage as an honored guest, prominently on display directly behind the freeholders and beside Hudson County’s Speaker Vincent Prieto (D-32).

“I go back with Joe a real long time,” said the ideally situated Sweeney. “Joe showed real leadership and made investments to actually improve the lives of people in this county.”

He received neither an invitation to the podium to address the packed house at Essex County Community College nor even a shout-out as Sweeney basked center-stage. Clearly, DiVincenzo and his handlers sought to avoid what occurred at last year’s East Orange reorganization ceremony, where Fulop muscled Sweeney by virtue of sharing the same amount of stage and speaking time.

Fulop backed Newark Mayor Ras Baraka in the 2014 mayor’s election, a political move that made him look fearlessly subversive at the time, but which at an occasion like this enhanced his own ability to appear like a background fixture.

Now he mouthed a word of goodwill for the sitting city executive, while leaving untouched Baraka’s Jersey City champion.

“Ras Baraka is out of town but he called to congratulate me,” DiVincenzo said. “He too is part of Essex County.”

Starting with the senators, everyone mentioned the names of those Democrats who died in 2014: among them Freeholder D. Bilal Beasley and former Democratic State Chairman Ray Durkin, father of Essex County Clerk Chris Durkin, who certified DiVincenzo and the freeholders. 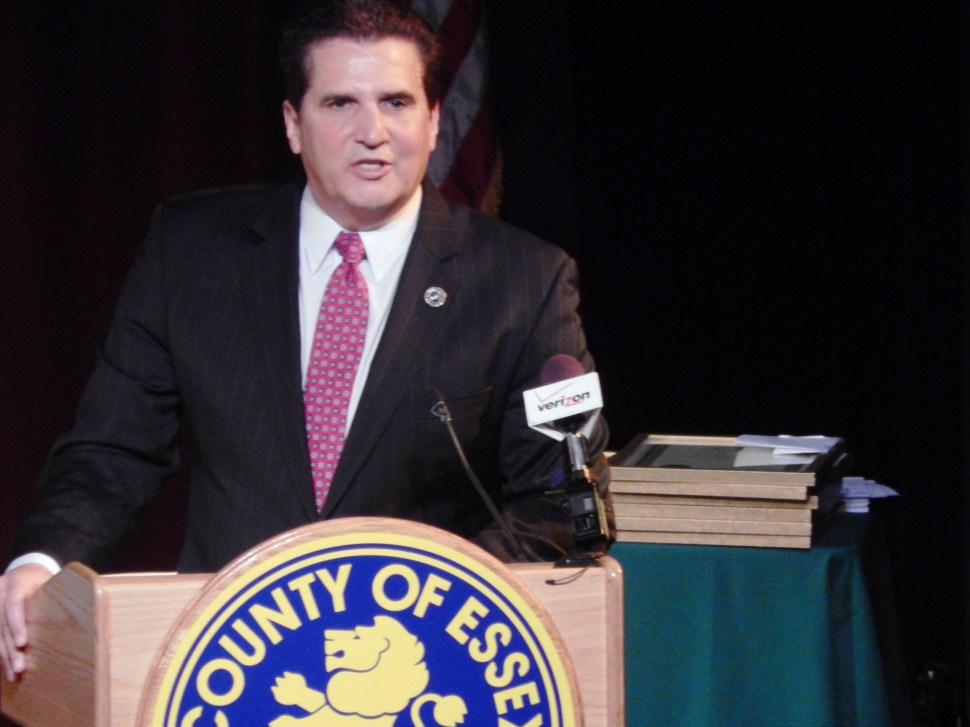 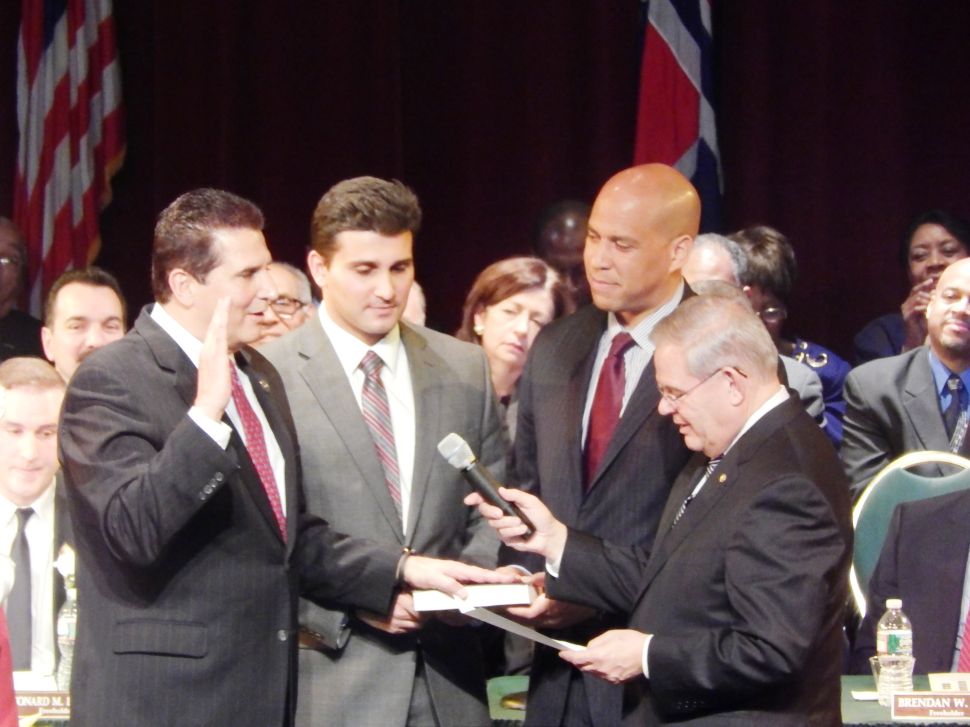