I hate to admit it, but lately I’ve been closing my tab every time I get to a headline about “original content.” It’s just too overwhelming. I’ll never have time to watch it all! Hell, I’m still catching up with the old content, and Amazon goes and unveils this shit? COME ON! I’M STILL NOT CAUGHT UP ON NEW GIRL! I’VE NEVER SEEN ORPHAN BLACK, AND YOU’RE TELLING ME I NEED TO MAKE ROOM IN MY RECEIVER TO WATCH HANK FROM BREAKING BAD PLAY BENJAMIN FRANKLIN?!?!?

Maybe we should all take a breather from creating amazing, incredible, complex shows…just for a month or two. Give the rest of us some time to catch up.

That being said, I still consider it my duty to inform you when there is a new show you absolutely HAVE to watch. And Babylon, which premiered on Sundance Channel two weeks ago, is one of those shows. Sorry, everybody. Add it to your queue. It’s like The Wire meets In the Loop meets The IT Crowd. (Because lord knows we can’t even explain concepts anymore without just pitching mashup ideas like we’re in the opening of The Player.)

Originally on Channel 4 in the UK, Babylon is about three separate factions of the Metropolitan police service, and divides it’s screen time fairly equally between the ground officers who respond to calls and are out stopping crime (Territorial Support Group), the members of Armed Response Unity (like a major case squad), and the bureaucratic/publicity division, which has just installed a new Director of Communications to give the British police an image makeover. Liz Garvey (the always amazing Brit Marling,) is a TED-talking American wunderkind who arrives in London to find herself already in over her head: her second-in-command is vengeful and underminey because he was passed over for Garvey’s job, the Police Commissioner Richard Miller (James Nesbitt) has good intentions but no ability to filter himself when talking to the press.

Oh, and there’s a documentary film crew that’s following everyone around, because of course there is.

And it’s only six episodes, because of course that’s how we make shows now. (Well, in Britain anyway.)

Did I mention Danny Boyle created the series and directed the pilot? Because OF COURSE HE DID.

(For you more advanced TV British comedy nerds, the names of the two head writers, Jesse Armstrong and Sam Bain, should sound familiar. They are at least partly responsible for the brilliance of Peep Show and That Mitchell and Webb Look.)

The pilot, incidentally, is a hilarious day of mixups and mayhem, capped off with a crazed sniper on a murder spree. Womp-womp, indeed.

The real beauty of the show is how it doesn’t make Garvey out to be some Bridget Jones wannabe with delusions of Silicon Valley. She might talk in internet terms, but she’s a steel flack with iron jaws and no mercy. Her pitches on how to raise public opinion of the police range from absurd to kind of brilliant and sometimes both at once. (In the second episode she proposes that the police should get corporate sponsors that could decorate their cars and their uniforms, like the deal race car drivers get.) Garvey does cocaine. Garvey doesn’t have her shit together. Garvey is the anti-McNulty: she’s all about the hierarchy, and trading in political favors of various sorts. (Plus, she has way better boobs.) She’s image and brand conscious, which should signal that she’s actually the bad guy in all this. But she’s not, because it’s more difficult than good versus bad. Isn’t it always?

Babylon is on Sundance at 10 pm on Thursday nights. Check your local blah blah blah for listings. 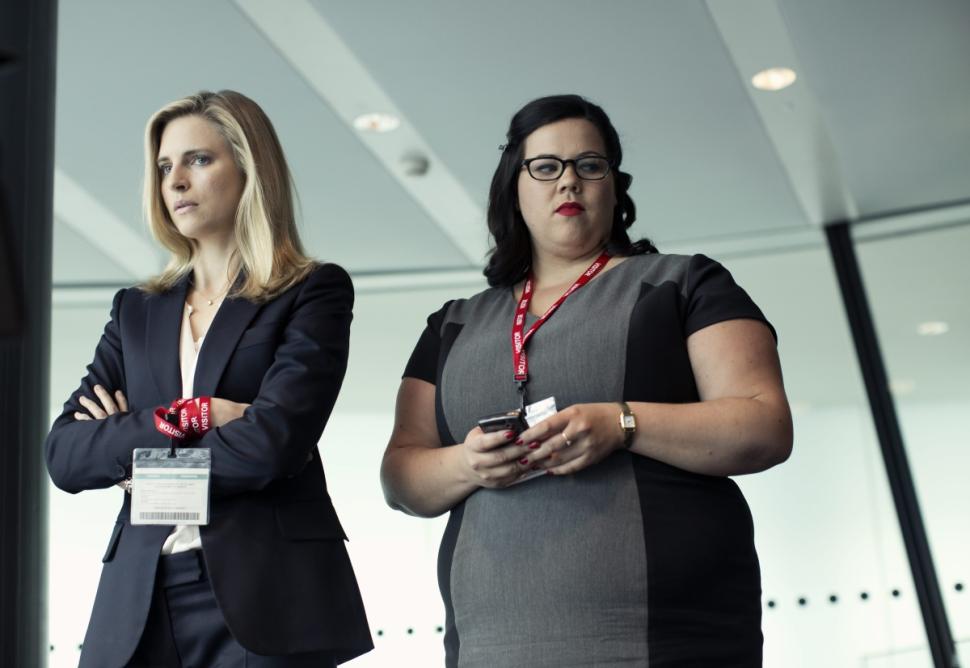