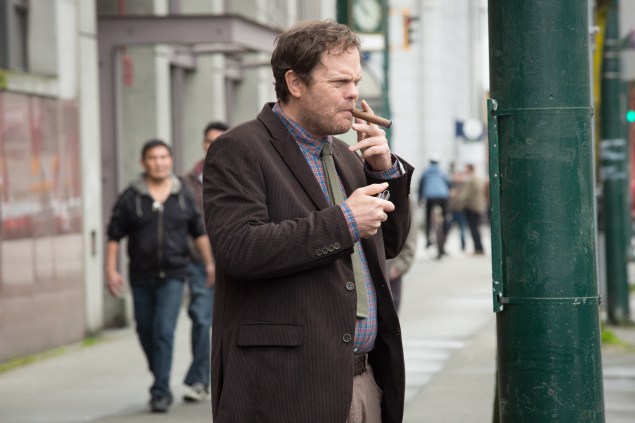 Making a new television show is hard. It’s even harder when you’ve essentially been canceled before you’ve even aired a single episode. That’s what makes the new Fox entity, Backstrom sort of remarkable from the get-go.

The show was developed and a pilot was shot with the CBS network at the helm, but then the network passed on the show in May 2013. Almost a year later, in January of 2014 Fox stepped in and ordered 13 episodes of the one hour long drama.

The series, starring Rainn Wilson as the title character, is based on Swedish criminologist and novelist Leif G.W. Persson’s hit series of books of the same name. The series centers on Detective Everett Backstrom (Wilson, a three-time Emmy Award-nominee): an offensive detective who tries, but fails, to change his self-destructive behavior. Backstrom leads the Serious Crimes Unit as they navigate Portland’s most sensitive cases.

Overseeing the show as Executive Producer is Hart Hanson, whose resume includes ten years on the hit forensics show, Bones. Hanson has been with the project since its earliest stages. “I have to say I was on about page 20 of the book when I said, ‘yes, I absolutely see a series here,” reveals Hanson.

Many viewers might decry this as just another cop show with an eccentric lead, to which Hanson offers a surprising response when he says, “I have no argument for them on that. The fact is, it’s a network show and there are certain storytelling constraints. So, I’d have to say, ‘yes you’re correct. It’s an hour long, standalone, network show.’ My job now is to, in spite of those constraints, try and make something entertaining and engaging and I’d say that we’ve done that really well here.”

Another issue that Hanson openly addresses is the comparison to a certain other Fox show that ran for several years on the network. “A few people have gently and sweetly said, ‘Is this just House as a cop?’ Well, I liked House very much. [House creator] David Shoe is a very good friend of mine and I’m nothing but flattered to be compared to House but now I’m going to lay some truth on you here about what I really had in mind for this show, what really inspired me to do it.” At this point Hanson takes just a quick breath and says, “What really prompted the desire in me to do this show was that when I was a little boy sitting on a couch watching TV with my dad and learning to enjoy what he enjoyed, it was all those 70s shows that had cantankerous men in the lead role – Mannix, Kojak, Baretta, McCloud and Columbo. I’ve been ready for people to say, ‘Are you just ripping off those shows?’ I say, let’s call it an homage and an update to those types of characters. So, maybe it’s a little bit House-like, but my true intention was to create something like those other shows that I saw years ago and for this show to give people the kind of feelings that I got when I was watching those.”

At this point Hanson admits that he and his star share a secret that he’s reluctant to reveal, but clearly he feels it’s time when he says, “I’m a big Norman Lear fan so I genuinely feel it’s a little bit too conceited to say that this show is ‘Archie Bunker as a cop,’ but Rainn and I say that too each other when no one’s listening because that’s what we’re really striving to be here – that politically incorrect guy that while he’s a blowhard and you don’t agree with everything he says, you can see where he’s coming from and you find deeper meaning in the point he’s trying to make.”

Once Hanson established his motif and started working with his cast, he was caught a bit off guard by some members of his cast. “First, I was incredibly stunned by how committed Rainn was to this show. CBS didn’t pick us up and we were waiting to see if Fox would pick us up and we were off for months and months and months. I just knew it my cynical heart that it wouldn’t happen because it never happens this way. Rainn was certain that it would move forward. He was absolutely certain. We talked a lot, almost every day and I would secretly be thinking, ‘Buddy, it’s time to move on,’ but damn, if he wasn’t right and I was wrong. It’s one of those times when I was ecstatic to be wrong.”

Another casting choice also had some unexpected results for Hanson. “While I totally jumped at the chance to get Dennis Haysbert, I’m ashamed to tell you that I had forgotten that he’s more than what I hired him for. I hired him for his moral rectitude and authority and his calmness and his ability to play a serious veteran cop, but I have to tell you that almost the first time I saw him acting with Rainn, I went, ‘Wow, Dennis is really funny! I cannot just make him just a straight man!’ So we immediately made adjustments so as to incorporate more of his humor.”

With regard to those viewers who feel they might harken back to Wilson as Dwight Schrute from The Office too often while watching Backstrom, Hanson offers this, “I will tell you that Rainn had that worry for a few days, and then it went away. It went away very quickly because he really absorbed himself into the character. I challenge you to watch just ten minutes of the show and then see if you’re thinking about Dwight. I think I’m pretty safe in saying that you won’t be.”

Overall, Hanson wants viewers to know that while Backstrom may have its procedural element, he says, “This series is really about redemption.” He goes on to explain his thought process by explaining, “If you believe, as I do, that there are two really important things in life – love and work – then this is the journey of this guy who’s been summoned from what’s a low point in his life to do important work with good people and believe me that changes him. I know that very often in network shows the assumption is that it’s a static or mostly static character in every episode but that just isn’t the case here. I’m really hoping that the audience comes along for this ride and invests in and that this will turn out to be a very, very, very long novel.” 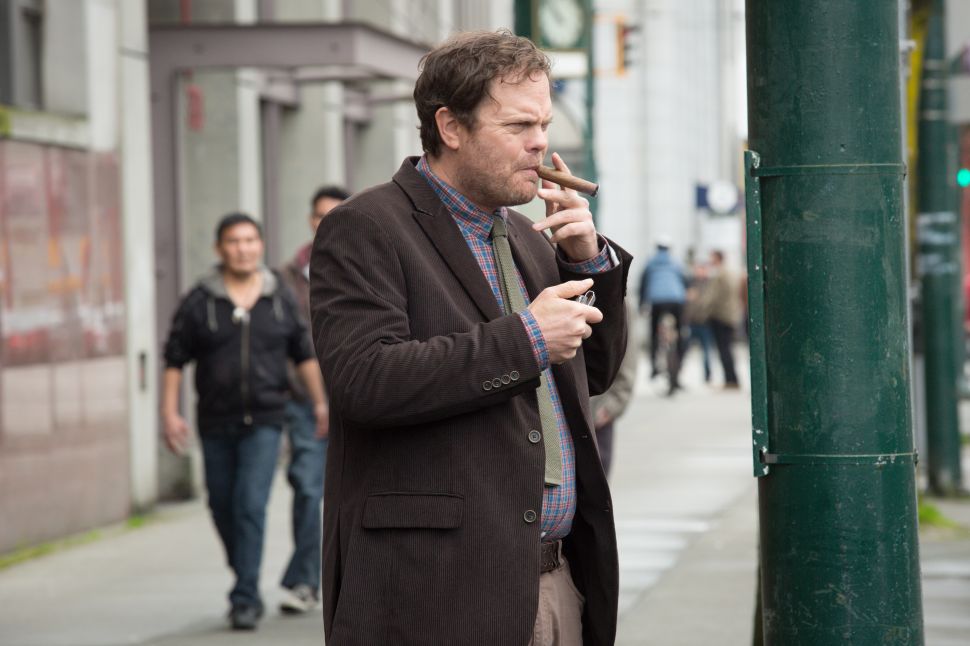