“[Essex County Democratic Party Chairman LeRoy Jones] and I have spoken about what’s going on, and I think we’re going to come to some agreement in the end,” said Baraka at a Wednesday night town hall meeting at the Azores Social and Sports Club in Newark’s Ironbound neighborhood. “We haven’t finalized everything, but I think we’re going to come to an agreement. I don’t think there’s going to be any real mess in our district at all.”

Kenney is a former Newark School Advisory Board member who now works in the office of Newark Deputy Mayor Rahaman Muhammad. Council is Newark’s director of neighborhood and recreational services and a past member of the School Advisory Board. Both Kenney and Council ran unsuccessfully last year for an at-large council seat.

This year’s Assembly races could also be a moment of both settling old scores and looking to the future for Baraka. Pintor Marin supported Baraka’s rival, Shavar Jeffries, in last year’s mayoral contest. Spencer, who was then Newark’s municipal prosecutor, stayed out of the mayoral battle.

But on Wednesday night, any 2014 strife seemed forgotten as Baraka remembered to mention the presence of Assemblywomen Pintor Marin and Spencer, who were applauded after they addressed the concerns of Ironbound residents about the opening of numerous hookah stores in the neighborhood.

The atmosphere amidst the more than 200 neighborhood residents present at the town hall meeting was at times raucous. But Baraka’s mood seemed to be one of a politician willing to bide his time.

“At the end of the day, if we can come to an agreement, that’s always the best thing to do. Nobody wants to have a fight,” Baraka said. “You only fight when there is something to fight about.” 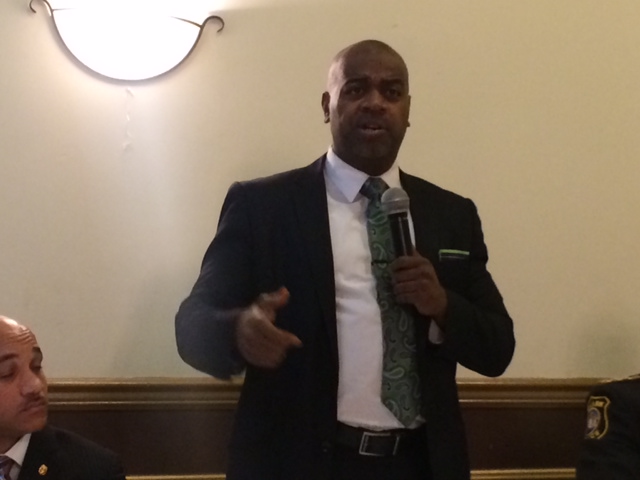